I've promised several times to explain my connection to the small Caribbean nation of St. Vincent and the Grenadines. It's not easy to explain, but I'll try.

Back in 1989, I was 17 years old and very involved with 4-H. I wasn't just sort-of involved. I was VERY involved. One of the most prominent leaders at the state level, a powerhouse of a woman named Luella Zamzow, decided to gather up a group of the 'best and brightest' 4-Hers from across California and groom us to participate at the Model Organization of American States (MOAS) in Washington D.C.

The Organization of American States (OAS) is an international body similar to the United Nations. The primary difference is that member-states are all from the western hemisphere. But the function and purpose is basically the same as the UN. Each year, the OAS conducts a Model OAS (just like a Model UN) for high school students. Typically, each country is represented by a top-notch school (often a boarding school) from the east coast. The students selected for MOAS take preparation courses as part of their schoolwork. In most cases, it's a two-year program of study before they're allowed to participate.

The idea of gathering a group of California 4-Hers, strangers who attended different schools from across the state (public schools, at that), and expecting them to do 2 years' worth of preparations, outside of school, in only a few months? Ludicrous. It's a testament to Luella's reputation that we were allowed to participate in MOAS with the elite prep schools who had been doing this for years. Luella was positive that we 4-Hers would shine. It was a lot of pressure. Luella was someone you didn't want to disappoint.

To tell the rest of the story, here are a few of the pages from my 1989 scrapbook about my experience with MOAS. 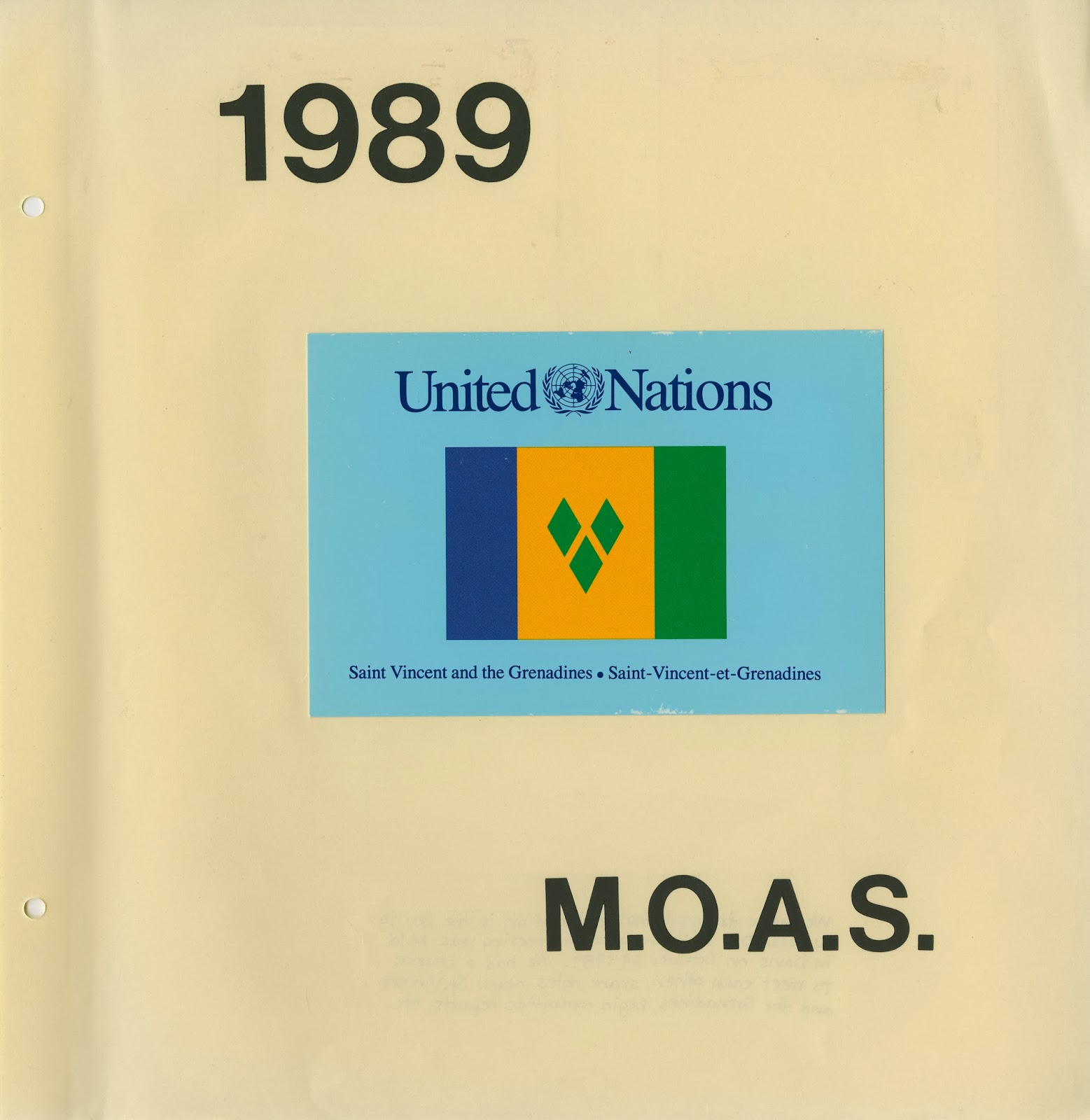 My journey with MOAS began during the summer of 1989 when Luella selected me as a delegate. Preparations began immediately. My assignment was to learn everything I possibly could about the OAS, each of its member states, and our assigned country: St. Vincent and the Grenadines. I hadn't even heard of it before, but I dove in and spent the summer researching and studying.

The nine of us who would comprise the St. V & G delegation (as we affectionally came to call it) met for the first time in late October. Most of us were strangers or vague acquaintances, so a good portion of the day was dedicated to ice breakers, team building, and determining who would work best together. We shared our research, developed strategies for moving forward, and received a ridiculous amount of material to memorize before our next meeting. 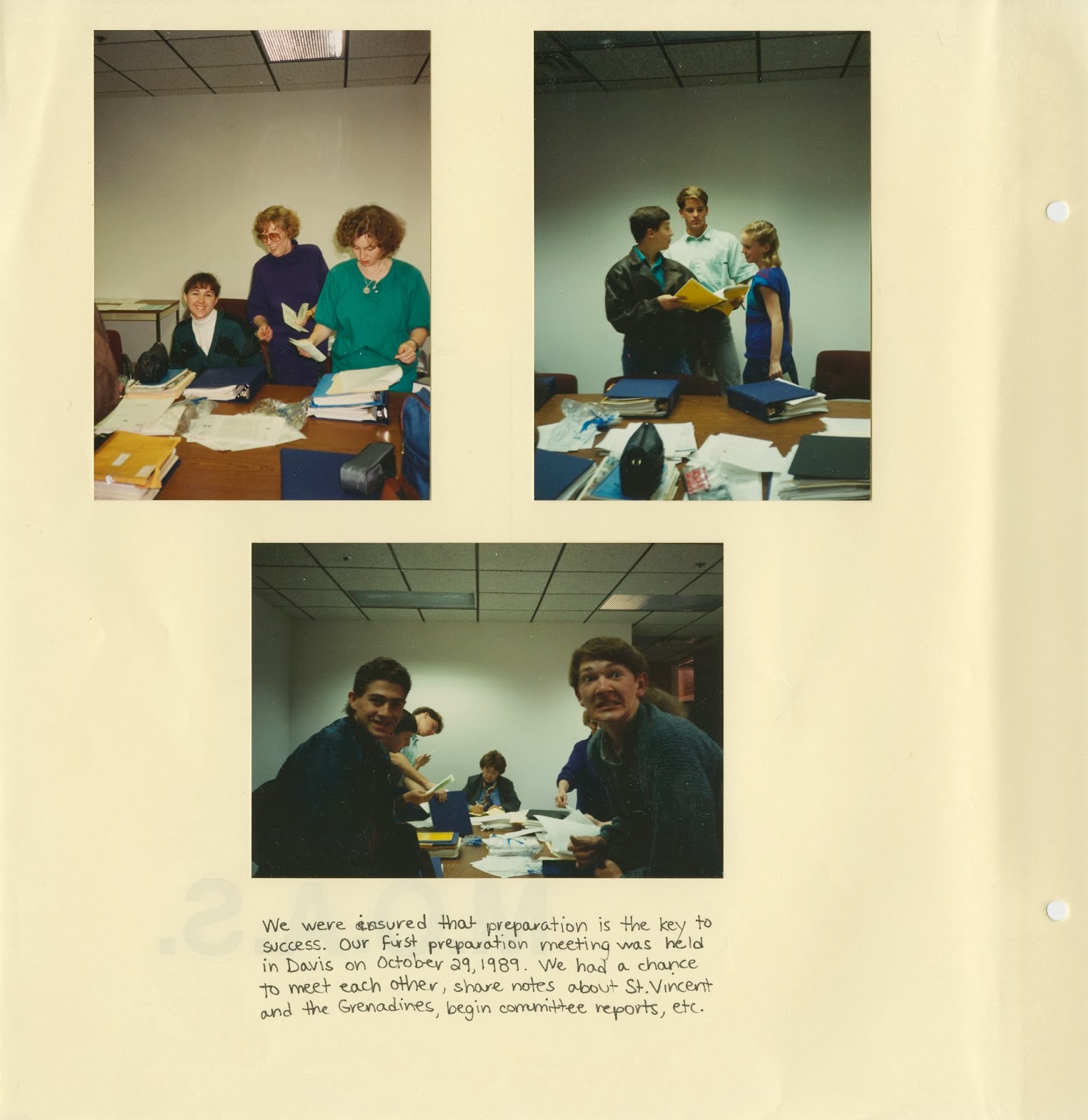 We met in person once more, this time about 4 hours in the opposite direction of the first meeting to make it fair for all participants. After that marathon meeting, I would regularly get packages in the mail of more paperwork to read. Here are pictures of me with 19 lbs. of material that arrived one day for me to read. This was, of course, on top of all my schoolwork. I was still attending high school full-time with AP and college-prep classes. 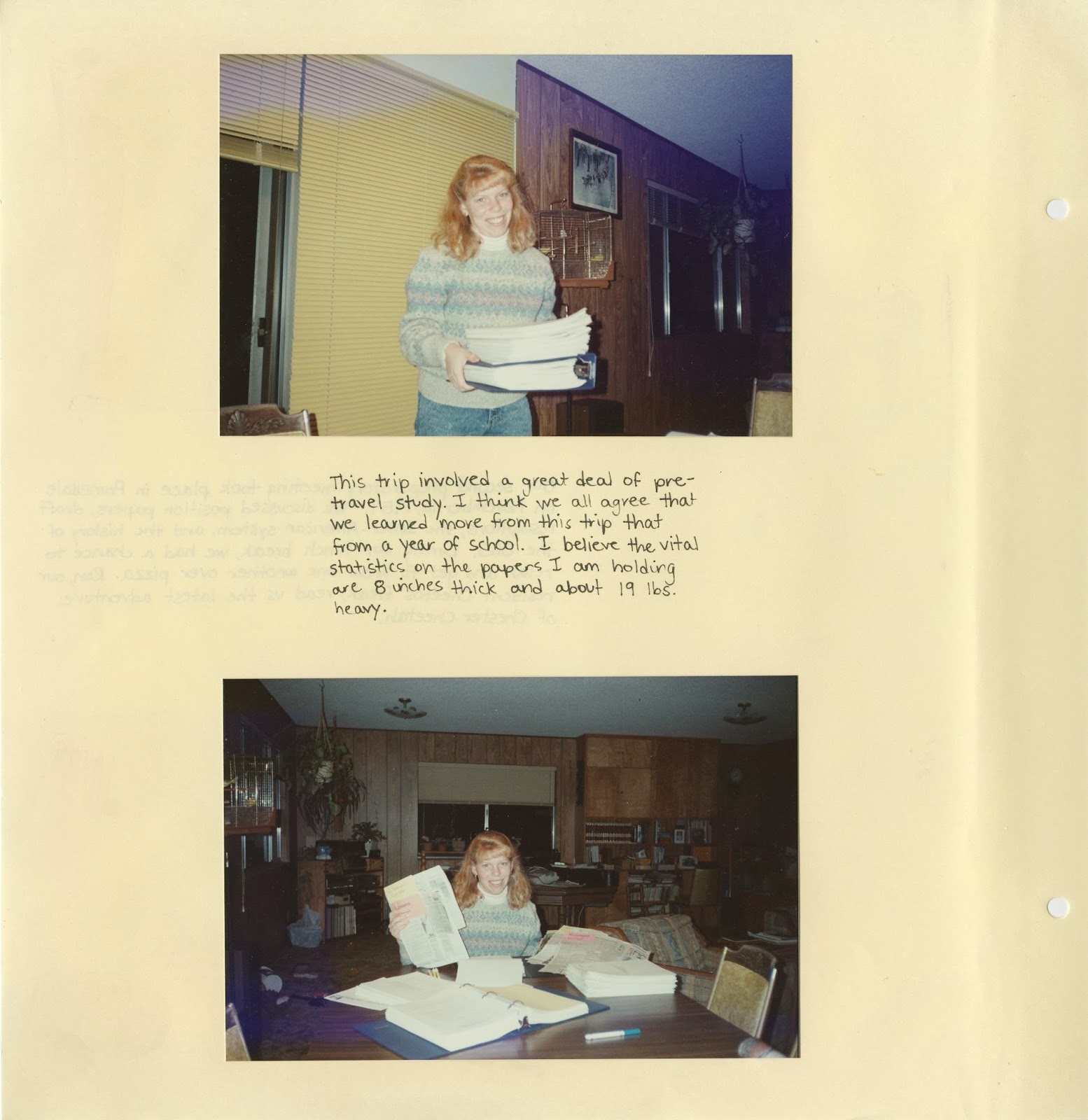 Our trip began on 12/2/89 with an early flight from San Francisco to New York City. Of course, we couldn't relax at the airport or on the plane. We spent the whole time working in pairs drafting position papers or reading more material. Once we arrived in NYC, we had the rest of the weekend for sightseeing, museum visits, shopping, and other fun together, including seeing the Rockettes' Christmas show at Radio City Music Hall.

On Monday morning, we went to the Permanent Mission of St. Vincent and the Grenadines and met with Counsellor Myron Dellimore. We received a very detailed briefing on everything about the country. 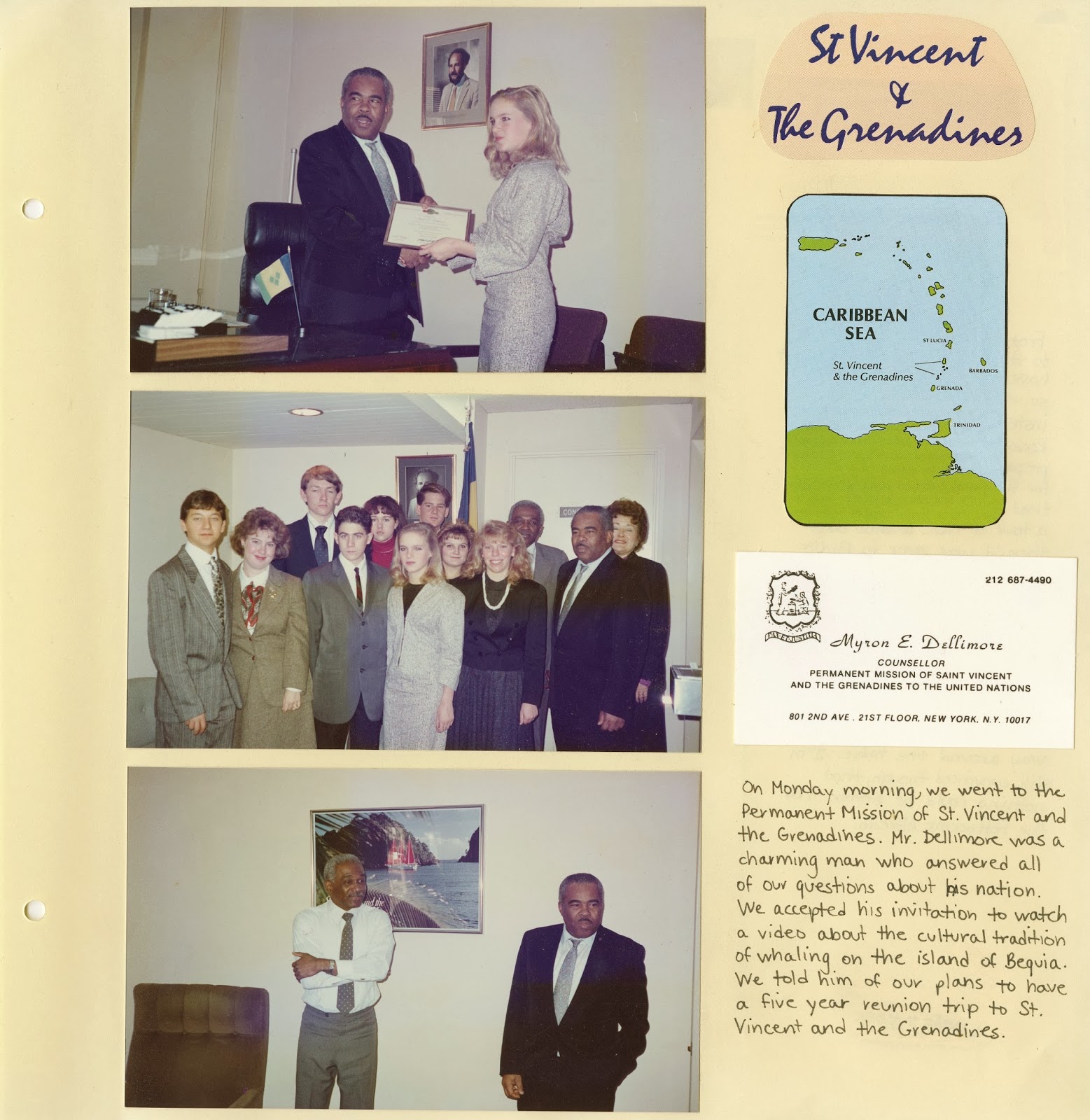 We spent the next two days seeing and doing everything we could in NYC, including the UN, Rockefeller Center, the New York Stock Exchange, and going to the top of the World Trade Center.

We arrived in Washington D.C. on Tuesday night. On Wednesday, we had briefings at the USDA and at the OAS. We spent every free second on the floors of our hotel rooms going through our draft resolutions and improving them with our new information.  Each had to be typed (manually, as this was long before laptops were common). 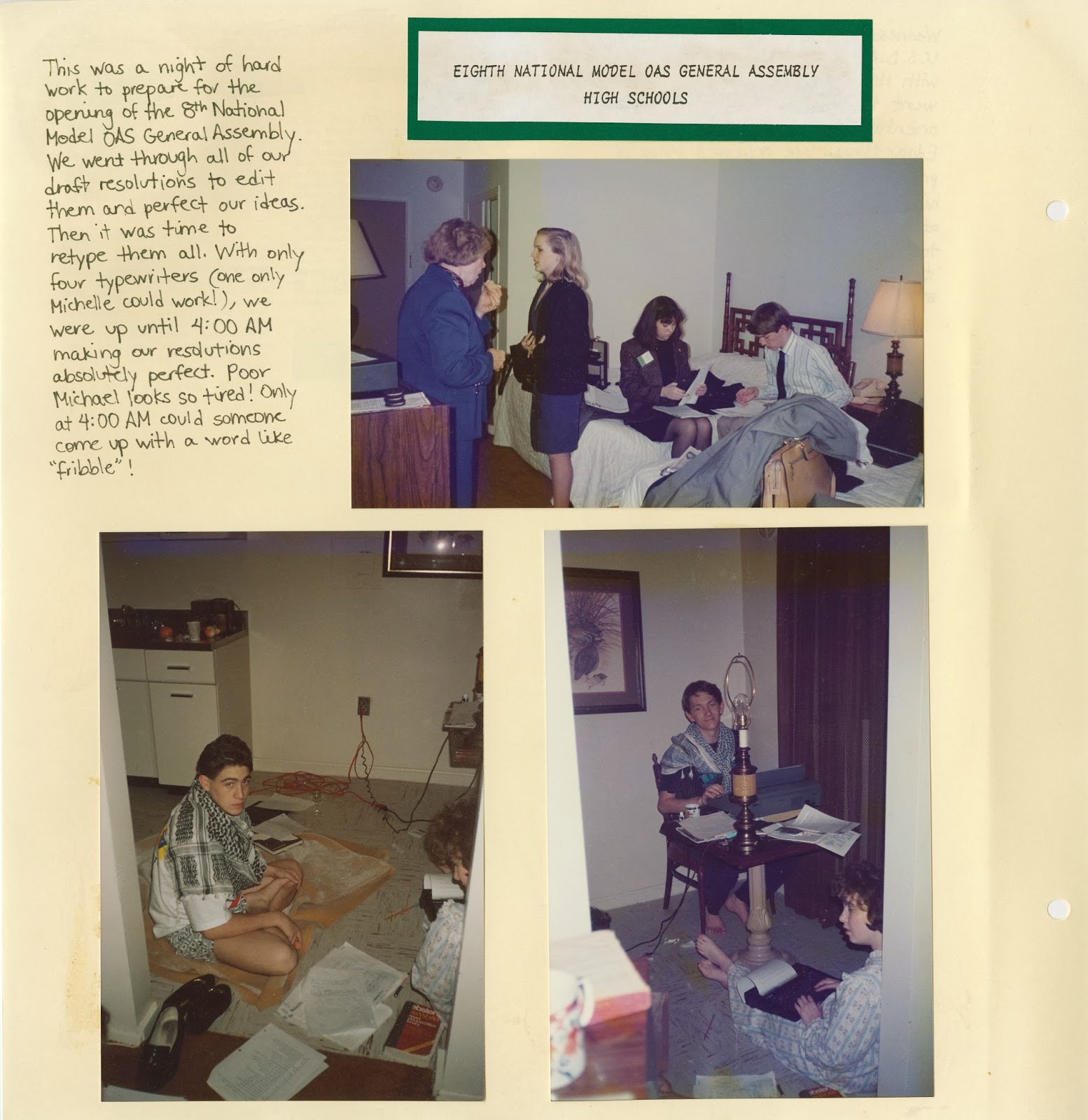 Finally, everything was ready and the Model OAS began. 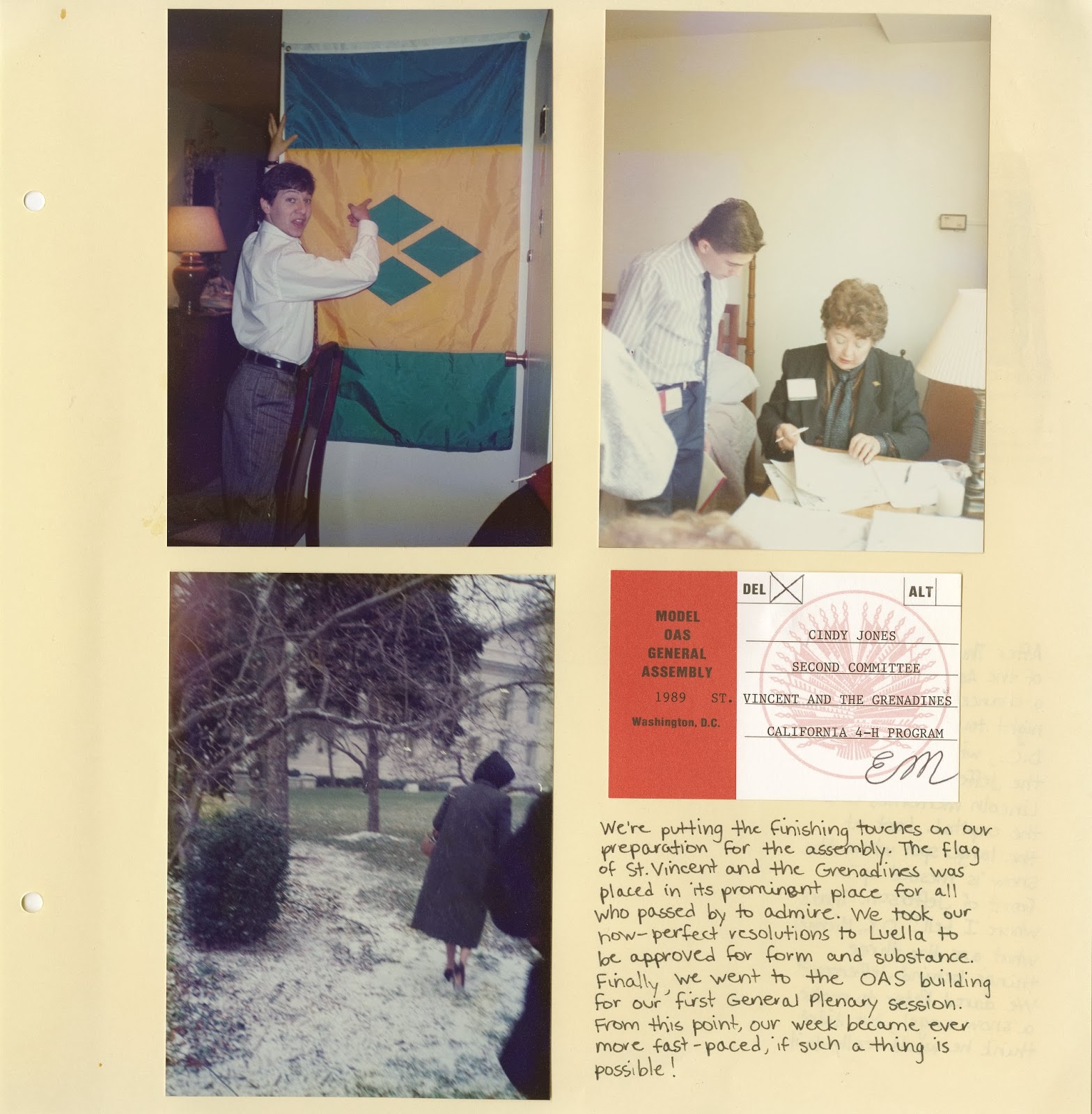 The conference was really intense, but incredibly fun. Our group did exceptionally well and earned a lot of respect. We were just as well-prepared (if not more so) than everyone else. Our participation was a huge success. 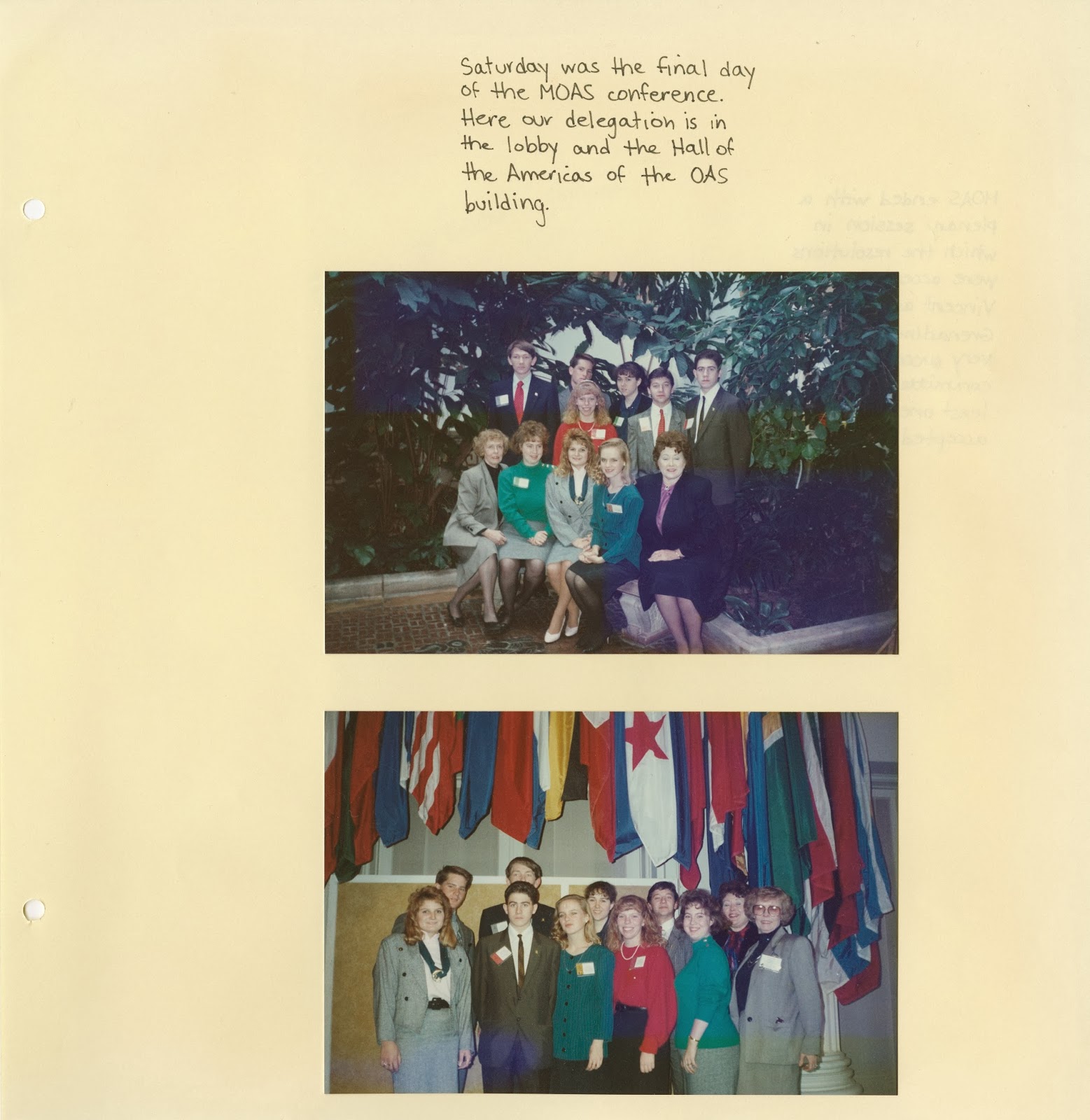 As you might imagine, when a person spends every spare minute for five months studying a particular country in order to accurately represent it at an international conference, you start to feel a strong connection to that country. We weren't just California 4-Hers... we were Vincentians. 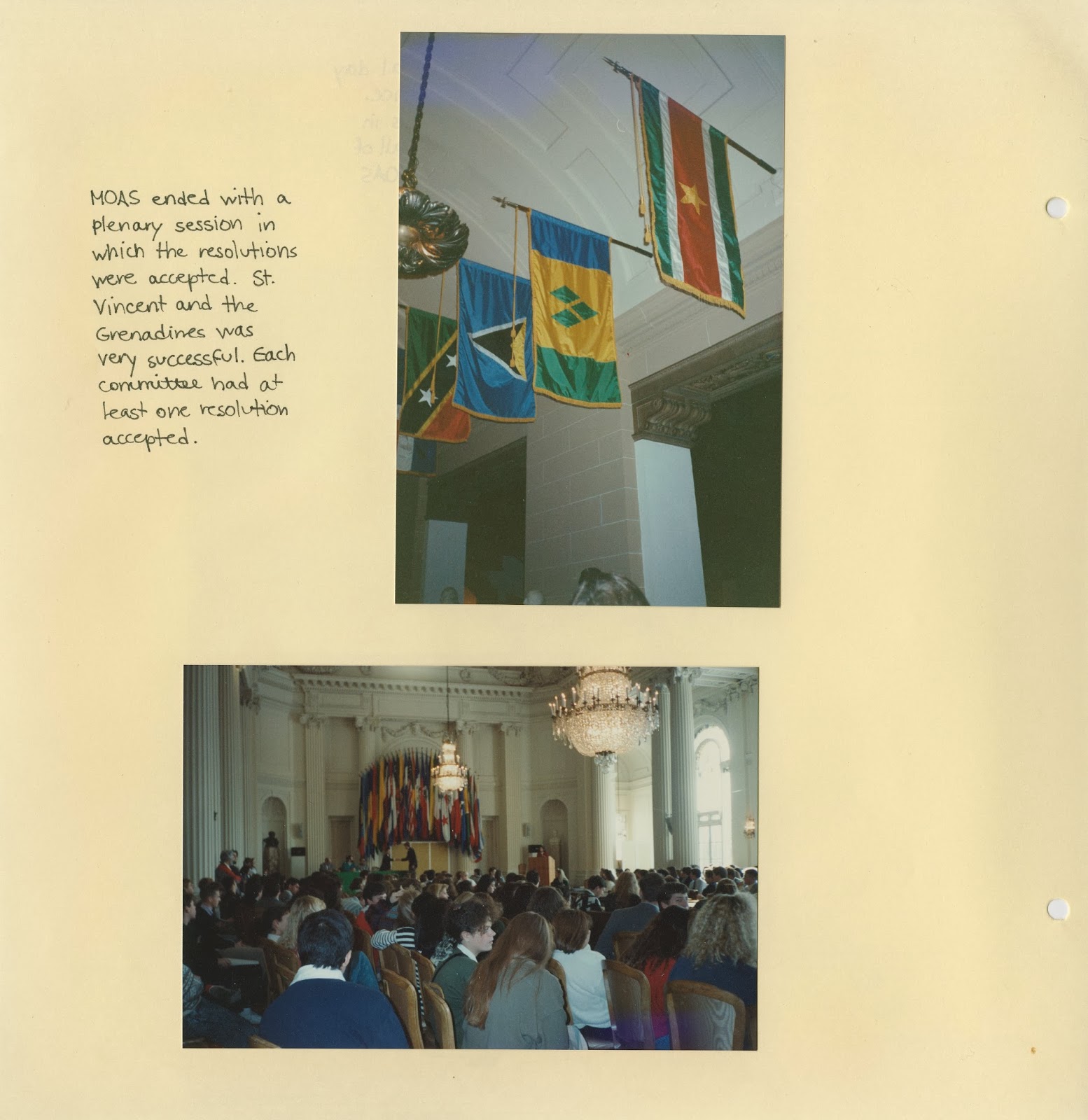 Our MOAS experience didn't end when we returned home after the conference... far from it. We had numerous obligations after the trip. We had several marathon meetings at locations across the state to plan the conferences and trainings we'd be conducting with the information we'd learned.

Here we are at a weekend-long Citizenship conference, introducing younger teens to global issues through a series of activities. We dyed our own t-shirts to look like the flag of St. V & G. 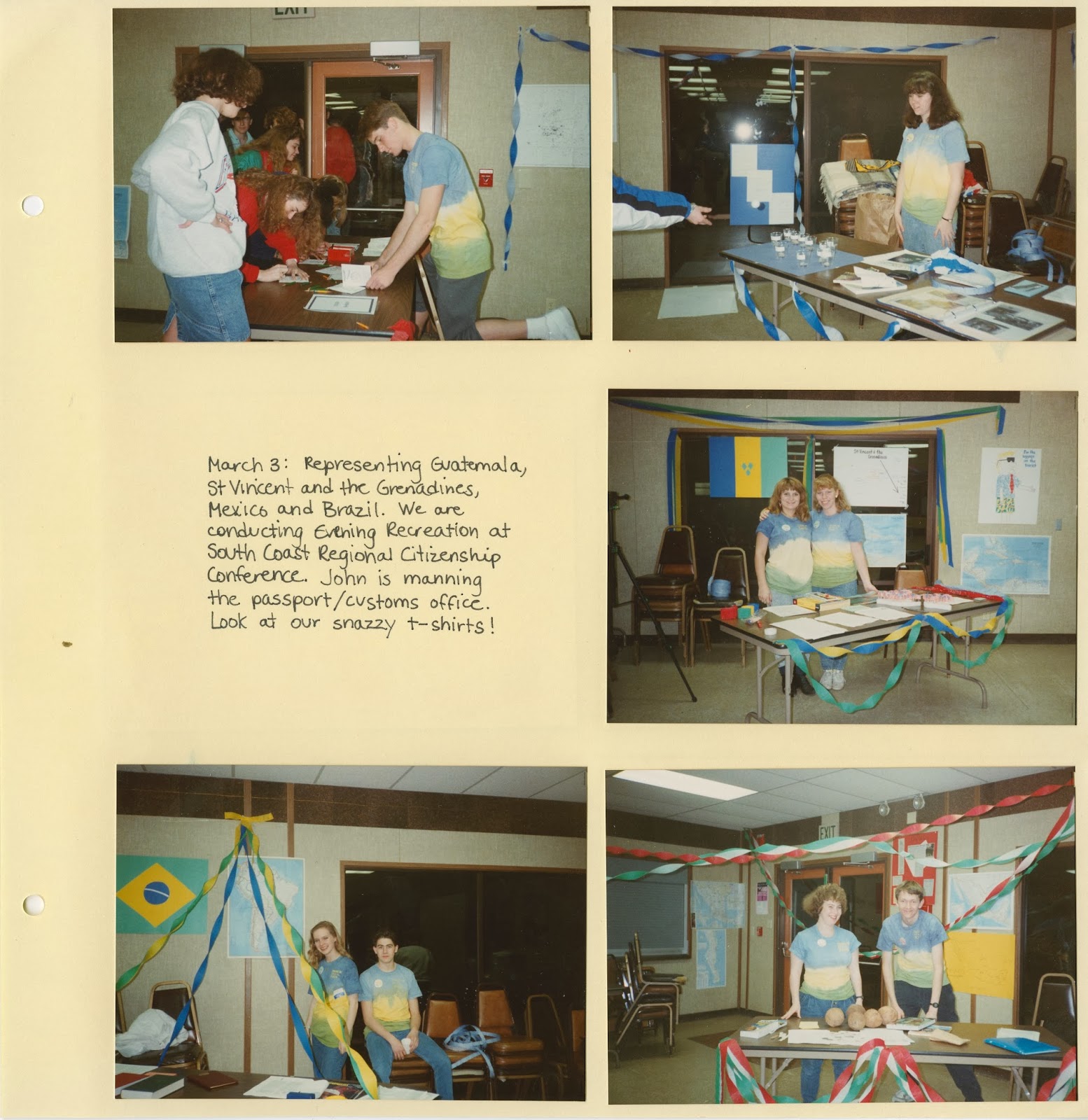 We conducted several of these workshops throughout 1990. In the fall, we hosted a 2-day training for the team that had been selected to represent California 4-H at that year's MOAS.  (I was a freshman in college by then, so I wasn't eligible to go a second time.) 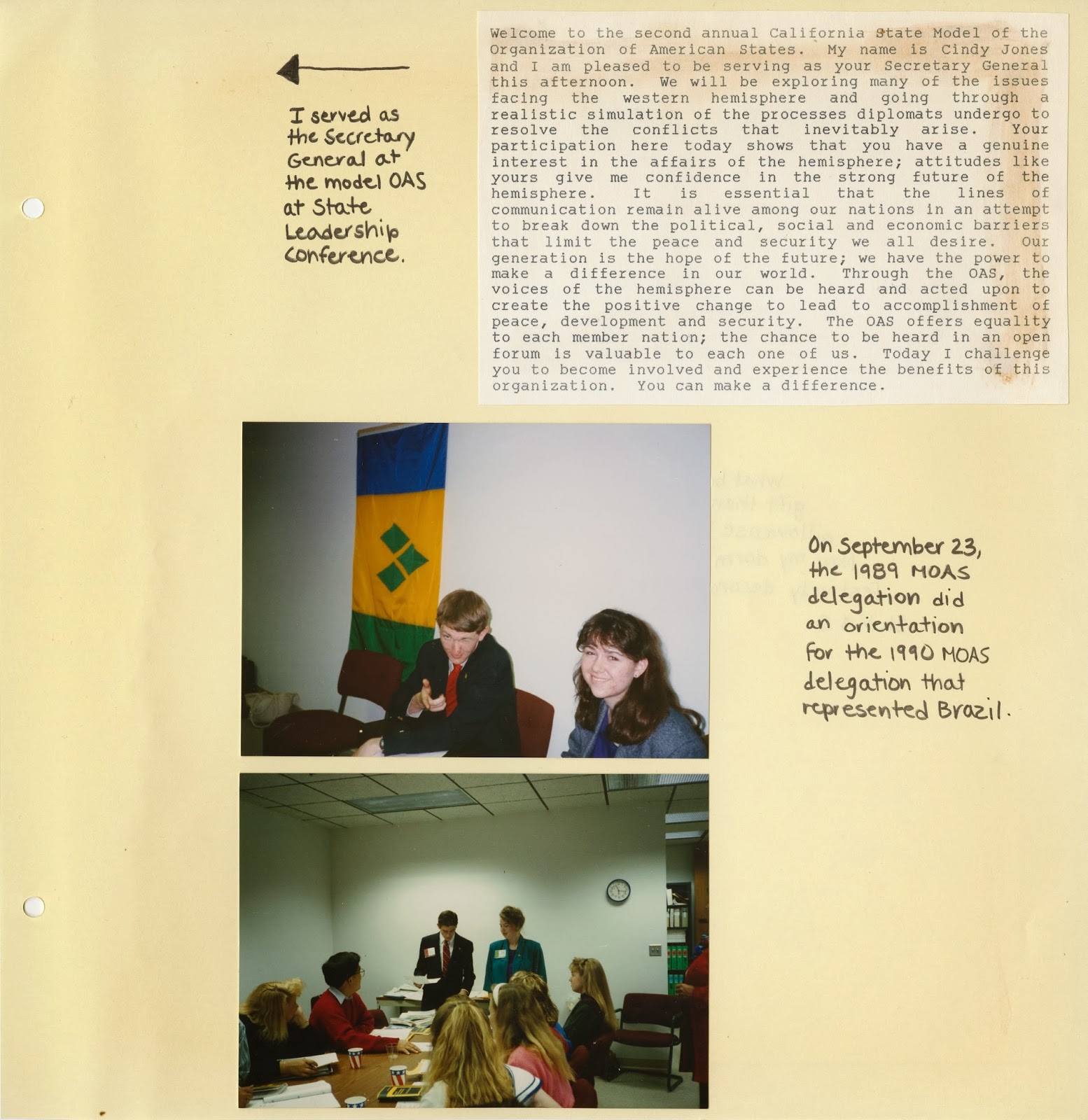 Here we are, conducting another training. 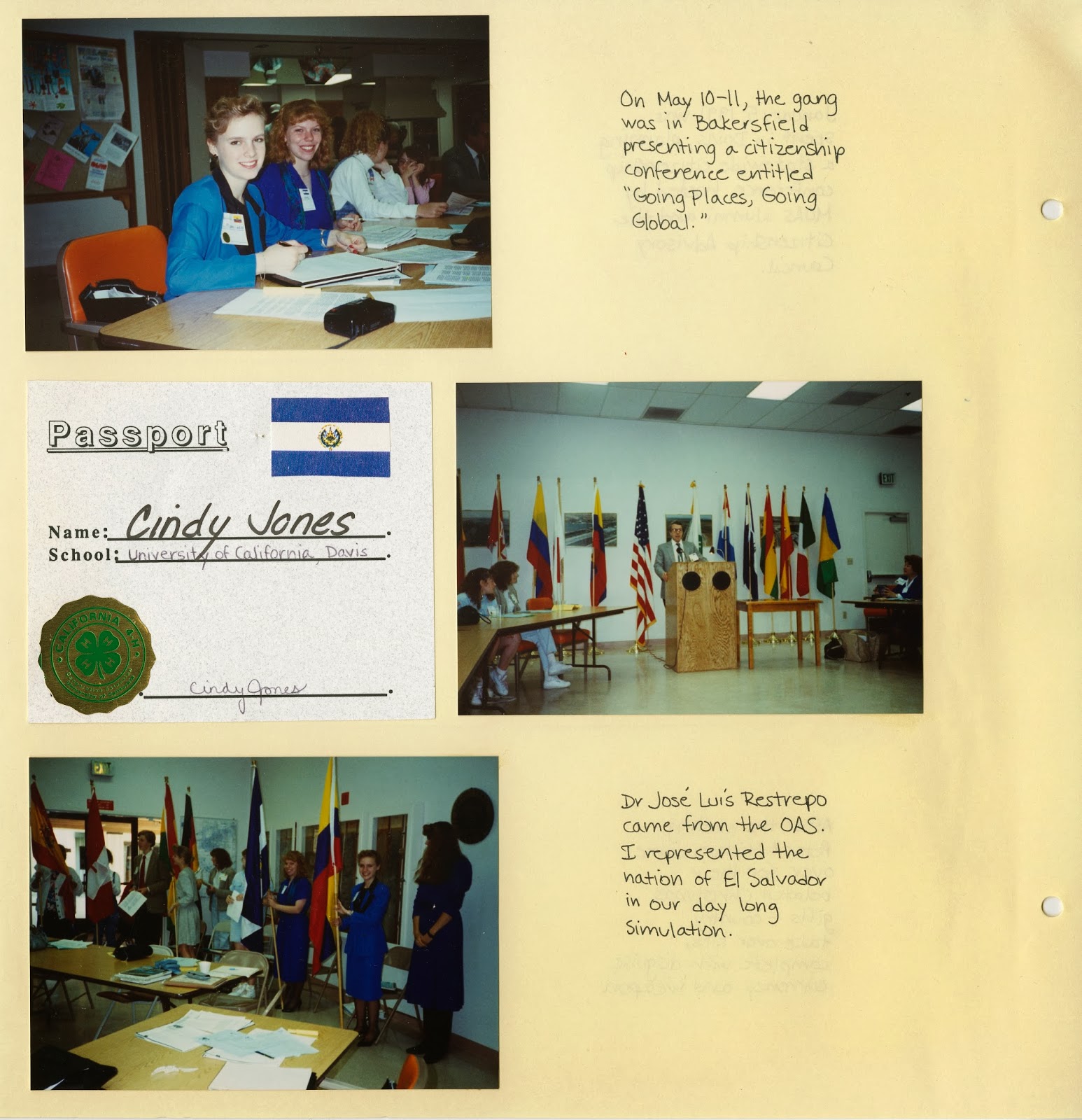 When I was a sophomore in college, I received an interesting call from Luella. What did I think about getting together a team of former California 4-Hers to participate in the MOAS for university students? Once again, we'd be the only group that wasn't from one particular university, making study and preparations that much harder. It didn't matter: I said an enthusiastic yes. (Even if I hadn't been keen on the idea, I probably would have said yes. When Luella asked you to do something, there was no question whether you'd do it or not.)

Our reputation in the high school MOAS was so strong, that we were granted a very high honor, that of representing the United States at the university Model. This was both a blessing and a curse. It required a lot less study (since we were already very familiar with the US and its policies), but even the slightest error would be unforgivable. Every country would interact with the US (unlike St. V & G) and we would have a major role in all of the action. Then Luella shocked me by naming me as Head Delegate. I would lead the US team and be the face of the team for all public addresses. It was, as you can imagine, an amazing experience. I learned so much and had a great time.

It's been almost 25 years (!) since I was introduced to St. Vincent and the Grenadines, but all these years later, I still feel as connected to it as I did back then. I'm proud to represent them in our Family Olympics and I swell with pride to see their athletes competing at the Olympics every four years.  First and foremost, I'm American... but there's no question that in my heart I'm a Vincentian too.
Email ThisBlogThis!Share to TwitterShare to FacebookShare to Pinterest
Labels: 4-H, Memory Lane