Time for Letter F of The Cursive Project! Trevor chose "football" for the day's activity. I thought it would be fun to teach him how to make a stuffed football. My sewing skills are extremely limited to say the least, but I do know enough to teach Trevor how to sew two ovals of brown felt together.

He started by drawing a pattern on butcher paper, then I helped him use it to cut out two pieces of brown felt. Trevor has used the sewing machine only once before (when he sewed his own napkin for the kids' tablesetting contest in 2012), so he needed a full lesson on how to work the machine. After practicing on scraps, he was ready to sew his football. I reminded him to leave one end open so that we could stuff it. He really concentrated and did a great job. 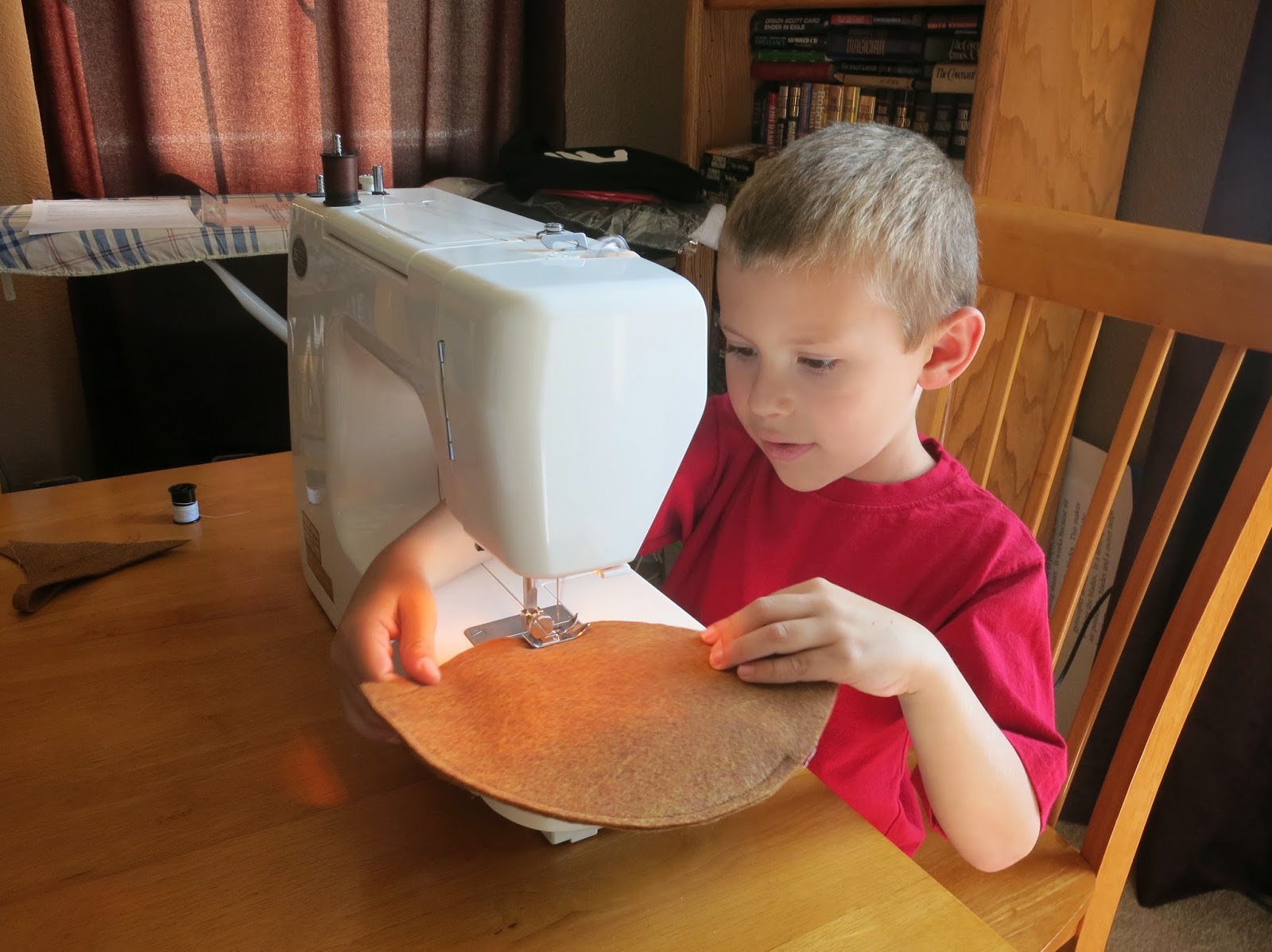 Next, I showed him how to turn the football inside out. Since felt doesn't have a right side or a wrong side, we didn't have to address the whole idea of putting the wrong sides together at the beginning. 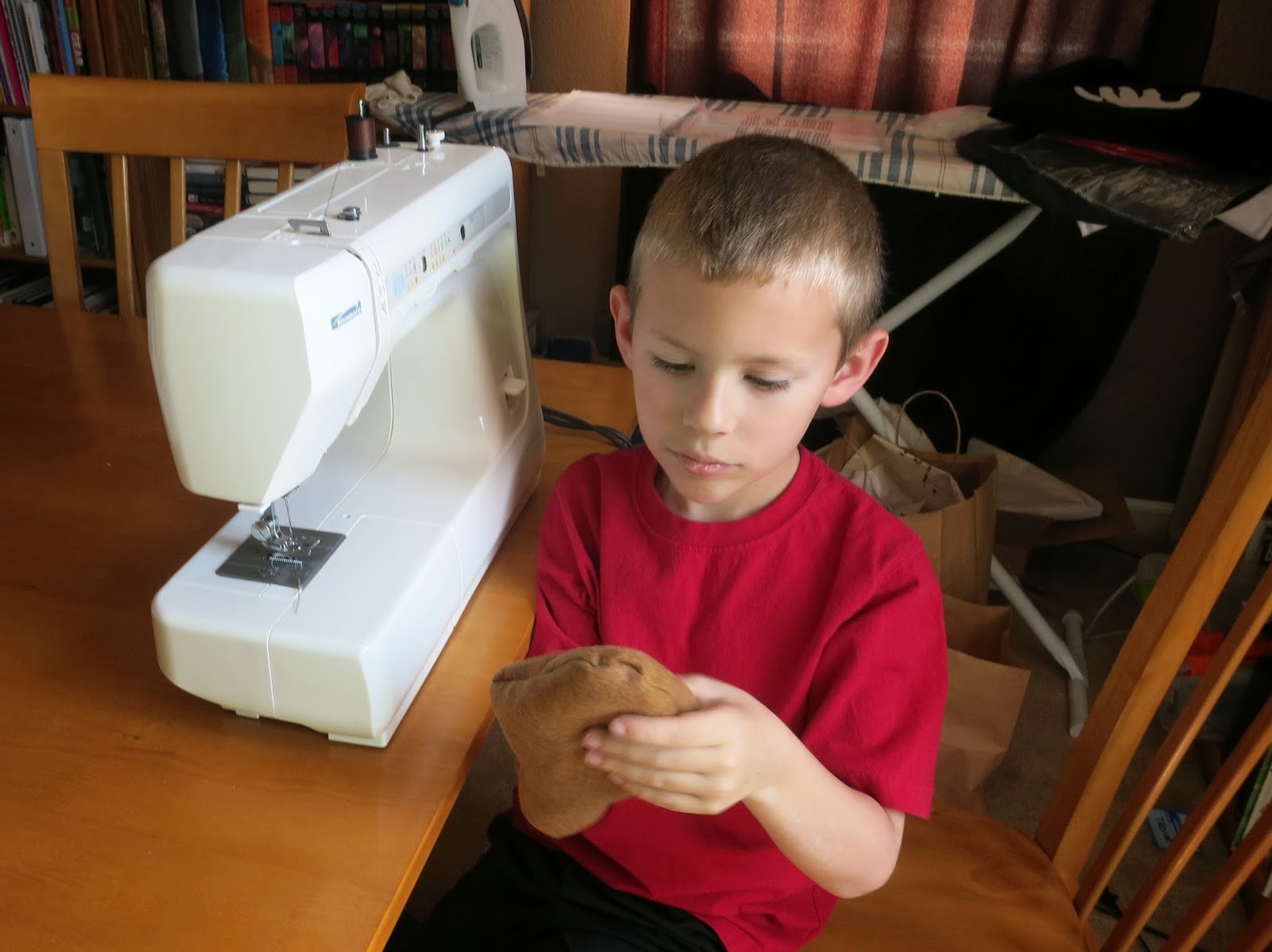 He couldn't get the point of the football to poke out, so I showed him how to use a craft stick to force it into the proper shape. 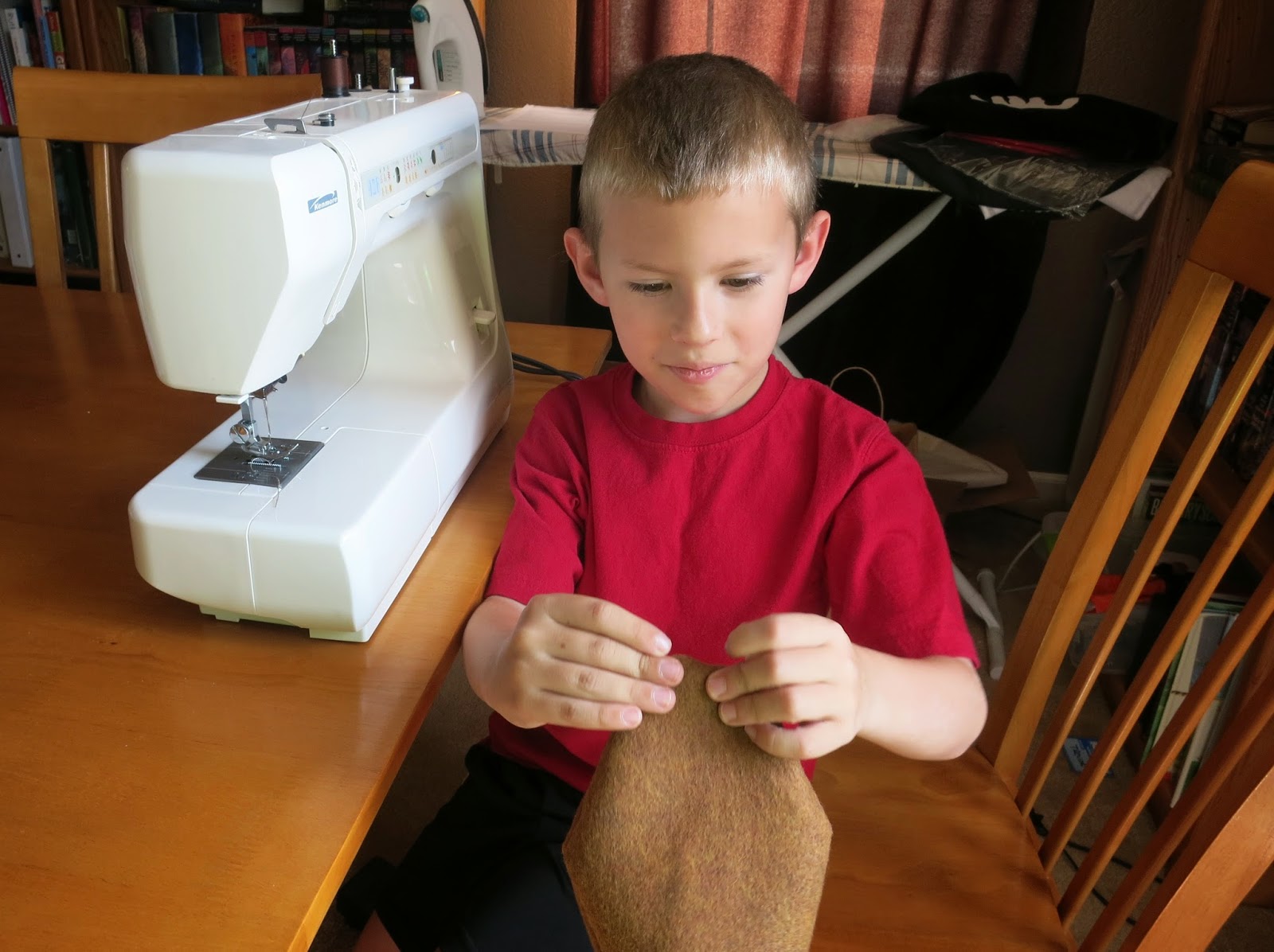 The next step was cutting white felt to make the lines and stitching of the football.  He attached them with craft glue. I'd considered having him sew them in place before stitching the two brown pieces together, but was concerned that his seam allowances might be so large and/or uneven that the lines might look strange. 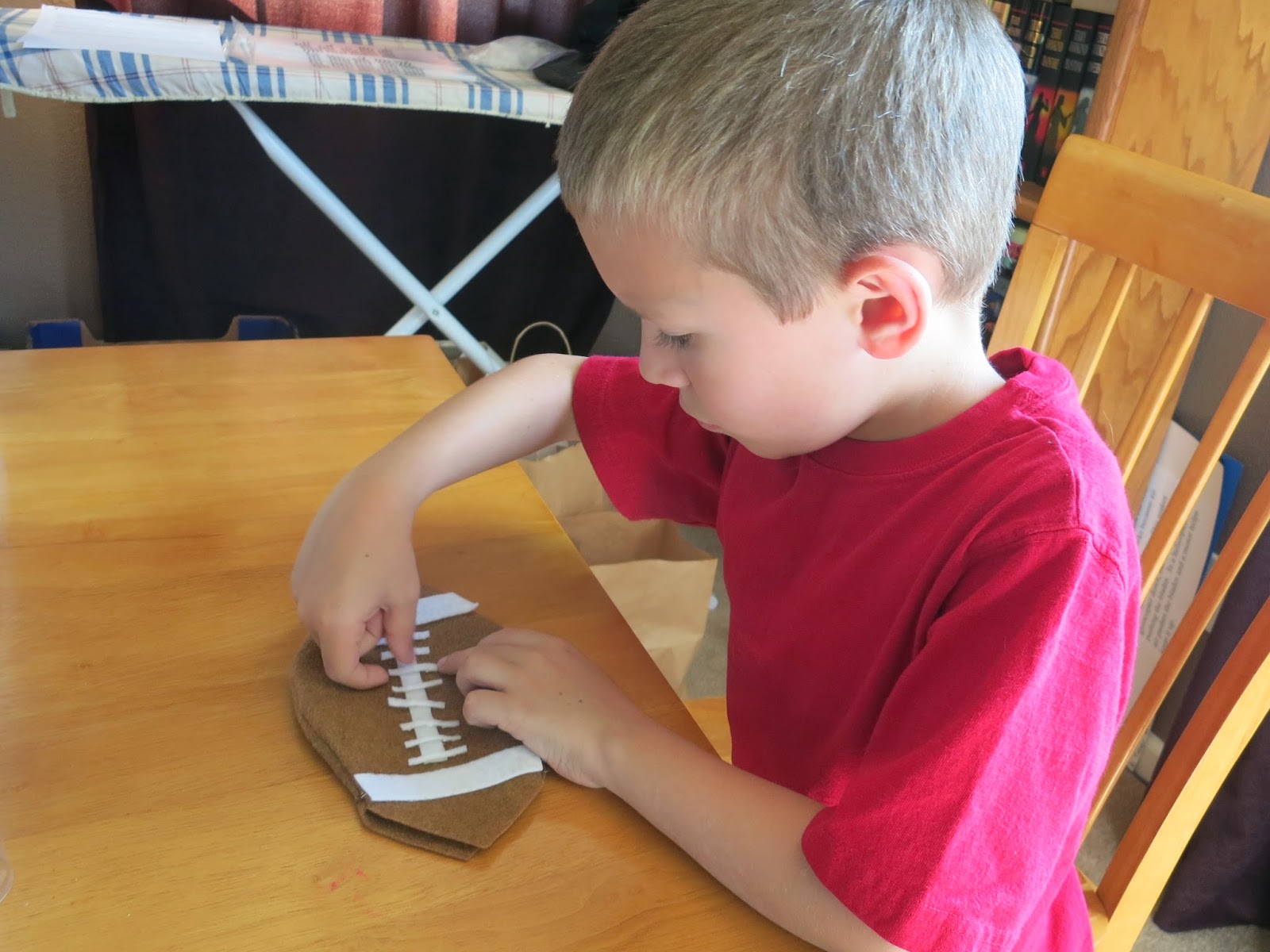 Next, he added fiberfill to his football. I explained the various ways to close the gap. He chose the fastest one (hot glue) because he was eager to use the football to play a game we invented. 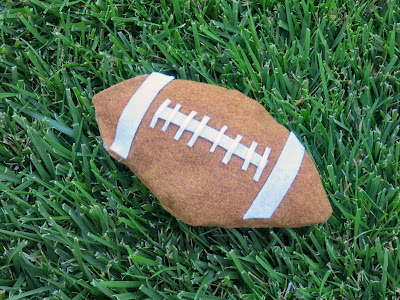 Before we could play the game, we had to make a goalpost. We keep a stash of empty cardboard tubes, so it was just a matter of taping a wrapping paper tube with three paper towel tubes. I asked Trevor if he wanted to paint it to hide the tape, but he did not. 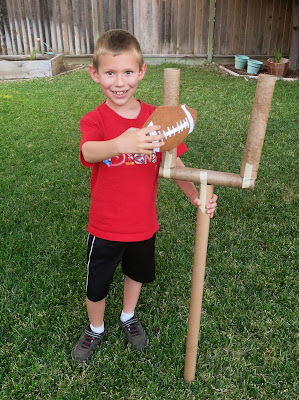 We pounded a random length of metal into the ground, then slid the goalpost over it. Worked like a charm! 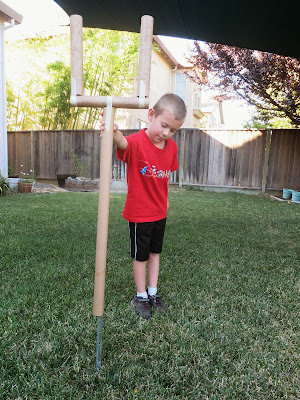 Then we used masking tape to mark lines on the lawn. 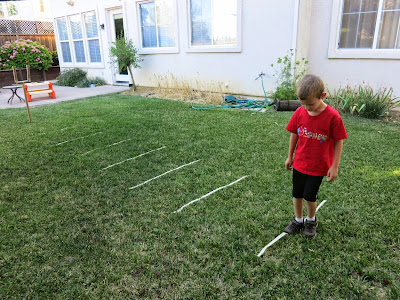 Time to play! The rules are simple. Stand at the orange cones and throw the football into the first space. If you succeed, retrieve the football and throw it into the second space. Continue until you miss. Mark your spot with a colored cone, then it's the next person's turn. In this picture, you can see that Trevor (blue cone) is aiming for the 6th space, while Steve (green cone) is waiting for his first turn to try for the 1st space. 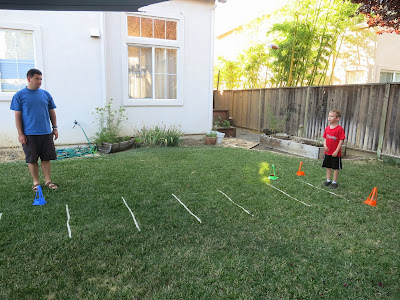 After each round, move the orange cones forward one spot. Here you can see that the orange cones have moved up and that Steve (green cone) is aiming for what is now the 2nd spot. I'm (red cone) one spot ahead and Trevor is in the lead. 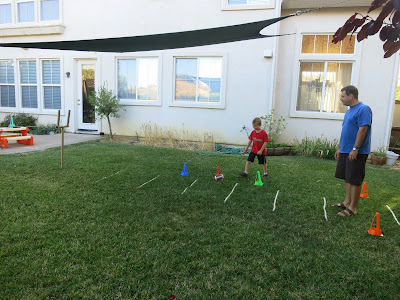 After successfully getting your cone into the final square, attempt throwing it between the goalposts. It's not easy, which is why it's very helpful that the orange starting cones keep moving forward. 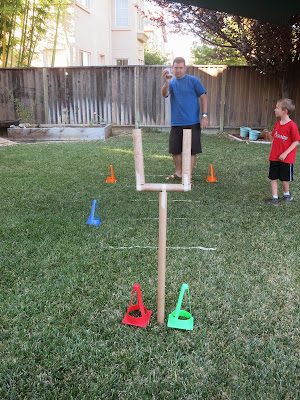 We ended up playing multiple rounds. Trevor and I always got off to an early start, but then Steve would be the one to throw the football through the goalposts. Trevor did end up winning once, but I didn't. I was almost always the first to make it TO the goalposts, but I never made it THROUGH the goalposts. No matter - we had a lot of fun. 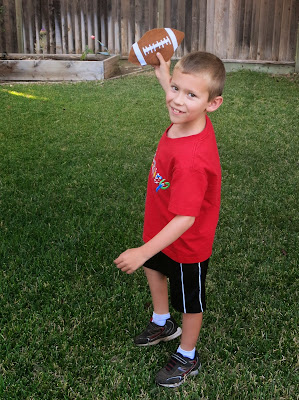