The Tale of Cindy and the City Chicken

Once upon a time several months ago, there was a blogger named Cindy who was mildly obsessed with tasting regional foods while traveling. Cindy and her family would be traveling to the exotic wilderness of eastern Ohio, so she did a bunch of research to learn what foods they should try when they got there.

"Wow!" said Cindy. "I learned that Cleveland is famous for something called 'City Chicken.' We must try it when we visit!" Her husband, Steve, who was very supportive of Cindy's increasing insistence to eat what locals eat wherever they went, answered back. "I've been to Ohio many times," he said, "and I've never heard of City Chicken. I will ask my friends who live there. Maybe one of them can recommend the restaurant that serves the best City Chicken. By the way, what is City Chicken?"

Cindy chuckled, as the story of City Chicken is interesting. "Well," said Cindy, "I read that back in the day, chicken was very expensive and hard to come by in Ohio, where pork was much more common. Chicken was only for the most special occasions, but the Ohioans figured out that they could cut chunks of pork, thread them on a skewer so that the shape mimicked a chicken breast, bread it and fry it, and pretend they were eating fancy chicken instead of ordinary pork." "That is interesting!" said Steve. "I would like to try it, too!"

Steve talked with his friends in Ohio. "We have never heard of City Chicken." they all said. Cindy checked the online menus for dozens of restaurants and none of them served City Chicken. She was confused. Was City Chicken merely a myth? "Wait!" said Cindy. "I found two restaurants that serve City Chicken as a weekly special. But it is not offered on the nights we'll be there." "Oh no!" said Steve.

Cindy and her family traveled to Ohio and did not eat City Chicken. But on the last day of their trip, something exciting happened! Cindy relayed the disappointing story of the City Chicken to their lunch companion, Amanda. "I've lived in Ohio my whole life," said Amanda, "and I've never heard of City Chicken. Let me text my dad and see if he's heard of it." PING! "Not only has my dad heard of it, but apparently his wife makes the best City Chicken ever!" said Amanda. "I am going to invite myself over to have her City Chicken some day!"

Alas, Cindy could not invite herself to Amanda's dad's wife's house for dinner. Cindy had no choice but to make City Chicken at home so she could finally try it. She found a promising recipe, bought the ingredients, and got started. The first step was to cut pork tenderloin into 1.5" chunks, then thread them onto skewers. They went into an egg wash, then into Saltine cracker crumbs. Then she seared them on all sides. "So far so good," she thought, "but this doesn't quite look like chicken. I think I put too many pork cubes on each skewer." 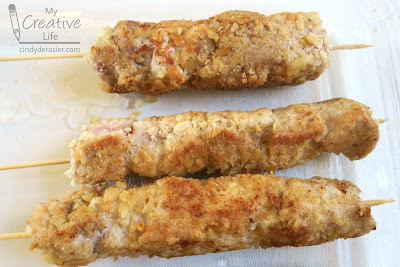 Cindy put the seared skewers in a pan, poured a mixture of chicken broth and flour over them, covered the pan with foil, and put it in the oven at 350°F for 50 minutes. "This is weird." said Cindy. "The crispy breading will surely come out soggy. Maybe it's supposed to be that way." While the City Chicken cooked, Cindy made mashed potatoes and green beans. She'd read that they were the proper accompaniments to City Chicken.

BING! Cindy uncovered the pan and baked the skewers for 10 more minutes, as the recipe stated. But alas, the City Chicken was still soggy. The gravy was a solid instead of a liquid. "Maybe this wasn't the best recipe," Cindy said. "I can't get the City Chicken off the skewer either." "Is it supposed to come off, or do we just eat it off the skewer?" Steve asked. "I don't know!" Cindy answered. 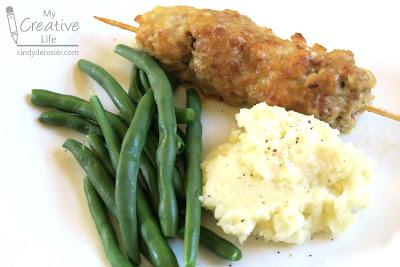 The City Chicken was delicious and the whole family agreed they'd like to try it again. "I want someone who has a good recipe and knows what they're doing to make it for us next time!" The family agreed. Perhaps someday their wish will come true!
Email ThisBlogThis!Share to TwitterShare to FacebookShare to Pinterest
Labels: Ohio, Recipes, regional food