One of my favorite things about blogging is that I can tell more of the story and include more photos of an event than I can squeeze onto a scrapbook layout. So while I want the important photos and the story to appear in the album, it helps knowing that the details are preserved here on the blog. Because I shared so many details from Trevor's narwhal-themed ice skating birthday party back in June, I didn't feel compelled to include close-ups of the narwhal items we made on the layout. Instead, I packed it with photos of Trevor and his friends having fun. 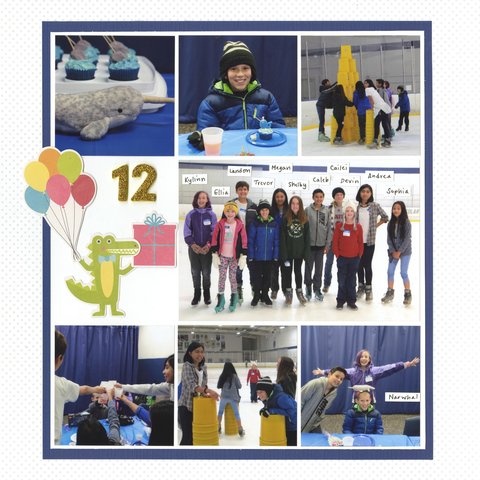 I debated whether to include the grinning alligator on a page about a narwhal-themed birthday, but I couldn't resist. He fit the space perfectly and looks so cute holding the present and the balloons.

You may have noticed that the only journaling I did was to label the kids (and Narwhal). The photos answer the rest of the basic questions:


You might argue that, years from now, one of Trevor's descendants won't know when his birthday was and thus what year this took place. Nor will they know which ice rink we visited. But I'd argue that both of those questions are answered by other layouts in the same album. For the record though, I'll note both of those here, with the optimistic (though perhaps unlikely) expectation that my blog will be accessible to future generations: This party took place at Vacaville Ice Sports on June 8, 2018, the day after Trevor's 12th birthday. And it was awesome.
Posted by Cindy deRosier at 5:00 AM