Happy Halloween! I'll be sharing Trevor's costume next week. In a way, it relates to this post!

Like most families, we eat dinner every evening. Unlike most families, we turn dinner into a game whenever possible. Jonna's most recent visit was the perfect opportunity to try Trevor's Tasty Tournament, a cooking challenge Trevor created based on Guy's Grocery Games.

Trevor's Tasty Tournament began with a dice roll to determine who would cook in each round (appetizer, entree, and dessert). Jonna won and selected the appetizer round. Trevor won the second dice roll and selected dessert, leaving me with the entree. Then it was time to determine which games we'd be playing. Recognize what Trevor is holding? It's a maze game from his Maze Party, with rubber bands arranged to create a Plinko board. 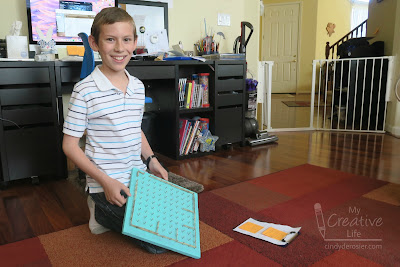 Trevor designated a game for each of the five sections where a marble could fall. From left to right, the games were: Grocery List, Budget Battle, One From Every Aisle, Letter of the Alphabet, and 8-Item Express Lane. Jonna went first. Her marble fell in Letter of the Alphabet. Trevor removed the plastic letters from the fridge, put them in a bag, and pulled out M. Jonna would be creating an appetizer using ONLY ingredients that start with M.

My marble fell in One from Every Aisle. I would be making an entree using exactly one ingredient from every aisle of the grocery store. This was by far the most challenging of the potential games, so I was looking forward to giving it a try. I'm always up for a challenge!

Trevor got Budget Battle. He would need to make a dessert using a budget of $15. He lucked out. It's pretty easy to make dessert for under $15.

With our limitations set, we drove to the grocery store. Jonna searched for M items while Trevor monitored that I got exactly one item from every aisle. He wouldn't let me think about things and return to an aisle; I had to grab one thing and move to the next aisle, just like on the show. It was about 100 times harder than I thought it would be. I needed time to think and plan, but alas, no. When my shopping was done, Trevor did his shopping, calling out prices for me to record as he selected his items. We met up at the checkout line, purchased our ingredients, and headed home. 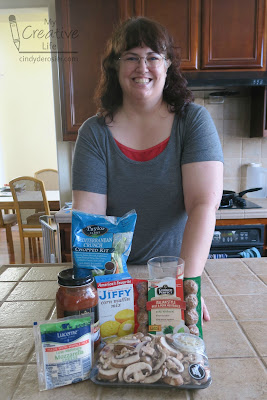 She made mozzarella-stuffed meatballs and breaded them with muffin mix before baking. She served the meatballs on a bed of Mediterranean mesclun with mushroom marinara sauce. 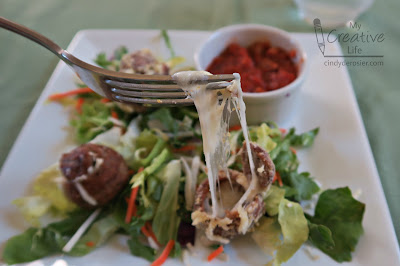 It was delicious! The judges weren't convinced the muffin mix added much, but praised Jonna's use of M ingredients and her restraint in not making us eat mustard marshmallows. 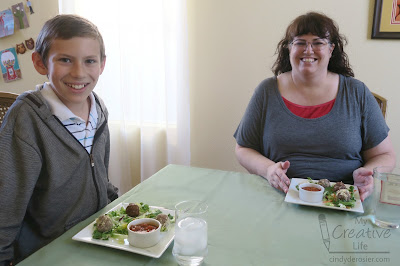 After our delicious appetizer, it was my turn to make an entree out of... what, exactly? I couldn't even remember some of the ingredients I bought, as the shopping experience of picking one thing per aisle was pretty much just a blur. Fortunately, Trevor had taken notes to ensure I didn't cheat and skip an aisle or get more than one item per aisle. My ingredients included: ground beef, a bell pepper, frozen avocado chunks, canned tomatoes, ranch dressing, root beer, kaiser rolls, Fritos, raspberry jam, seasoning salt, cauliflower fries, and Monterey Jack cheese. Ack! 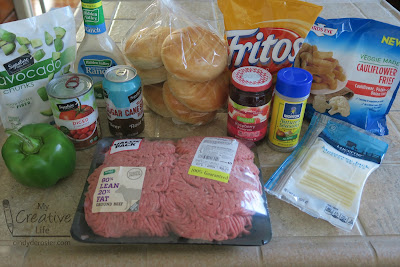 I chopped the pepper, then cooked it in root beer, added raspberry jam, and let that reduce. I seasoned the meat with the seasoning salt and then made patties. The cauliflower fries went into the oven. So far, so good. I put the tomatoes and avocado and a little bit of ranch in the blender to make a dipping sauce for my fries. But then I made a big mistake. I added some Fritos to the blender. I was not prepared for the repulsive color or texture that resulted. Ugh. I added more chunks of avocado to the horrifying glop I'd made, thinking that might make it look less like something that had already been eaten, but it didn't help much. I toasted the rolls and spread them with the reduced pepper-root beer-raspberry sauce, added a hamburger patty, and melted the Monterey Jack on top. It is one of the ugliest meals I've ever served, but it tasted good. 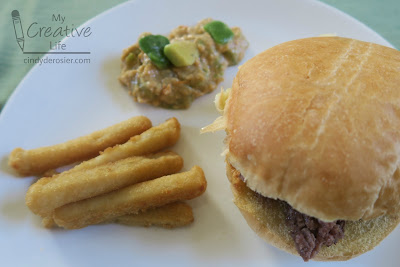 The judges were critical of my glop, of course, and didn't like that I hadn't altered the fries at all. They liked the burger and praised the unique sauce; everyone was surprised how well root beer and raspberry worked on a hamburger. 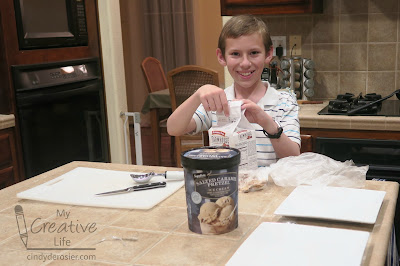 He sliced the peaches and cooked them in caramel sauce until they were soft. Then he chopped the almonds. Each plate got two cookies, a scoop of ice cream, peaches, and almonds on top. 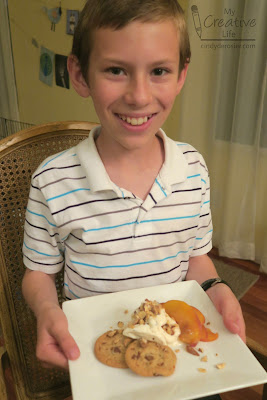 While the judges felt he should have made either the ice cream or the cookies or both, they knew he was limited by the budget. He couldn't have afforded all the individual ingredients he would have needed. The judges applauded his decision to get almonds from the bulk bins so that he could get only the amount he could afford. And the dessert was delicious!

Trevor's Tasty Tournament was a great success and we're looking forward to trying it again sometime soon.
Posted by Cindy deRosier at 5:00 AM