This fun Halloween craft was one of my favorites back in my teaching days. Not only does it have tons of room for creativity and use inexpensive supplies, but it gave my 5th graders a chance to practice cutting out counters. For many of them, it was a new skill. 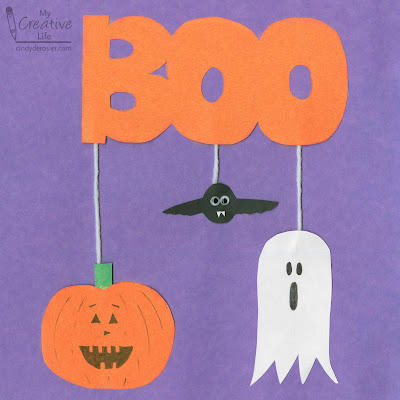 Lightly write the word BOO in large block letters on a piece of orange construction paper. The letters should overlap slightly. Carefully cut out the BOO, cutting just inside the lines you drew so they don't show. Cut out the counters by using the tip of the scissors to poke a hole in the middle of each, then cut from that hole to the line. Do this several times to create flaps that will open up space for the scissors. Once you have a large enough space, cut out the entire counter just outside the pencil line.
Create the items you want to dangle from the BOO. I chose a jack-o-lantern, vampire (in bat form), and a ghost, but you could include all sorts of other items.
Cut three lengths of yarn and glue one to each of the dangling items. Glue the other end of yarn behind the BOO, placing it so that the dangling item hangs at the desired place.
---------
Every once in awhile, I had a student who did not celebrate Halloween and did not feel comfortable making Halloween crafts. Since the point of this craft is about developing scissor skills and being creative, the content doesn't really matter. I remember one student changing the word to FALL (which still has counters) and dangling leaves from it. Perfect!
Email ThisBlogThis!Share to TwitterShare to FacebookShare to Pinterest
Labels: bat, construction paper, Crafts for Kids, ghost, googly eye, Halloween, My Teaching Days, pumpkin, yarn