Can You Put These Iconic Art Supplies in Chronological Order?

When we were at the Folsom History Museum, Steve and I played a really fun game based on putting technological advances in chronological order. This got me thinking. It would be fun to pick 10 classic craft materials and guess the order in which they were invented. The game we played at the museum had cards and rules, but you can just write your guess down on paper. Speaking of which, the exact date paper was invented is unknown, but it is thought to have been on or before 105 CE. 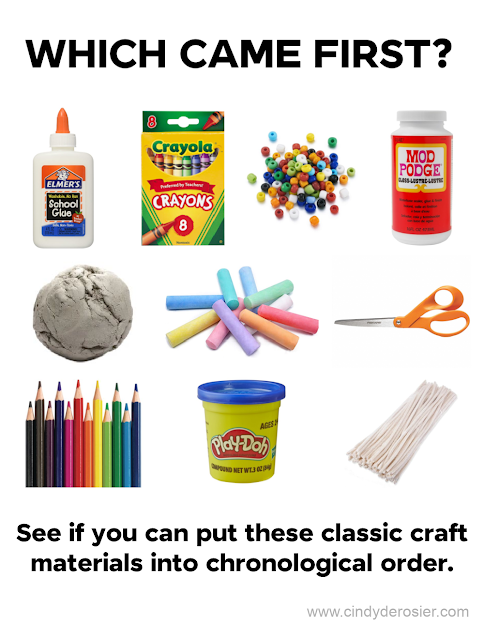 Put the following art materials in chronological order, starting with the earliest.

For an extra challenge, write down your best guess of what date each was invented. When you're done, read on to see if you are right!
---------

I've added an affiliate link to the name of each craft material. As always, thanks for supporting this site.

Technically, clay wasn't invented, it was discovered. But there's no question that it's the earliest. People have been using clay as a craft material since approximately 14,000 BCE.

It's impossible to know the exact date, but glass beads were probably first made around 2000 BCE. Handmade beads were developed around 4000 BCE and glass was invented about 2000 years later.

Chalk has been used by humans for a really long time, but it wasn't until the 1500's that artists started using chalk specifically on sidewalks to earn a living.

Crayola Crayons were invented in 1902 and first sold in 1903. Alice Binney came up with the name Crayola, which joined the French word "craie" (stick of chalk) and "ola" from "oleaginous" (oily). Now, Crayola makes over 3 billion oily sticks of chalk each year in 152 colors, including metallic and glitter crayons.

Once again, there is no clear-cut answer to when colored pencils used for mark making were invented. But we do know that the first artist-grade colored pencils were made by Faber-Castell in 1908.

Chenille stem pipe cleaners were invented in the 1910's (no exact date known, but the inventor died in 1922, so it's before then). Fun fact: He also invented the streetcar transfer ticket.

The first multipurpose white glue, then known as Elmer's Glue-All, was introduced in 1947. (The innovative twistable orange cap didn't come until 1962.)

Play-Doh was born in 1955 and first demonstrated at an educational conference in 1956. The substance was a based on a wallpaper cleaner from the 1930's.

Fiskars introduced plastic-handled scissors to the world in 1967. These ergonomic scissors are the most popular product made by the 373 year old company. It's a lucky accident that they are orange.

Mod Podge (short for Modern Decoupage) was invented in 1967 and introduced commercially soon after. There are now 17 varieties of this beloved all-in-one, glue, sealer, and finish.
----------
How did you do? What surprised you? Let me know in the comments!

Email ThisBlogThis!Share to TwitterShare to FacebookShare to Pinterest
Labels: trivia