Awhile back, I shared State Capital Trivia. That covered state capitals-with-an-A, not capitols-with-an-O. As a reminder, when you spell capital with an A, you are referring to the city. Capitol with an O refers to a building. Today's questions are all about those buildings that house state government. 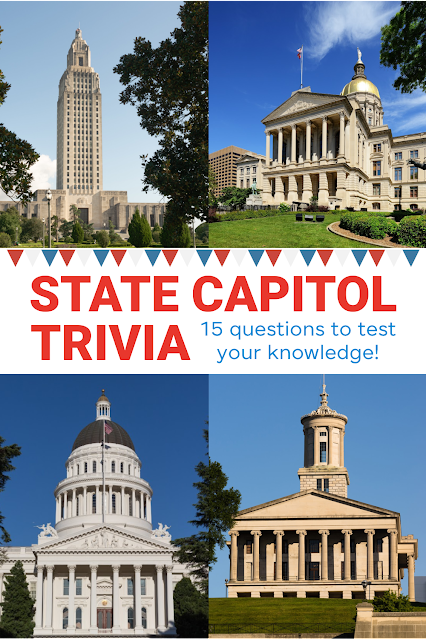 1. Most states use "Capitol" for their seat of government, but others use "Statehouse" or "State House" or "Legislative Hall." How many of the 50 states have a "Capitol" building?

1. Two states use "Statehouse" and eight use "State House." Delaware uses "Legislative Hall." That leaves 39 states with a "Capitol."
2. At 450 feet, the 34-story Louisiana State Capitol is the tallest.
3. At 35 feet, the New Mexico State Capitol is the shortest.
4. The Maryland State House was completed in 1797 and has been in continual use ever since.
5. I would have guessed that the answer was Hawaii since it's the newest state, but its Capitol was built in 1969, eight years before the Florida State Capitol was built in 1977.
6. The Texas State Capitol is not the tallest, but it's the biggest.
7. The New Mexico State Capitol is round.
8. It's a tie! There are six capitols found on "Capitol" (Street, Avenue, Court, etc) and six found on "State." In third place, "Washington."
9. There are 12 capitol buildings without a dome (A few of those have cupolas.)
10. The Minnesota State Capitol has the 2nd largest self-supporting marble dome in the world.
11. There are 10 gilded domes and 9 copper clad domes. There are 7 made of stone.
12. The Capitol of South Carolina, which had seceded from the US, was burned by the Yankees under the direction of General Sherman.
13. The 1870 tragedy took place in Virginia.
14. Goebel was the governor of Kentucky for four days in 1900 before he died from a gunshot wound.
15. There are 19 capitol buildings designated as a National Historic Landmark. 42 of the capitols are listed on the National Register of Historic Places. (Obviously, some capitols are both a NHL and on the NRHP.)
----
Bonus: The four capitols pictured in the top row of the graphic are Baton Rouge (Louisiana) and Atlanta (Georgia). The bottom row is Sacramento (California) and Nashville (Tennessee). Thanks for sharing!
-------
I had a lot of fun researching this trivia. If you would like to learn more, I recommend the following sites. I've added my guide to visiting state capitols to the list as well.
Have you visited any state capitols? Let me know in the comments!
Email ThisBlogThis!Share to TwitterShare to FacebookShare to Pinterest
Labels: trivia, US Travel