Beloved in the Windy City, a proper Chicago dog starts with an all-beef frank in a poppyseed bun. It is topped with yellow mustard, chopped white onions, neon green pickle relish, tomato slices, a dill pickle spear, pickled sport peppers, and a dash of celery salt. It looks like this: 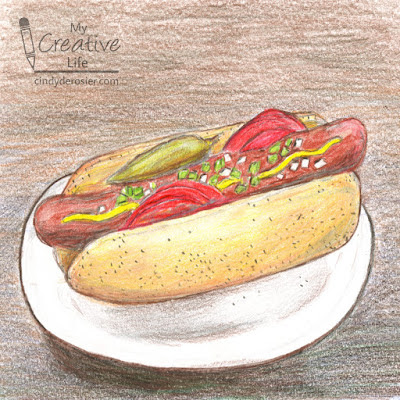 How to Draw a Chicago Dog
Imagine my surprise when I opened a press release from the Museum of Ice Cream (which is not actually a museum, but rather an "Instagram-ready art attraction") and saw they were promoting their new Chicago Ice Cream Dog: 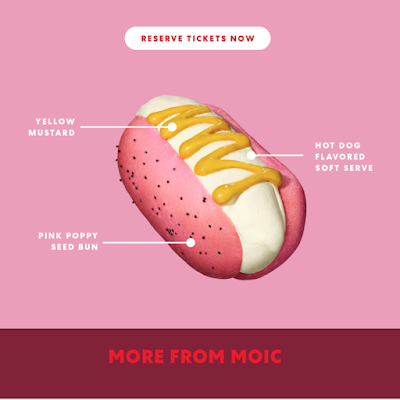 I'm all about trying new-to-me foods, but this is ridiculous. "Hot dog flavored" and "soft serve" do not belong in the same sentence. Yellow mustard on ice cream? I seriously checked the date on the email to confirm that it wasn't some sort of April Fool's prank two months late. It seems to be legit, but I'm holding out hope that it is not.
Aside from the taste, which I can only assume is awful, it doesn't look much like a Chicago dog. There's mustard, sure. (Why is there mustard on ice cream?!?!) But it's missing everything else that defines Chicago's beloved food. The ice cream isn't even shaped like a hot dog.
I'm a huge fan of food that looks like one thing, but is actually something else. So while ice cream flavored like a hot dog and topped with mustard does not appeal to me in the slightest, pale chocolate ice cream shaped like a hot dog and topped with a thick mango puree sounds delightful. Put it in a bun made from pound cake or a sliced donut. Pile on some chopped green jello bits as relish, add slices of strawberry cut to look like tomatoes, and sprinkle on some marshmallow bits to mimic the onion. Delicious! And a lot of fun to try and make.
I was all set to construct my ice cream version of a Chicago dog, but decided to do a quick Google search to make sure I wasn't reinventing the wheel. Sure enough, HellthyJunkFood and the Greenery Creamery beat me to it.
Their version differs from my (as-of-yet theoretical) version. The way they did the hot dog is genius, and the brioche and the buttercream are great choices. Of course, theirs isn't a Chicago dog, since they added (faux) ketchup. I can be easily convinced to try making my Chicago-style version if you think the world needs it. Thoughts?
Email ThisBlogThis!Share to TwitterShare to FacebookShare to Pinterest
Labels: edible, hot dog, ice cream