As I've mentioned before, we always have two parties for Trevor's birthday- an outdoor BBQ for family, then a separate party for his friends.  Today I'll tell you about the family party.

I'd planned for Trevor's party to be a backyard BBQ, as we have done for all his birthdays in the past.  It's usually gorgeous here in early June- bright and sunny, with temperatures in the low 80s.  Unfortunately, this year it was raining on the day of the BBQ, so we had to move the party indoors.

We decorated the house with homemade lions, pandas, monkeys, and giraffes.  I made a banner using animal alphabet letters that I found at Goodnight Stories.

As soon as the guests arrived, I had the kids use zoo stamps and stickers to decorate plain white treat bags. 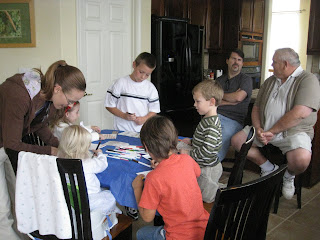 Then we played a rousing game of Pin the Banana on the Monkey. 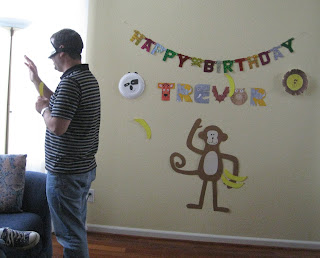 (Steve was not the only one who veered significantly to the left.)

Next, we did a word search that had a hidden message inside. 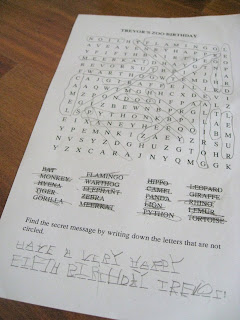 I made a small error when I created the word search.  From now on, "elephany" is a valid word in family Scrabble games. 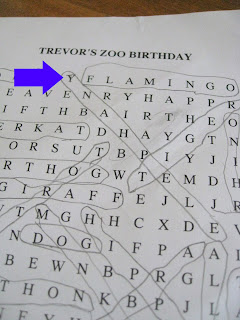 Next, we played Zoo Animal Memory.  I revealed 20 stuffed animals and gave everyone two minutes to memorize them.  Then I covered them up and everyone had to write down which ones they remembered.  We ended up with a three-way tie for first place! 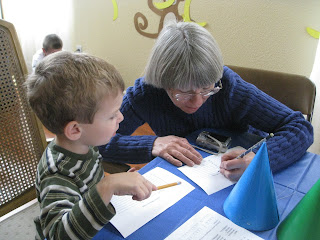 Next, the kids made Zoo Animal Shrinky Dinks.  I printed out some zoo animal shapes, which the kids traced onto shrink plastic.  They colored in their designs, cut them out, and punched a hole.  Everyone gathered around the oven to watch the magic!  I didn't get any pictures of them making the Shrinky Dinks or the finished product, but they turned out well.

Here are Trevor and Kylinn, ready for dinner.  Check out the monkey behind them.  Five people erred to the left, but no one erred to the right.  I wonder why?! 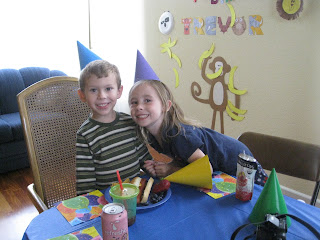 After dinner, it was time to break the Zebra Pinata.  I'd planned to do this outdoors, but because of the rain we ended up in the garage. 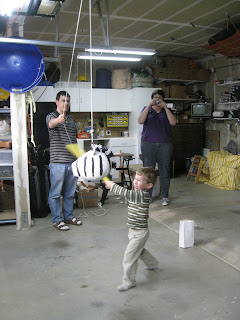 While the kids were breaking the pinata, a few adults stayed inside to hide candy and presents for our traditional candy hunt. 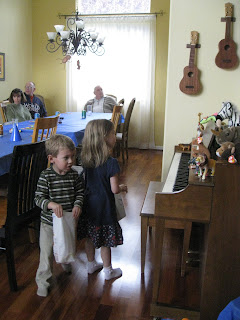 Each child got a box of animal crackers and a make-your-own-bug fruit snack pack, in addition to whatever candy they found. 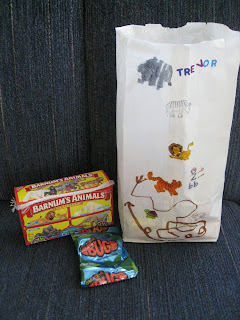 Finally, we all enjoyed some giraffe cake. 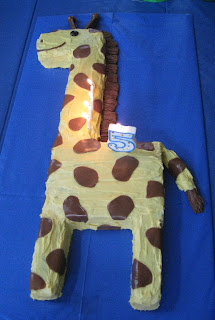 I had a great time planning the Zoo Party!  It was a really easy theme (in contrast to the Maze Party!) and it turned out really well.  Trevor was thrilled with everything about his party.

Posted by Cindy deRosier at 5:00 AM
Email ThisBlogThis!Share to TwitterShare to FacebookShare to Pinterest
Labels: Parties