I love all things lemon.  I've mentioned before that my parents have a prolific lemon tree (here's a recipe for delicious lemon sorbet), so they're regularly giving us big bags of lemons. I usually freeze both the juice and the zest.  This time, I used the vegetable peeler to remove the zest in big strips before juicing the lemons.

I cleaned a mason jar, then added the strips of lemon zest and some cheap vodka.  I covered the top with plastic wrap and let it sit. 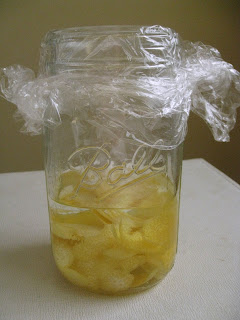 After five days, the vodka had taken on a yellowish tinge. 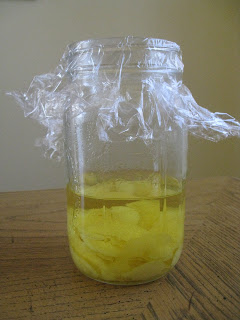 I strained out the zest, then made a simple syrup (equal parts water and sugar).  I added the simple syrup to the lemon-infused vodka, then let that sit for a day.  (Exact measurements aren't necessary, but if you want to follow a recipe, try this one.)  Store the limoncello in the freezer.

I brought my homemade limoncello to our Labor Day get-together, where the adults sipped it while playing Apples to Apples (one of my favorite games, by the way).  Delicious! 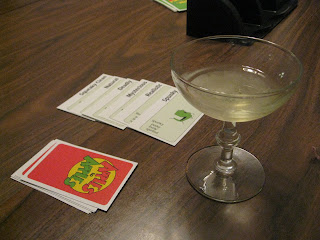 By random coincidence, we were given a bottle of limoncello two days later!  Steve was gone on a business trip, so I waited until he got home, and poured a side-by-side tasting of my homemade limoncello and the commercial one. 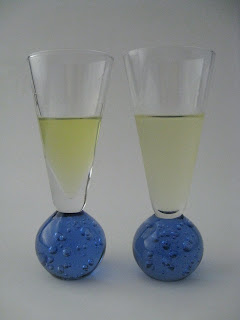 (Commercial on the left; mine on the right)

Yet another case where homemade is better!
Email ThisBlogThis!Share to TwitterShare to FacebookShare to Pinterest
Labels: Recipes