We love Food Network's Cupcake Wars.  (If you missed it, our family did a Cupcake Wars champions taste-test back in May.)  For those who haven't seen the show, four cupcake bakers compete each week to bake tasty and beautiful cupcakes that fit a theme.  After each round, one baker is eliminated.  In the final round, the two remaining bakers build a 1000-cupcake display using the cupcake recipes they created during the previous rounds.

Ever since our family's Chopped challenge, Trevor has been asking when we can do a family version of Cupcake Wars.  I liked the idea so much, I added it to my list of 40 Things.  Here are the cupcakes that each of us made for the competition. 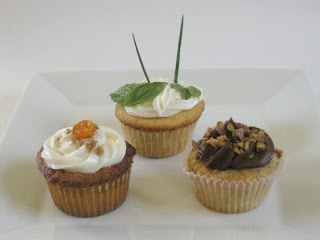 But let's start at the beginning.  On the day of our Cupcake War, Trevor and I went through our garden and pantry and selected twelve food items, which we wrote on index cards.  We used painter's tape to make a grid on our rug, then put each food item into each box.  Some ingredients are standard cupcake flavors: lemon, chocolate or peanut butter.  Others are not usually found in cupcakes, like tomatoes, cheese or chives. 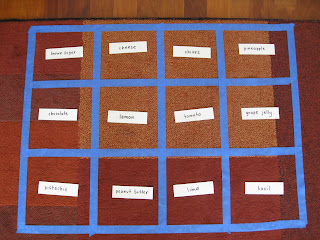 We chose two stuffed jellyfish, which we used as beanbags. 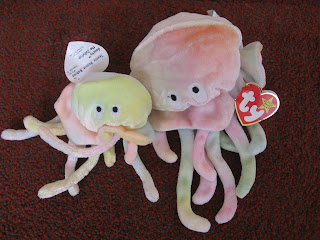 One at a time, we each threw a jellyfish into the grid.  Wherever it landed was what ingredient we had to use in our cupcake. 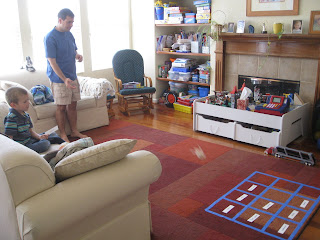 My first toss landed in chocolate.  Wow!  That was lucky!  I was really afraid of getting chives, so I aimed for the opposite side of the grid.  Pistachio.  OK, that's promising.... 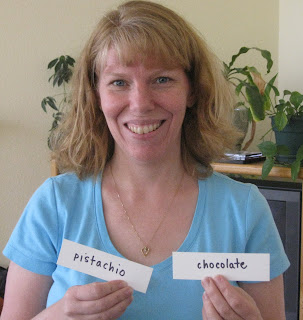 Trevor got lemon on his first toss.  So cool!  Practically everything goes with lemon, right? Well, maybe peanut butter and lemon isn't exactly the first combination that comes to mind. (I caught him mid-grimace in this picture!) 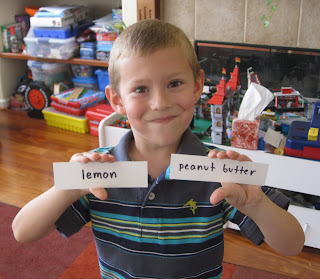 Steve's first toss landed in brown sugar.  Another excellent item!  His second toss took a bit of a bounce and landed in tomato.  This was hilarious.  Not only is it a strange combination, but Steve hates tomatoes.  Nevertheless, he was a very good sport about it. 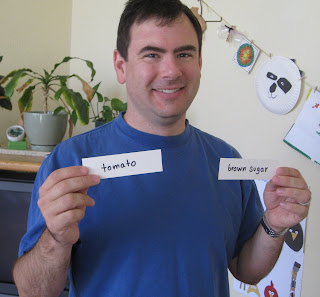 Each of us took some time to think about our plans before the baking began.  Steve got out the cookbooks and started searching under T for tomato.  Trevor got out his notebook and drew a picture of a vanilla cupcake with peanut butter filling and lemon frosting with chives and basil sticking out of the top.  I started shelling pistachios.  Once we all had our plans, we reconvened.

While Trevor frequently helps me bake, at age 6 he is certainly not able to make cake from scratch independently.  At 36, it's not something Steve has ever attempted.  So I made a basic vanilla cake batter for all of us.  Then I divided it into thirds. 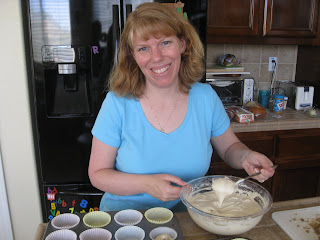 Trevor left his cake batter plain (vanilla). I folded chopped pistachios into mine. Steve swirled brown sugar into his. 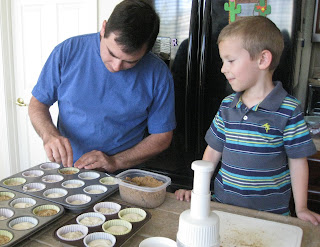 
I taught Trevor how to core his cupcakes and helped him fill them with the peanut butter mixture. 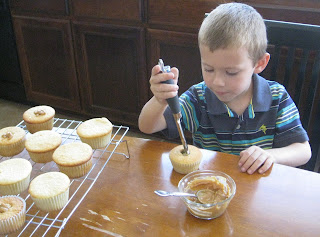 Meanwhile, Steve brought a simple syrup to a boil and threw in chopped yellow tomatoes.  He let this cook down to a syrup, which he spooned into his cored cupcakes. 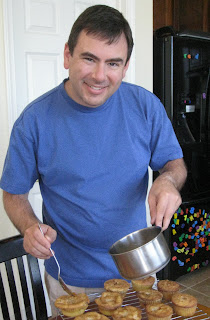 I decided against filling mine.  I wanted the cake to have a definite pistachio flavor and I was worried a filling would detract from that.  In retrospect, I should have filled mine to make them more interesting, since I knew both my competitors had used a filling.  Oh well!

Neither Steve nor Trevor know how to make buttercream either, so I made a big batch for all of us.  As before, I divided it into thirds.  I taught Trevor how to zest lemons, then helped him add lemon juice and zest to the base frosting.  When it was the right flavor and consistency, I put it in a piping bag for him and let him frost. 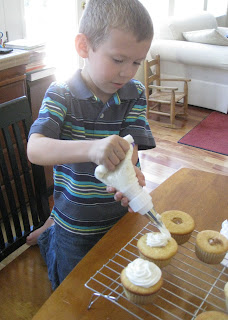 Steve did not do anything to his third of the buttercream.  Instead, he focused his attention on a garnish: bruleed tomato halves. 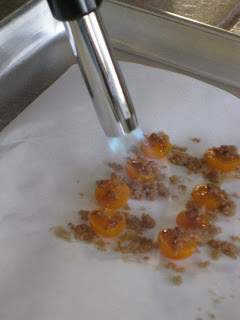 I made a chocolate frosting.  After piping it on, I added chopped pistachios on top.  Then I dipped pistachios in melted chocolate and sprinkled them with sea salt.  I ended up deciding against adding my chocolate covered pistachios to the cupcake, since I thought it looked beautiful as it was. Again, in retrospect, my cupcake was just too simple.

At this point, Trevor reminded us that any ingredient still in the grid was up for grabs.  He raced into the backyard and returned with basil and chives.  I thought he was crazy adding two of the most challenging ingredients to his practically-done cupcake, but he insisted.

Finally, it was time for judging.  Each of us made a presentation to the others about our cupcake.  Trevor made a vanilla cupcake with peanut butter filling and a lemon frosting, garnished with basil and chives. 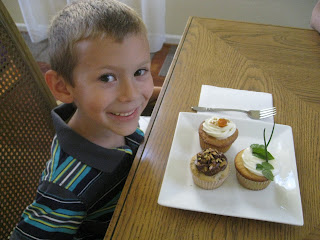 Steve made a brown sugar cupcake with a tomato compote filling, frosted with buttercream, and garnished with a bruleed tomato half. 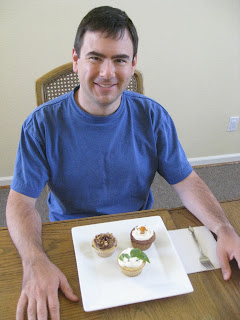 I made a pistachio cupcake with chocolate frosting, garnished with chopped pistachios. 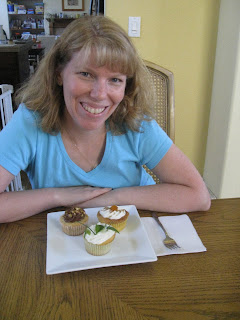 We each ranked the cupcakes from 1st to 3rd place.  Trevor was worried that everyone would vote for their own, but that isn't what happened at all.  In fact, none of us thought our own cupcake was the best!

Even though we had a clear winner, we wanted some impartial judges to confirm our results. Our neighbors agreed to judge.  We were careful not to let them know who made each cupcake.  I totaled the points from the three of us and our four other judges.  Drumroll please!

Coming in third.... my chocolate pistachio cupcake!  Only 1 person out of 7 voted it as the best.  I got a handful of 2nd place rankings, but it wasn't even close.  My frosting was really good (and I have the best piping skills), but all those pistachios made the cake a bit dry.  A filling would have helped.  Plus it would have made the cupcake more interesting or unique. 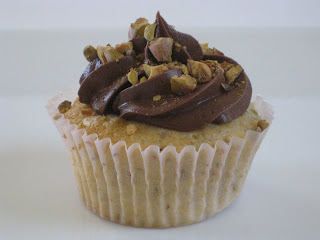 Coming in second... Trevor's peanut butter and lemon cupcake!  I thought the chives and basil would be a huge mistake, but they actually went better with the lemon and vanilla than the peanut butter did.  His lemon frosting was delicious and his cake was moist. 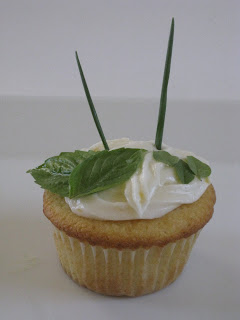 And the winner... Steve's brown sugar and tomato cupcake!  I never would have guessed that the weirdest combination, made by someone who hates one of the ingredients, would be so tasty!  Four out of seven judges awarded it first place.  The cake was really good, with a deep brown sugar taste.  The compote was odd but delicious.  The garnish was really good. The only mistake was with the frosting, as it didn't taste like anything but powdered sugar, leading to an overly sweet cupcake. 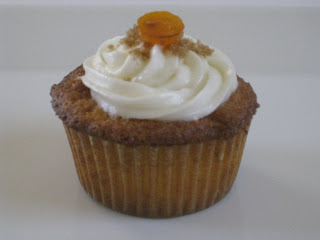 So congratulations to Steve, champion of the deRosier Cupcake Wars!  Now that he's a champion, he'll have to bake his own cake and make his own buttercream the next time we compete.  Seems only fair, doesn't it?