When I picked Trevor up from school the other day, I asked him what he wanted for dinner. He thought about it for a minute or two, then answered: a snake sandwich. Huh? Apparently one of his kids' cookbooks has an explanation of how to make a sandwich that looks like a snake. Snake isn't one of the ingredients, fortunately.

He raced into the backyard to harvest some tomatoes and basil, then zipped over to the fridge to check out what else we had. He set me to work cutting bread into rectangles and slicing tomatoes. He started making sandwiches and arranging them on a tray.  Here's what our dinner looked like: 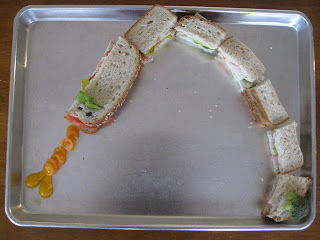 (A pear-tomato tongue, raisin eyes, and pea pod eyebrows. That broccoli piece at the end is a rattle.) 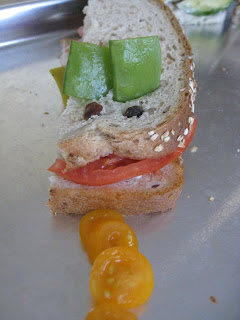 An unconventional dinner for sure, but tasty. Except for the raisin eyes. I hate raisins, yet Trevor insisted that I get to eat the head.

The next night, I decided to tackle one of the few remaining cooking items on my list of 40 Things: popovers. It's strange that I'd never made them before. They're really easy and I love how they taste. But somehow I never actually made them until now. It was really fun watching them pop and they were absolutely delicious still hot from the oven. I'll definitely be making these again. Goal #28 accomplished! 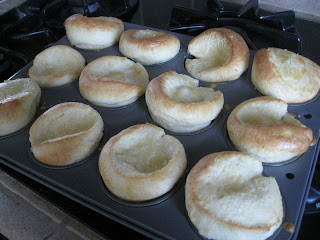 We invited Trevor's godparents to join us at my inlaws' cabin in Bear Valley over Labor Day Weekend.  I wasn't sure if the weather would be cold enough to light the wood stove (it wasn't), so I decided to make some s'mores bars to bring along instead of planning to make actual s'mores. We had some leftover Golden Grahams from Trevor's school birthday treat, so I started with this recipe from Betty Crocker. I ended up adapting the recipe quite a bit, as I always do. Here's my version: 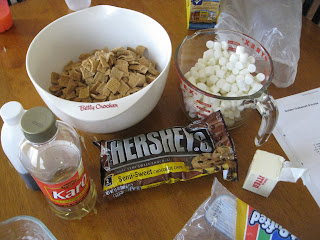 Melt 3 c. marshmallows, chocolate chips, butter and corn syrup in the microwave. Add the vanilla, then mix in the cereal. Let it sit for a minute or so, then stir in last cup of marshmallows. Spread the mix in a 13" x 9" buttered dish. Let the s'mores set in the refrigerator, then cut into squares. 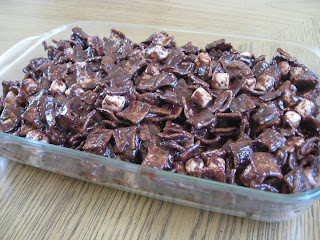 I let the s'mores set in the refrigerator, then turned the whole thing out onto plastic wrap and wrapped it tightly for transport. I popped them in the refrigerator when we got to the cabin, then sliced them into bars when it was time for dessert. Absolutely delicious! I've already added Golden Grahams back to our grocery list.
Posted by Cindy deRosier at 5:00 AM