We make our own fun here in the deRosier household by turning ordinary activities, like making dinner, into something totally out-of-the-ordinary.  After watching both Steve and me have our turns at cooking from a Chopped basket, Trevor desperately wanted his own turn.

Steve and I went to the store to select ingredients.  It was MUCH harder picking ingredients for Trevor than it was for Steve.  We wanted ingredients that Trevor not only would recognize but would know how to prepare.  We wanted items without major food safety issues so there wouldn't be any concerns about cross-contamination or inadequate cooking time.  We wanted things that Trevor could prepare with minimal help, so nothing that would be challenging to cut or open.  Finally, we wanted items that wouldn't be completely revolting if Trevor just dumped all four of them together. 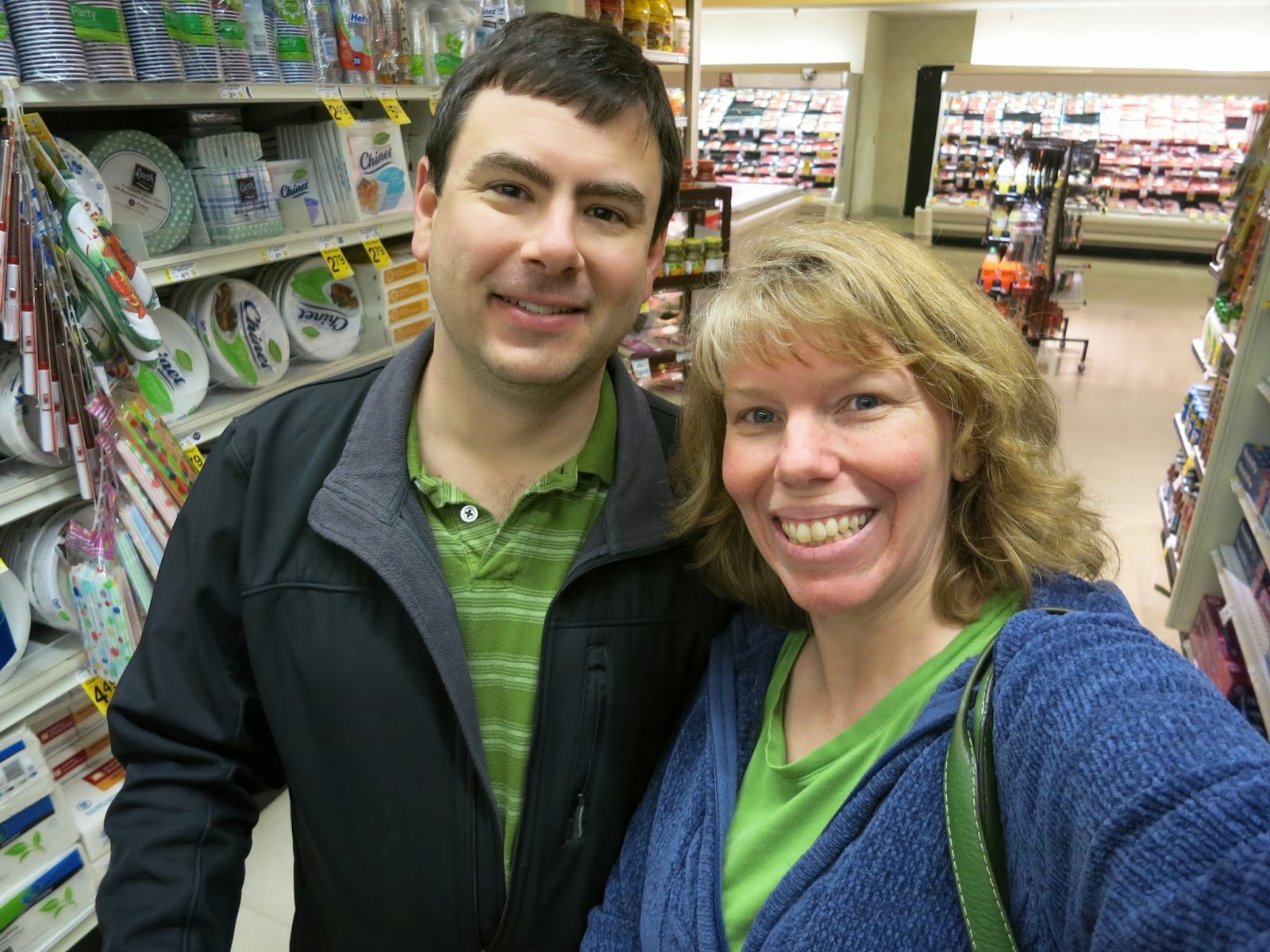 After much debate, we settled on these: English muffins, zucchini, garbanzo beans, and eggs. 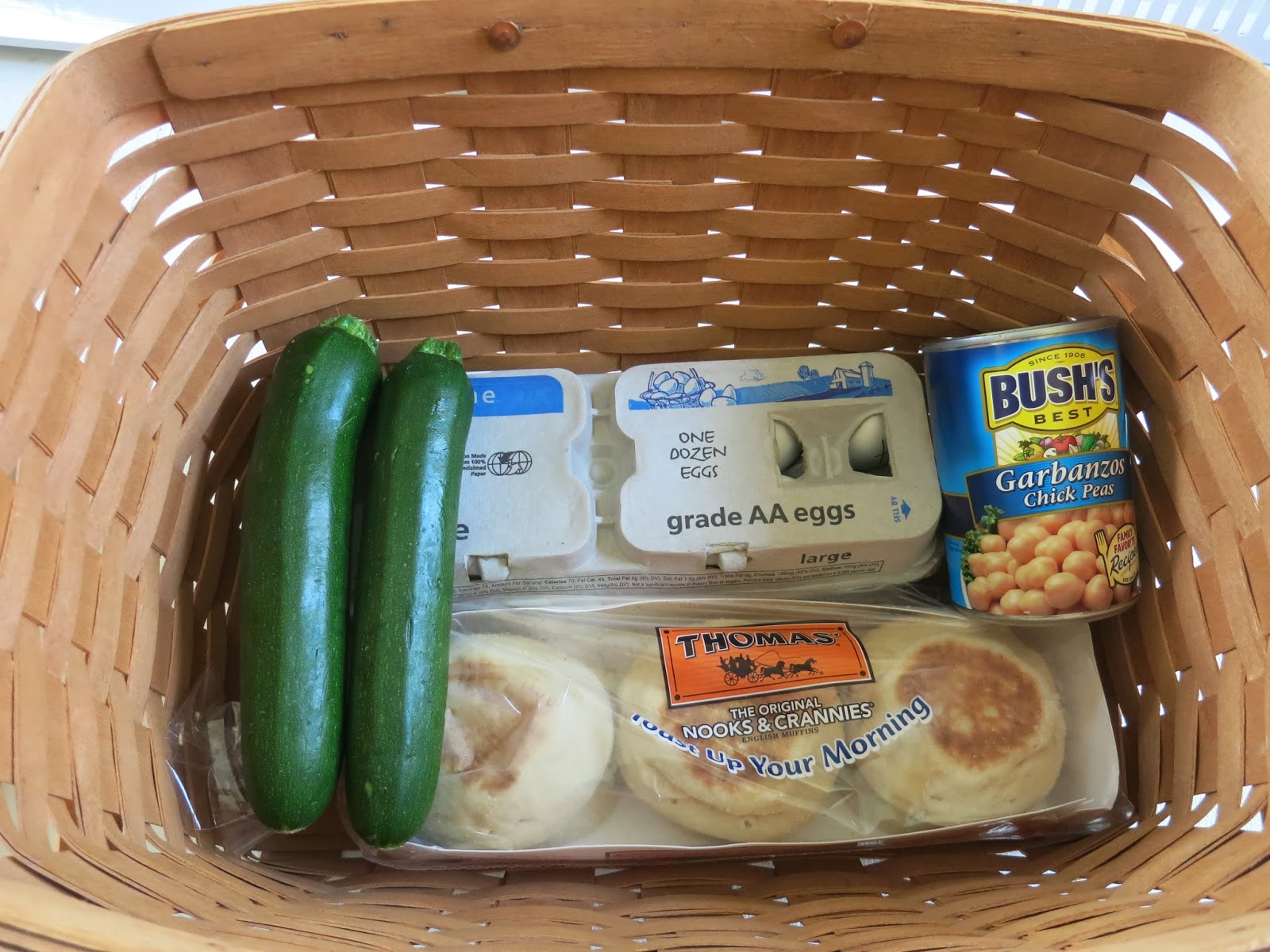 When Trevor opened the basket, he smiled at the sight of the familiar ingredients... 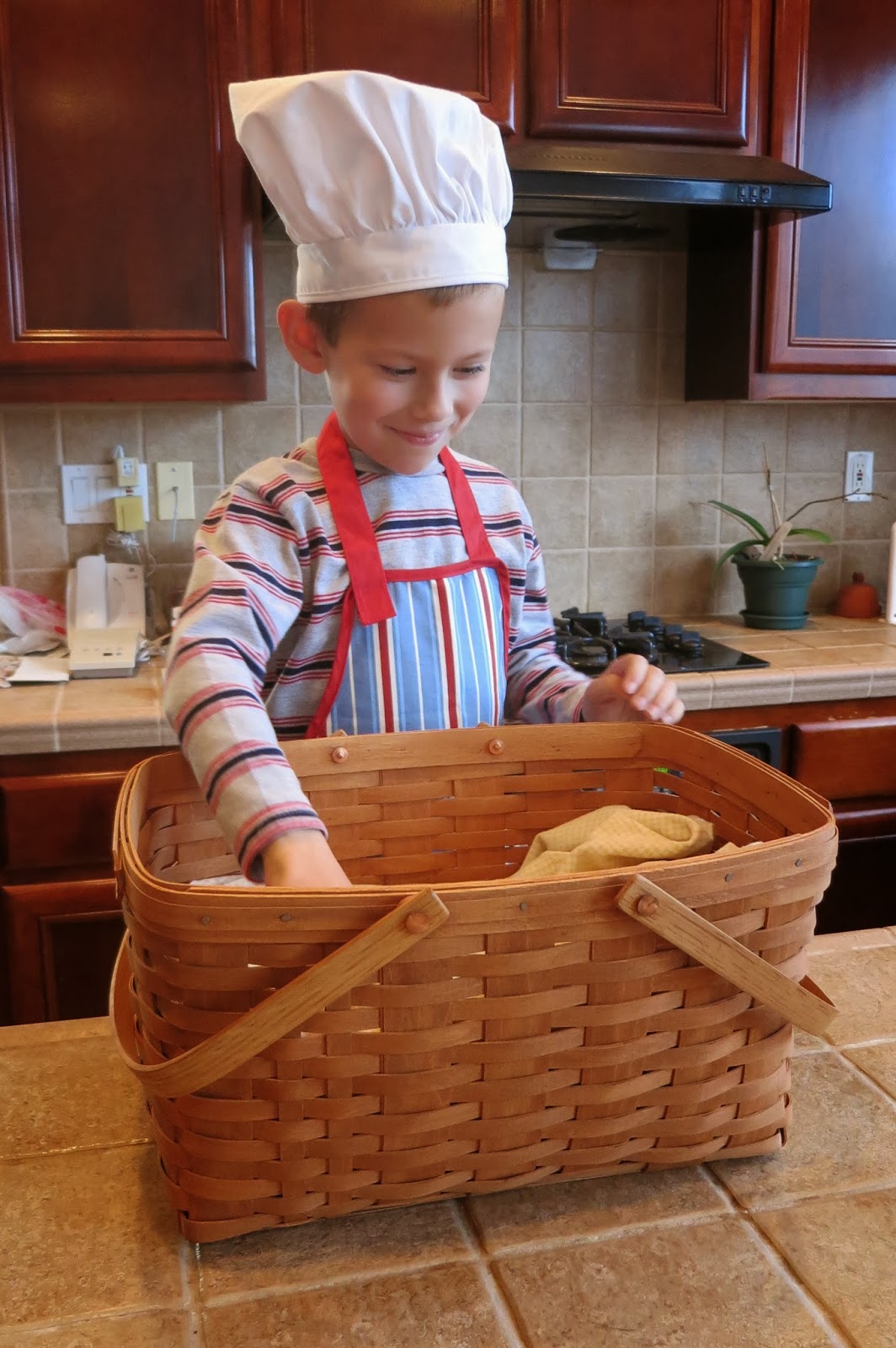 ... then laughed about the garbanzo beans.  When he was a toddler, Trevor loved garbanzo beans so much that we bought them at Costco because he would go through a can every day or two.  He called them bonzos and he liked to eat handfuls of them mixed with peas and blueberries on the tray of his high chair. 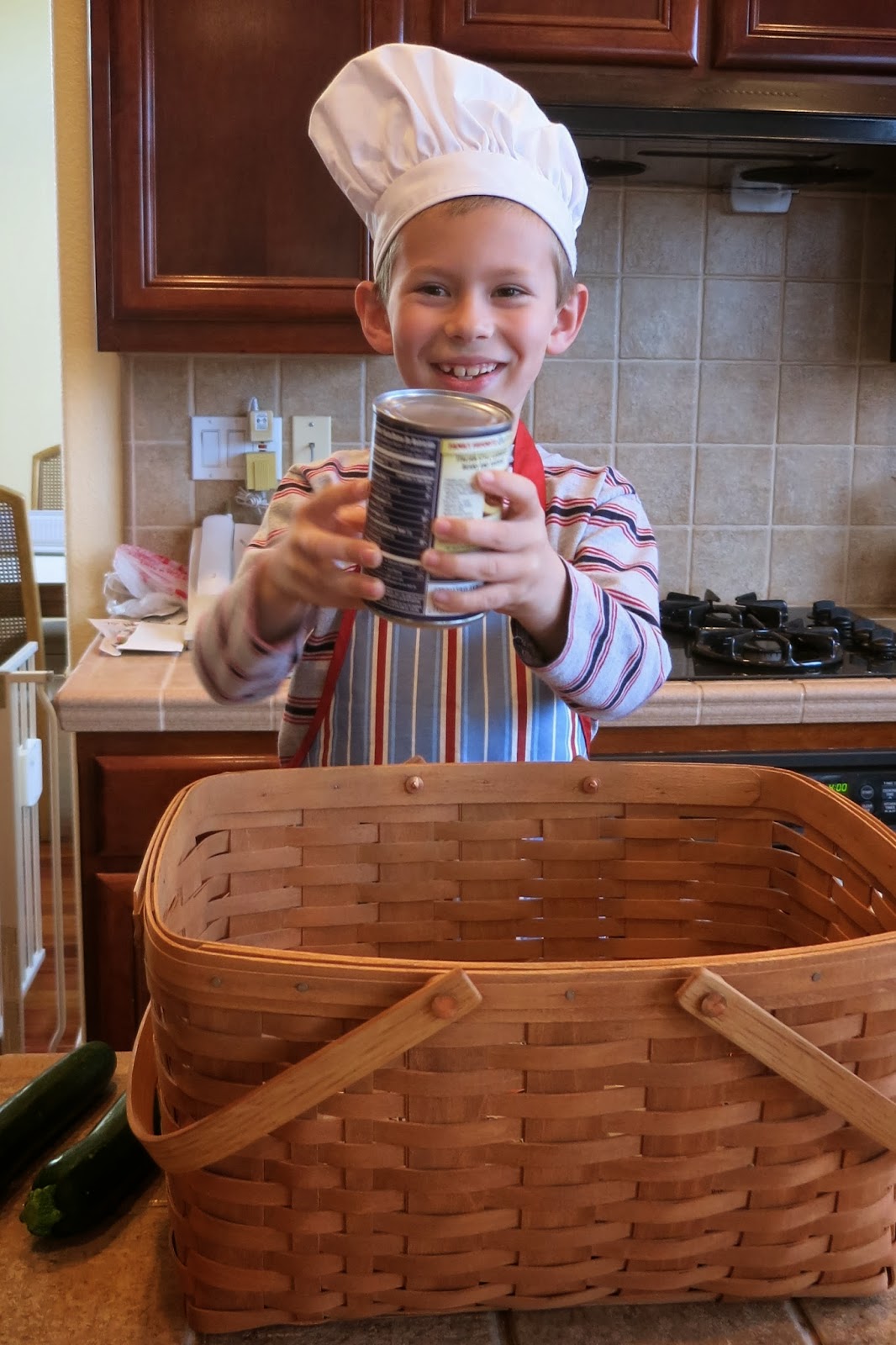 After looking at the four ingredients, Trevor announced that he knew exactly what he would do. He started by cutting the zucchini. 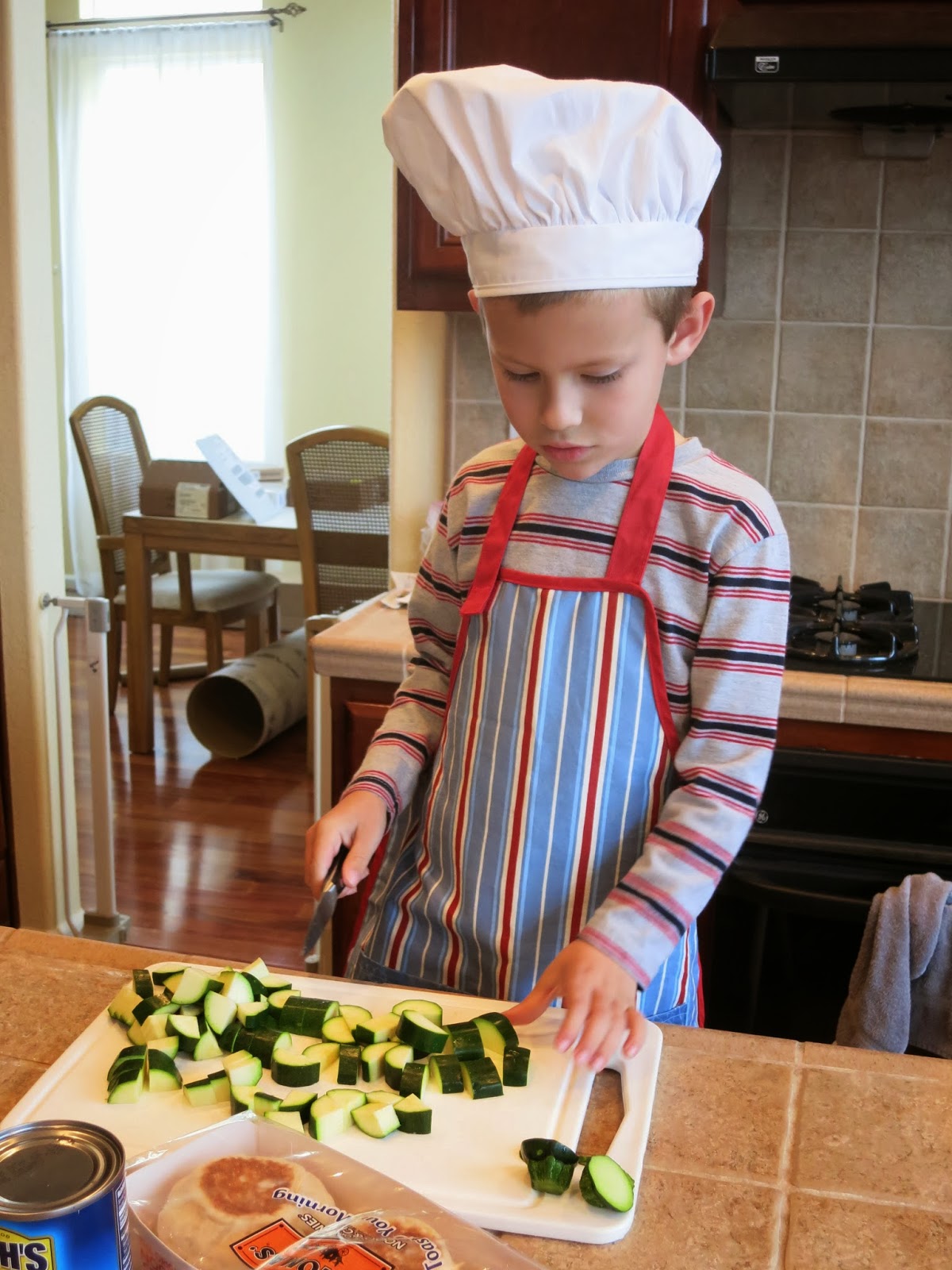 Then he asked me to cut some carrots for him.  He was going to make a soup.  With a bit of prompting, he sauteed the carrots and zucchini in butter, then added vegetable broth.  He turned down the heat to let it simmer.  He drained the garbanzo beans and set them aside to add to the soup. 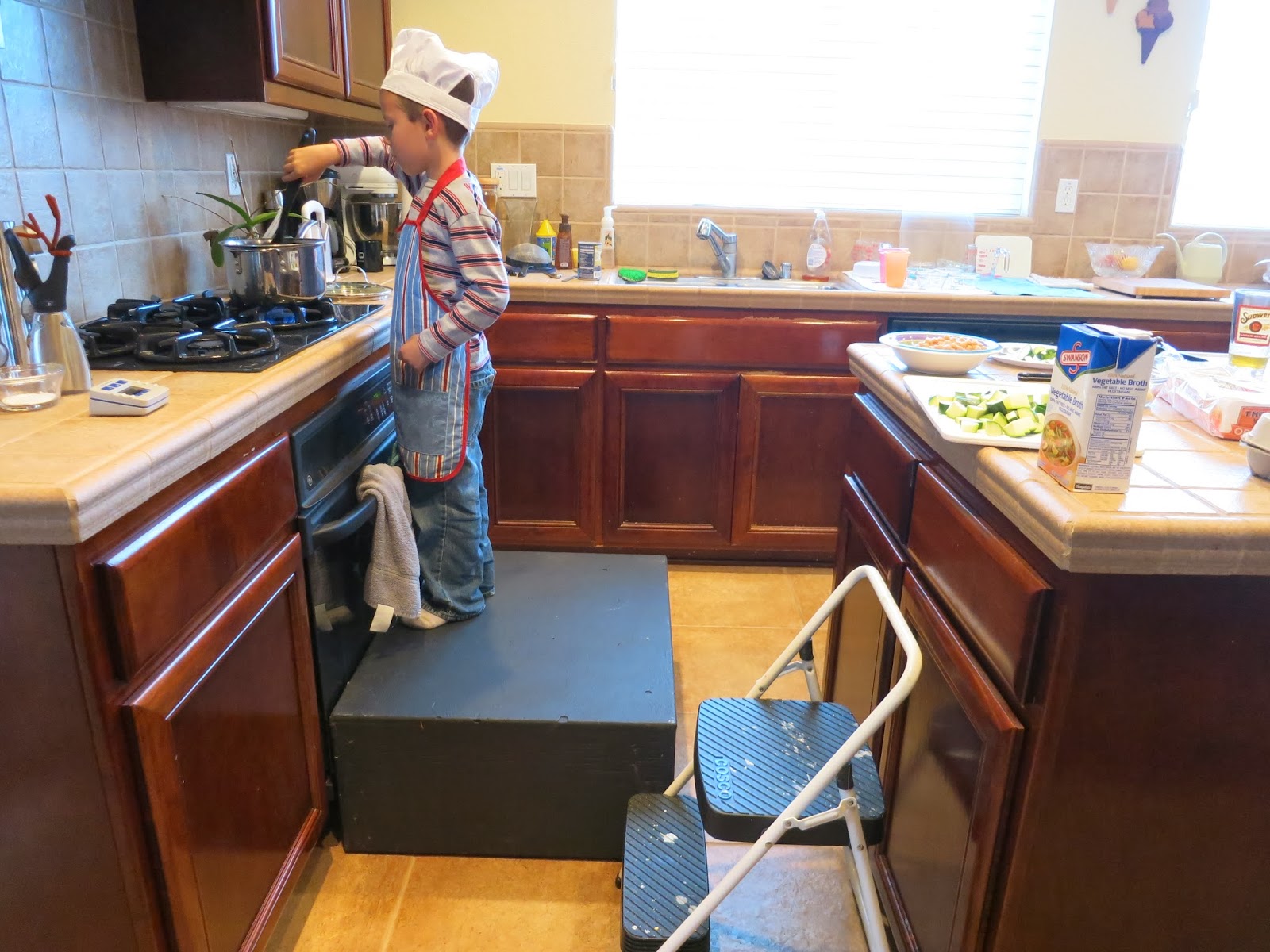 He turned his attention to the eggs.  I'd included hard-boiled eggs amongst the raw so that he would have options (without having to spend 30 minutes making and cooling hard-boiled eggs). He peeled a hard-boiled egg, cut it into chunks, and set it aside.  Then he went to the pantry and put six tortilla chips on each person's plate.  He sprinkled grated cheese on top, then slid half an English muffin underneath the chips.  He refused to tell us what his plan was.  I was confused, to say the least. 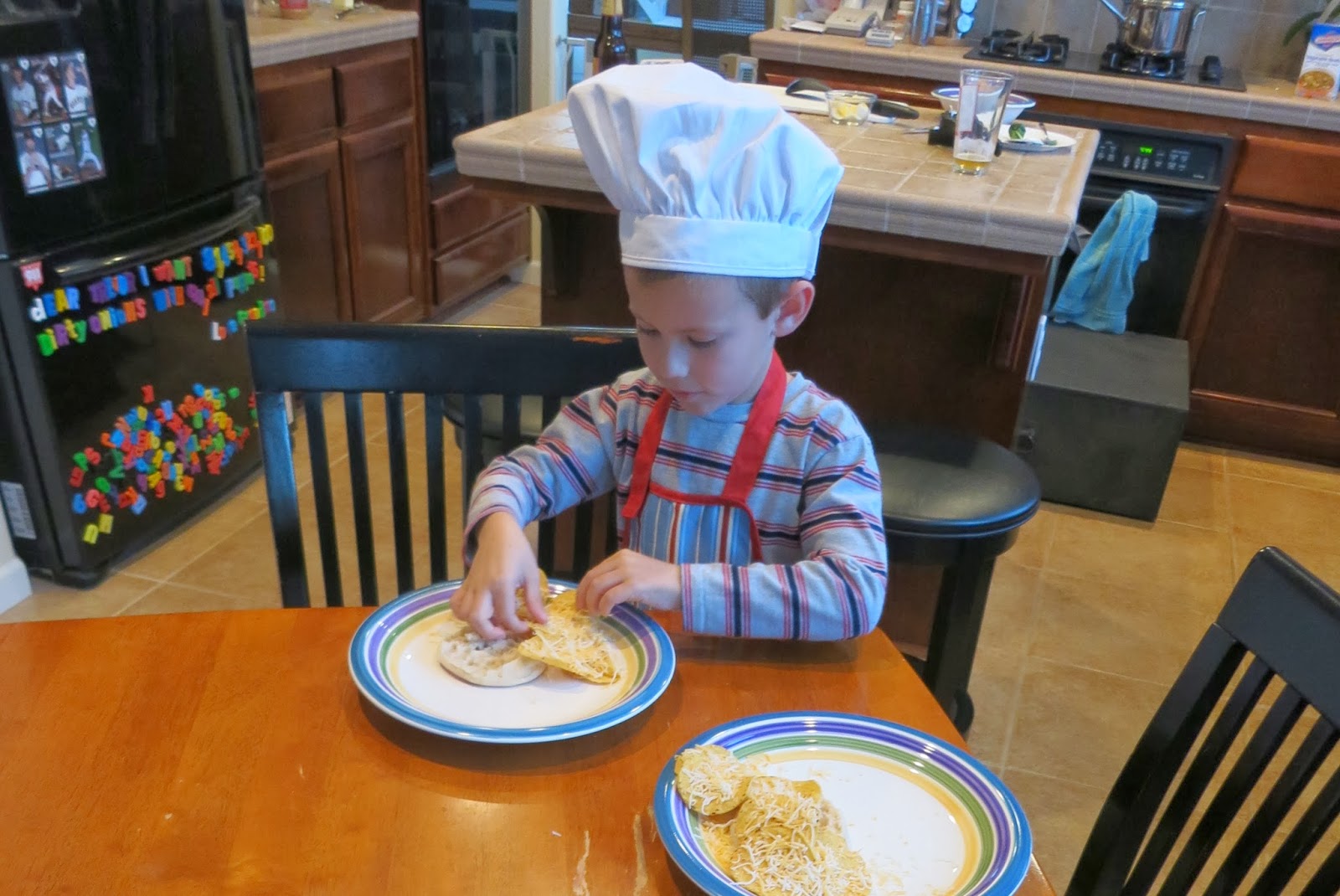 He returned to the soup, added the garbanzo beans, and tasted the soup.  He added some pepper, garlic powder, onion powder, and grated nutmeg, tasting between each, and declared it perfect. 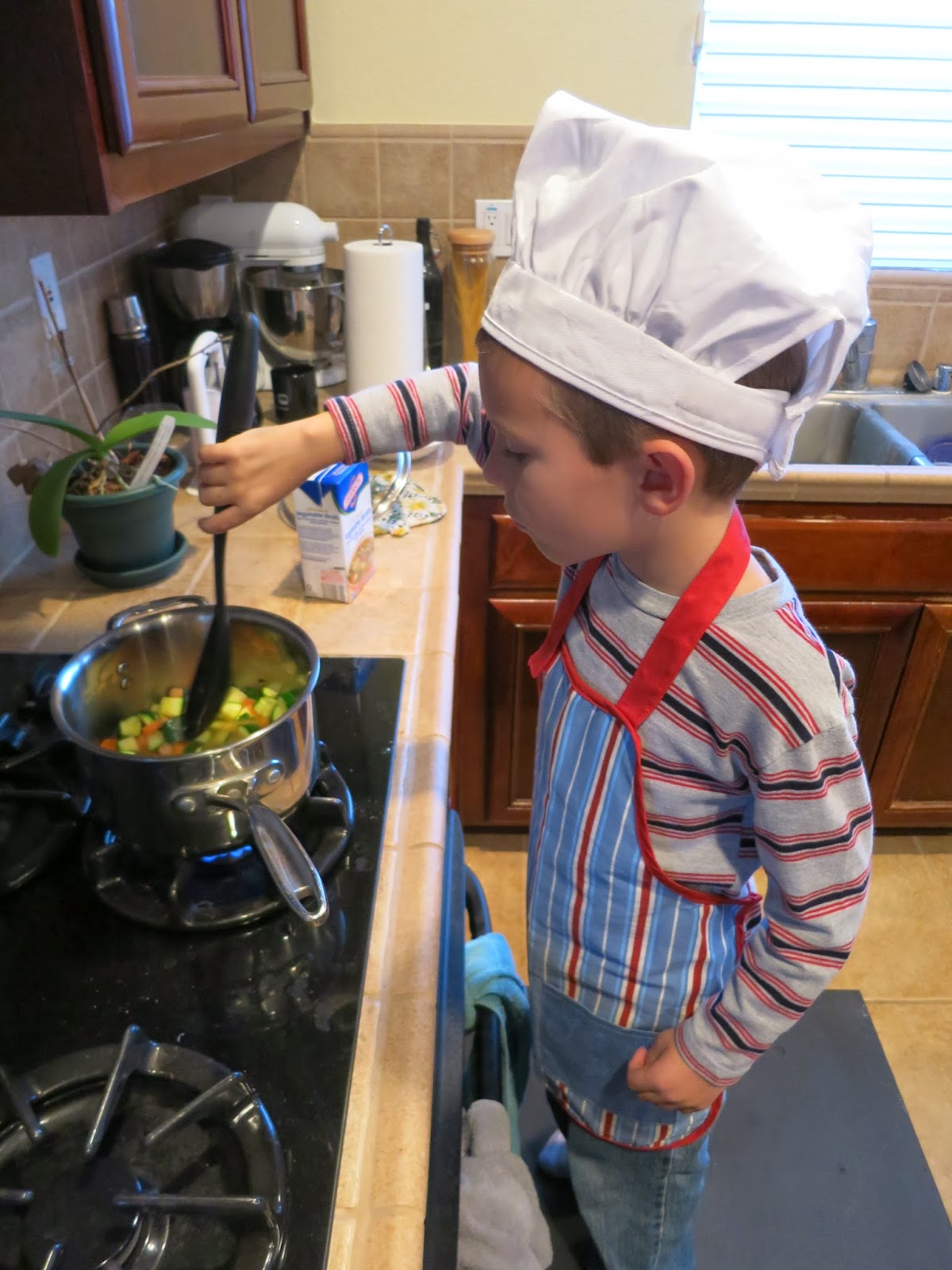 He asked me to put each plate in the microwave to melt the cheese.  He added chunks of hard-boiled egg on top of the melted cheese. 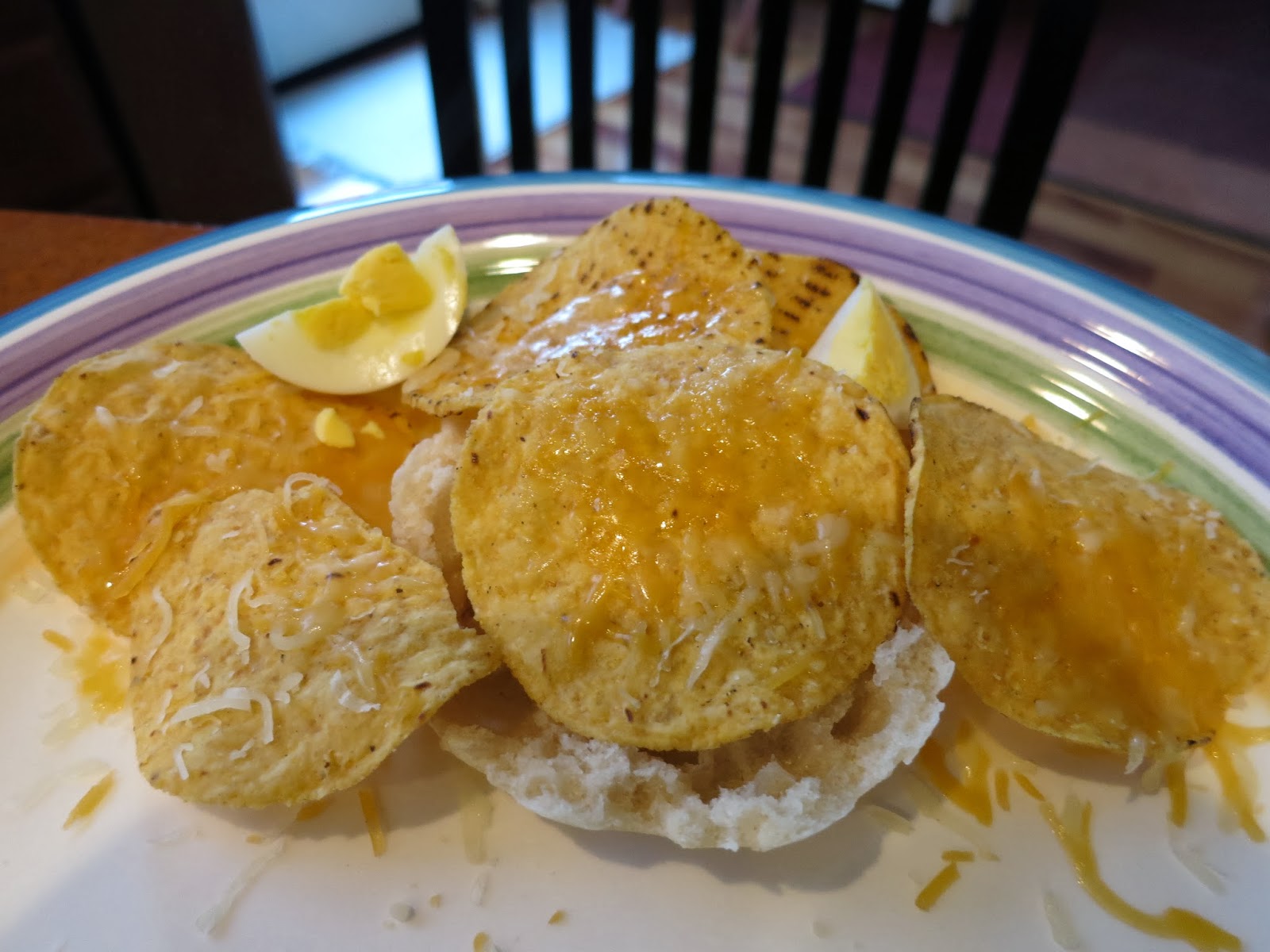 He ladled the soup into bowls and presented his meal: a nacho plate with English muffin and hard-boiled eggs, and a soup of zucchini, carrots, and garbanzos. 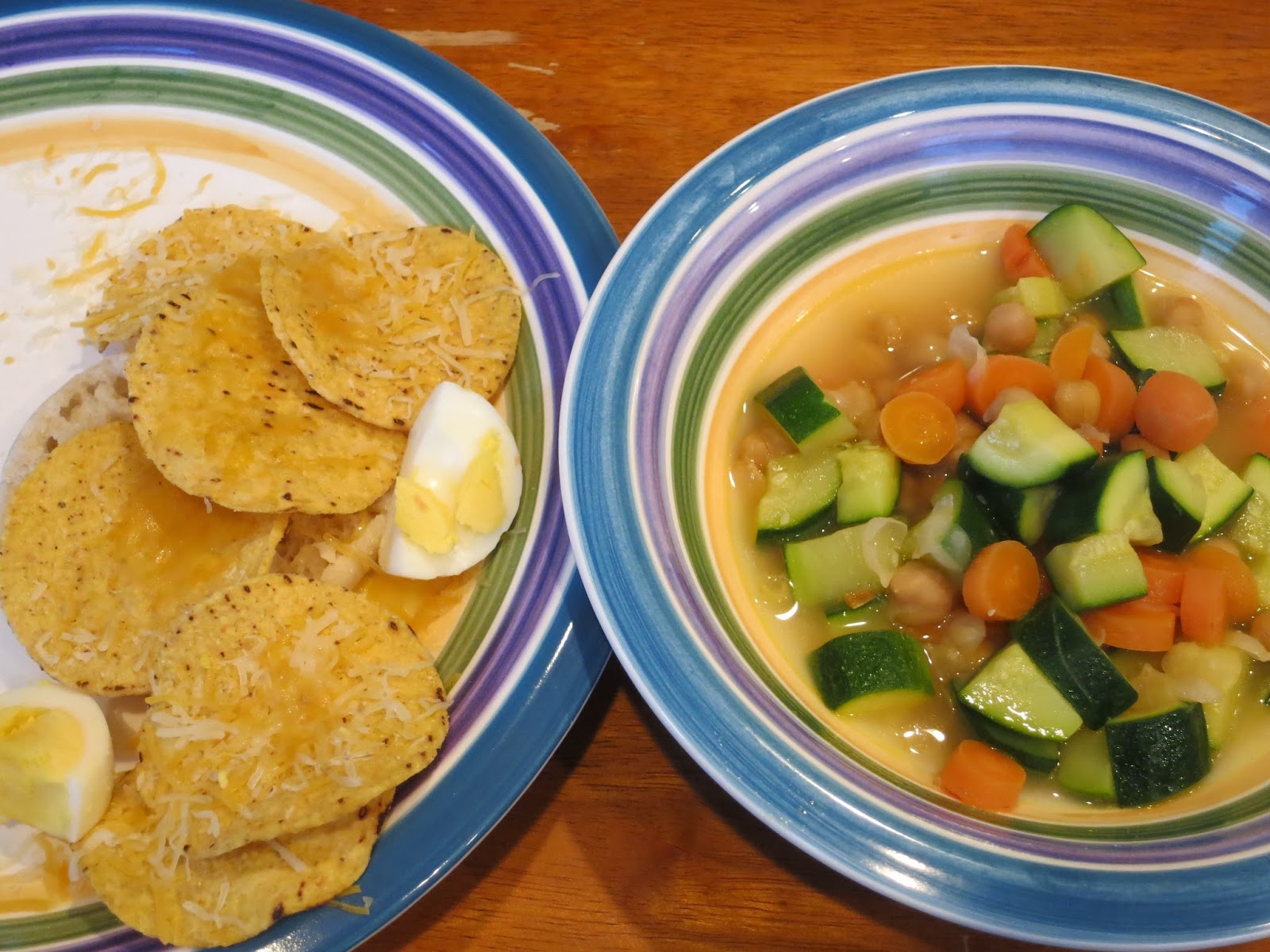 Time to dig in!  First, Trevor demonstrated how to eat the nachos.  Tear off a chunk of English muffin and put it on top of a chip, making sure there is hard-boiled egg on it.  Then enjoy! 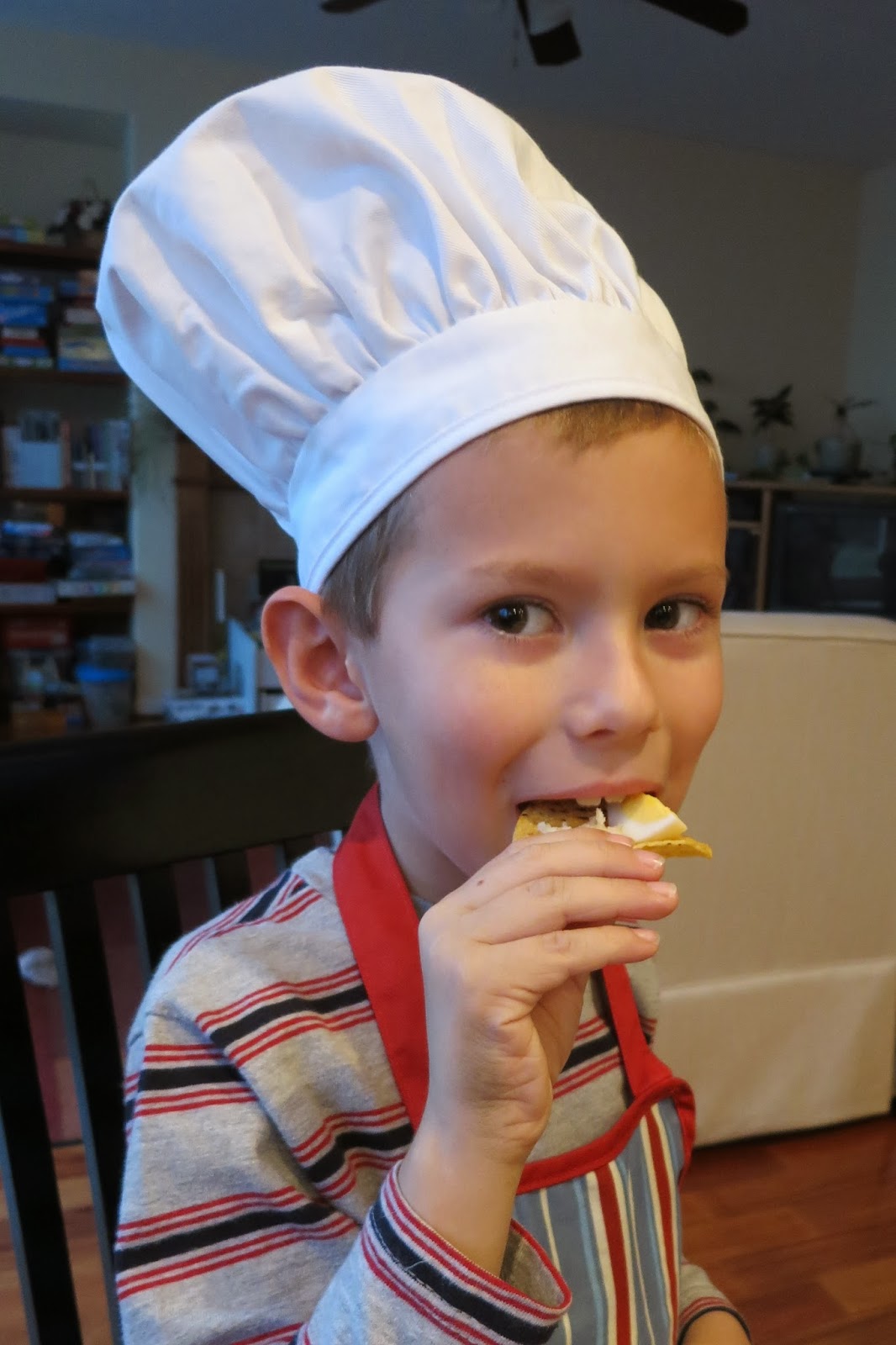 We started with the soup.  It was absolutely delicious.  Seriously- you'd never know it was made by a 7-year old with minimal cooking experience.  The broth was excellent and the veggies were cooked perfectly.  I hope he makes it again soon.

The nacho plate... well, the judges were kind but critical.  Sliding an English muffin under nachos didn't transform the ingredient.  It made no sense that the diner had to pull a chunk of English muffin apart before eating.  It would have been better for Trevor to serve it already cut. The hard-boiled eggs weren't cut small enough to go on every nacho.  They actually tasted just fine on the cheesy chips, but it was a bit hard to eat and definitely confusing.

Overall, Trevor did a great job with his first Chopped challenge.  He was extremely proud of himself and is excited to try again.

When we cleaned up, I noticed that there was enough of each ingredient left over that I could cook dinner with them the following night.  Tomorrow I'll share with you what I made with the same four ingredients.

Soon after I finished writing this post, we got some very exciting news: Trevor was selected again as part of the Be the Change Student Summit!  (See this post from two weeks ago for more information.)  He's told some people already and gave me the go-ahead to share here.  Congrats to Trevor!  We're so proud.
Email ThisBlogThis!Share to TwitterShare to FacebookShare to Pinterest
Labels: Cooking Competition