Last November, when my childhood best friend Nancy and her kids were visiting from Colorado, we held a cookie bake-off at our house. Nancy, Marco, Julia and Trevor were the contestants, while I played the roll of Tim Gunn, their culinary advisor. Steve joined us for the judging. It was so much fun that we decided to make it an annual(ish) event.

When our family made plans for a June visit to Colorado, we all agreed that we simply HAD to have another cookie bake-off while we were there! Trevor got right to work creating a Perler bead prize for the winner, using his beloved glow-in-the-dark beads to spell out COOKiE on a trophy. 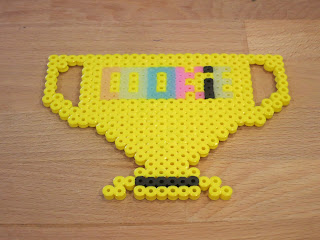 Nancy assembled an interesting variety of ingredients for contestants to add. Not even Tim Gunn was sure what Torani syrup would do to cookies. (Alas, Tim Gunn still does not know, as no one chose to use it.) 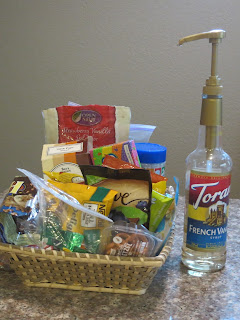 Last year, I'd created intentional scarcity of the ingredients so that no more than two contestants would be able to select the same item(s) before they ran out. Nancy didn't do this, which led to some interesting results...

As before, I made the base dough and divided it into four parts. The contestants drew numbers from a hat to determine their baking order. First up was Julia (age 8), the reigning champion. 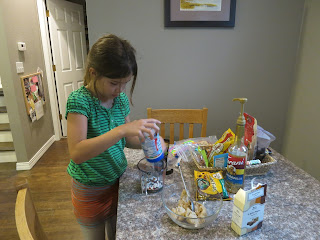 Julia went straight for the mint chocolate chips, having won last year's event with a mint-flavored cookie. She added another mint element, chunks of Andes Mints. She asked me to help her pound a chocolate See's lollipop into bits to add to the cookies. Next, she added mini marshmallow bits. So far, so good. Her final ingredient was a sprinkle of Rainbow Nerds. Tim Gunn cautioned her, asking whether fruit flavors and mint go together. She was confident that they did. At the very least, they added really pretty dots of color to the cookies, which she named "Creamy and Crunchy." 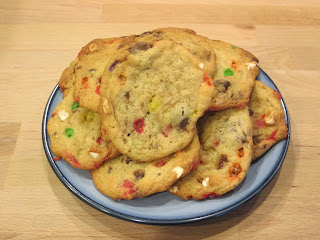 Trevor (age 9) was the second baker. To my surprise, the first three ingredients he added (mint chocolate chips, mini marshmallows and Rainbow Nerds) were ones Julia had selected too. However, Trevor added significantly more of each ingredient, particularly the Nerds, than Julia did. His fourth and final ingredient was crushed mini Oreos. He named his cookie "Minty Deluxe." They had far less structural integrity than Julia's, a clear result of having equal parts dough and mix-ins. 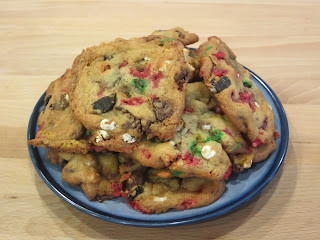 The third baker was Marco (age 10). He immediately reached for the Nerds and marshmallows and dumped in a significant amount of each. (Why am I not surprised that the kids all went straight for the purest form of sugar available?) Tim Gunn cautioned him not to add too many more mix-ins, as the cookies were already more candy than cookie. He sprinkled in a few Heath toffee bits and then asked me to smash up some Icebreakers Strawberry Sours. I was skeptical. Do fruity Nerds, marshmallows, and toffee need strawberry-flavored powder too? He was confident that they did. He named them "Another Very Good Cookie."

Unfortunately, when Marco's cookies emerged from the oven, it was clear they had almost no structural integrity. I had to scrape them off the pan. I arranged them so that the least-mangled ones (those that actually resembled cookies) were on top. 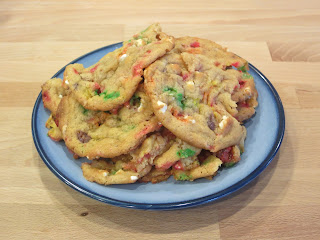 The fourth and final baker was Nancy (age 42). She regretted not following Tim Gunn's advice last time and was determined not to make the same mistake. She added butterscotch chips, white chocolate chips, macadamia nuts and a little bit of Heath toffee bits to her cookies. She was concerned that she had too many mix-ins for the amount of dough, but Tim Gunn reassured her that they would be fine. They were. She named them "Sweet Redemption." 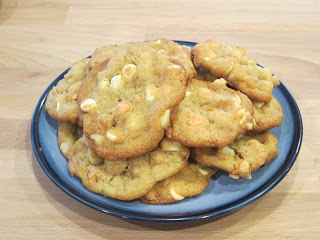 When all the cookies were cool and plated, we sat down for judging. One by one, each contestant introduced their cookie. This was the first that anyone (besides me) knew what mix-ins the others had chosen. Here is Trevor, talking about "Minty Deluxe." 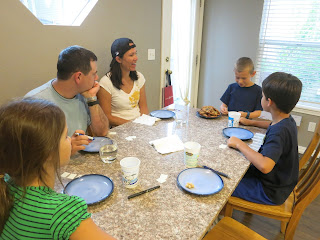 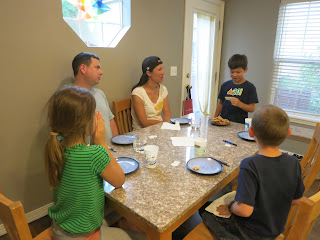 Each judge scored the cookies on a scale of 1-10. The contestants graded their competitors' cookies, but not their own. This time, I clarified that I didn't want any fractional parts besides 1/2, having had to do far more math than I wanted to last time in order to deal with scores like 8.335 and 7 15/16. I tabulated the scores while the contestants went to the stew room.

There was a clear winner. Trevor had requested that I cover the winning plate of cookies with a cloche and reveal it dramatically like Ted Allen does on Chopped. Due to the lack of cloches in the Salomone household, I hid the winning cookies under a dishtowel and called the contestants back to the table.

All eyes were on the covered plate. I whisked away the towel to reveal the winner.... 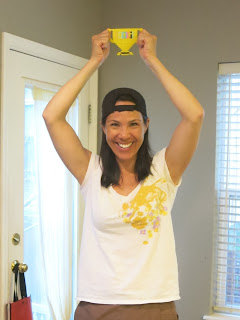 Nancy's "Sweet Redemption" cookies were just that! She now holds the title until our 3rd Annual(ish) competition! Congrats to all the contestants for another great competition.
Email ThisBlogThis!Share to TwitterShare to FacebookShare to Pinterest
Labels: Cooking Competition