After trying and liking what I discovered to be overripe feijoa, I was eager to get my hands on a perfectly-ripe one to see how it was supposed to taste. I started stalking the produce aisle (not for the first time), but the feijoa never reappeared. However, my disappointment turned to glee when I spotted something different where the feijoa had been.... rambutan!! 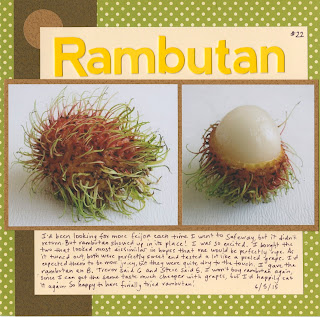 I'd had rambutan on my must-try list for years. I'd almost given up hope and was considering trying canned rambutan as part of 43 New-to-Me, but I knew that, at best, the canned version would pale in comparison to the fresh version. I'm so glad my patience was rewarded!

I bought the two rambutan that looked the most dissimilar, hoping that one of the two was properly ripe. As it turned out, both were. They were delicious. The taste and texture were similar to a peeled grape, though not quite as moist. I gave rambutan an 8. Even though I really liked it, I won't be buying it again. Grapes are so similar, but much, much cheaper.