I was picking up produce at Safeway to make dinner for friends a few weeks ago when I spotted something I didn't recognize, called feijoa. It looked similar to an avocado, though a paler green and somewhat more oblong. I gave it a sniff and guessed (correctly, as it turns out), that it was a tropical fruit. I put it in my cart, thrilled to have stumbled on something that I'd not only never had, but never even heard of! Even the checker hadn't heard of it. She said it was the first time she'd ever seen one in her line. She had all sorts of questions for me about what it was, how it was prepared, what it tasted like, etc. I told her I had no idea, briefly explained 43 New-to-Me, and said I'd let her know how it was the next time I was in.

I googled feijoa when I got home to figure out what to do with mine. This video was very helpful. Right before dinner, I pulled out the feijoa with much fanfare, cut it in half, and discovered that the one I'd bought was somewhat overripe. Drat. We ate it anyway and found that it was quite delicious! The texture was a bit grainy like a pear, while the flavor was sweet, tropical and fruity, with hints of strawberry and maybe papaya. 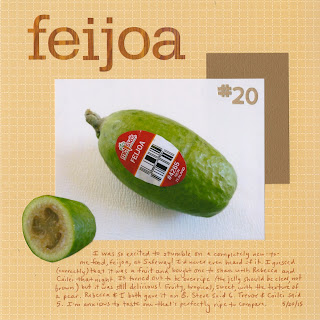 I gave the overripe feijoa an 8, as did Rebecca. Steve gave it a 6, which is shocking considering he hates every tropical fruit except pineapple. Trevor and Cailei each gave it a 5. We were all eager to try the perfectly ripe version to see how it would compare.

Alas, it was not at the store the next time I was there, nor in any visit since. I'm going to keep my eye out for it though!
Email ThisBlogThis!Share to TwitterShare to FacebookShare to Pinterest
Labels: 43 New-to-Me, Layouts