Have you ever heard of a shoebox float? They've been showing up as craft categories at county fairs recently. Basically, you turn a standard shoebox into a themed parade float. While I've seen them before, this was my first time making one. I decided to go with a Christmas theme by turning the whole float into a sleigh. 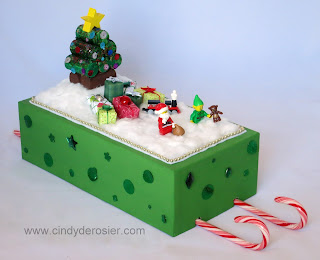 I started with a coat of gesso, then painted the shoebox a Christmas green. I cut tabs in the box and glued candy canes in the front and back to make sleigh runners. I glued random green sequins on each side of the box.

I cut a piece of white felt just smaller than the top of the float and glued it down. I trimmed it with gold beads, then glued cotton balls in place to make snow. I added a cork Christmas tree with a wooden star on top. I raided Trevor's Legos and borrowed Santa, the elf and the train. They're held in place with Glue Dots.

I tried a bunch of different techniques to make the presents before settling on something that worked well. I used scraps of patterned paper to wrap large dice and small blocks. I added an embroidery floss ribbon to most of the gifts, then topped them with a plastic gem. 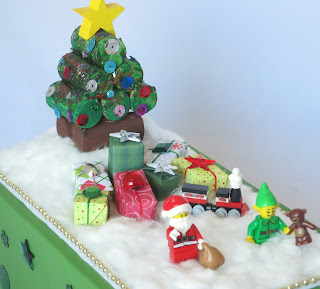 Here's another look at the float, with a better view of the sleigh runners. 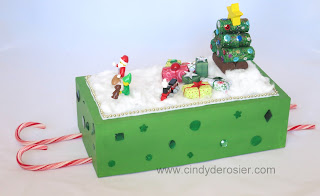 I'm really happy with how this came out. I definitely see more shoebox floats in my future.
Email ThisBlogThis!Share to TwitterShare to FacebookShare to Pinterest
Labels: Crafts for Kids