Two weeks ago, I shared my first drafts for a "Follow That Recipe" contest I was entering. Here is the recipe we were to follow: 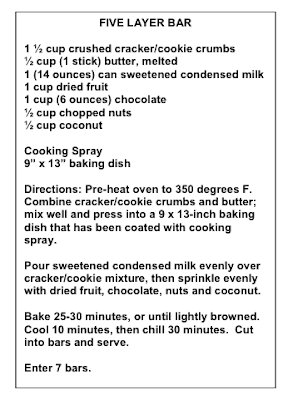 Both of my first drafts were well-received (equally so, frustratingly) so I was on my own to tinker and come up with a winner. The area that needed the most help was the cracker/cookie crumb layer. My biggest problem was that there wasn't nearly enough crumb to fill the entire bottom of a 9" x 13" pan. But, since I had to follow the recipe exactly, that was out of my control. I ended up heaping the crust evenly within a 7" x 11"ish area, knowing that I could serve the judges bar cookies from the center of the pan and not the edges. I would up the crumbs to at least 2 cups for any future, non-contest baking.

Besides there not being enough of the crumb layer, it came out pretty greasy in my trials. A stick of melted butter is WAY more than is needed for 1.5 cups of crumbs. Since I couldn't change the quantity of crumbs or butter, I decided to change up the type of crumbs I used, For my first batch I'd used shortbread cookies and vanilla wafers for my second batch. Both were tasty, but too high in fat to work well with that much butter. I guessed that the chef who wrote the recipe had graham crackers in mind instead of cookies, so I headed back to the store. Sure enough- graham crackers had less than half the fat as the same volume of vanilla wafers, which in turn had much less fat than the shortbread. Excellent!

I whipped up a final batch of cookies with chocolate graham crackers as the crust, semi-sweet chocolate chips, equal parts dried cranberries and cherries, pecans, and unsweetened, shredded coconut. I cut 7 generously-sized bars from the middle and plated them for the judges. 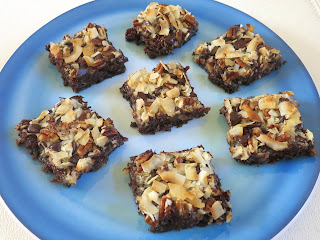 There were 16 competitors, with cash prizes for 1st, 2nd and 3rd. The judging was live, so we watched as the two judges tasted each entry while the clerk read the ingredient choices each contestant had made. That was very interesting. The cookie/cracker choices were very diverse: everything from vanilla wafers to gingersnaps to chocolate chip cookies to shortbread. The chocolate choices were about 50/50 milk vs. semi-sweet, with one or two contestants who used white chocolate. Almonds were the most popular nut, though peanuts, pecans, macadamias, walnuts, pistachios and cashews were all represented. More than half of us used dried cherries as the fruit, although I was the only one to add cranberries too. Others used dried pineapple, apricots, raisins, oranges, and mangoes (which, apparently, is the preferred plural of mango).


After they'd tasted each bar, the judges conferred and began announcing winners. Third place... not me. Second place... not me. First place... also not me. Drat. At that point, they invited all the contestants forward for individual comments and critique. I learned that my cookies took 4th. They didn't have any constructive criticism; everything about my cookies was good, but they were just a hair less interesting or creative than the ones that placed higher. I listened to the 1st place contestant's review. They liked her flavor combinations, of course, but also that the items were chunky enough to clearly identify individual flavors. She offered me one of her winning cookies, which I happily accepted. It had a graham cracker crust, large dried cherries, white chocolate and large slivered almonds. It was delicious. 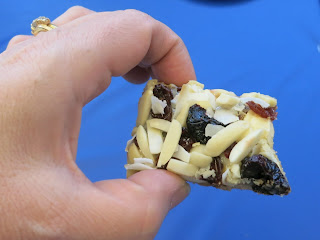 The judges had each prepared their own version of the recipe to show how they would have interpreted it. Their intention had been to pass out samples, but state law forbid them from doing so, which was a major bummer. But we did get to look at each and hear what each judge did. The first thing we noticed with the first judge's cookies were that they had been baked in a square pan and not the rectangular one required by the instructions. Consequently, she had a nice, thick crumb layer. We immediately jumped on that, asking if changing the pan size would have been OK. The judges said yes, though the written instructions we all received said to follow the recipe exactly. We also noted the whole walnuts, while the recipe specified chopped nuts. 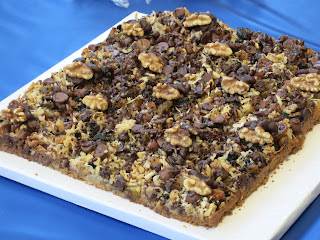 The judges were emphatic that they would have liked to see us 'play with the recipe a little' and not be so literal in following the instructions. None of us did because the entry form said to follow the recipe exactly. The judges said they will write the instructions differently for next year, because they do want to see creativity. As an example, the second judge showed his version of the cookies, which were garnished with whole pieces of the chopped fruits in the bars. 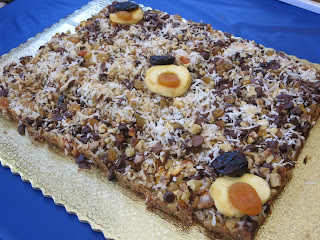 This contest was a lot of fun. I'm looking forward to playing along next year.
Email ThisBlogThis!Share to TwitterShare to FacebookShare to Pinterest
Labels: County Fair, Recipes