New-to-me food #18 was a candy bar, specifically the Cadbury Crunchie. I found it at an Indian market. I'd never heard of it (though I later learned it's been around since 1929) and I was intrigued by the description of its "golden honeycombed centre." I hesitated for a bit before buying it. As tempting as it is, my goal for 43 New-to-Me is not to try 43 different candy bars (or other desserts I can be almost certain I'll like) for the first time. There's not a lot of risk there.

But while I don't want to just try 'safe' new foods, I don't want my project to be 43 foods I end up not liking. An occasional interesting dessert amongst the 43 new foods is perfectly ok. I don't really like honey and I think Bit-O-Honey is the most disgusting candy ever created, so there actually was a risk for me trying candy with a "golden honeycombed centre." As it turns out, the center had the texture of honeycomb, not the taste. It tasted like caramel and was absolutely delicious. 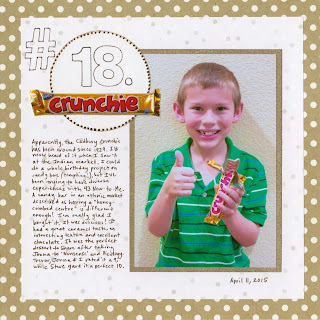 As you can see, Trevor gave it a thumbs-up. Four of us split that one candy bar. Trevor, Jonna and I each rated it a 9, while Steve gave it a perfect 10.
Email ThisBlogThis!Share to TwitterShare to FacebookShare to Pinterest
Labels: 43 New-to-Me, Layouts