When I blogged about trying Big Red soda for the first time, I certainly did not anticipate what would happen next! I got a comment on my blog from Amanda Fay at Big Red, asking me to get in touch. Turns out they have a program that generates a daily list of where Big Red is mentioned online. Their communications director saw my post and forwarded it on to Amanda, who offered to send me a different Big Red product to try. Exciting! Obviously, I said yes.

I was very curious what she would be sending to me. The Big Red website shows four other flavors of soda (Big Blue, Big Manzana, Big Peach and Big Pineapple), in addition to a zero-calorie version of Big Red. Would it be one of those?

Nope! It turned out to be the limited-edition "Vintage Reset" version of Big Red. The 18 oz. cans proudly proclaimed, "Made with real sugar." Intriguing! I'm a fan of sugar, so I was eager to try it. I still had a few cans of the regular Big Red from the pack I bought originally, so I decided to do a blind taste-test to see how the two compared. 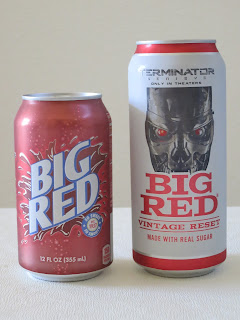 The first step was finding some eager volunteers to taste along with me. I brought both the regular and the vintage reset cans to a family gathering, where six people agreed to do the blind tasting. I prepared two sets of tasting cups, marked A and B, then asked my brother-in-law (Brian) to pour the samples into the cups without letting any of us know which was which.

We started by smelling the samples. Sample A had a much stronger smell than Sample B; both smell like bubblegum, but A was so much more intense. Their appearance was the same. On to tasting. I noticed an immediate difference. Sample A was creamier, had a stronger taste, and was tastier than Sample B. Others added that Sample A was more robust, sweeter, and fruitier than Sample B. One person thought Sample B was more carbonated, but no one else noticed that. We each selected our favorite... all the way around the table, all six people chose Sample A.

Those of us who had tried the regular Big Red felt confident that it was Sample A. It tasted just as we remembered it tasting: creamy, sweet, intense, and fruity. Sample B was good, but it paled in comparison with Sample A, so that must have been the new-to-us vintage version. We called in Brian to reveal which soda was which. 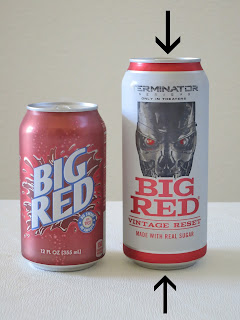 We were all wrong. The version we overwhelmingly preferred was not the version we'd had before, but rather the limited-edition Big Red with real sugar. Fascinating!

Thank you to Amanda and Big Red for the soda. You make an excellent product. If you ever need a taster, you know where to find me.
Email ThisBlogThis!Share to TwitterShare to FacebookShare to Pinterest
Labels: 43 New-to-Me