Ever since I started my 43 New-to-Me project, friends have been sending me suggestions of interesting foods to add to my list. My friend Izzy, who lives in North Carolina, has been especially determined to find a Southern delicacy for me to try. The first dozen things she mentioned I'd already eaten. I've traveled to the South a handful of times, plus I've had many friends over the years with a Southern background who have fed me random stuff. Then, of course, there was the time I tried making fried green tomatoes without ever having seen or eaten them.

Izzy was undaunted. Every once in a while, I get a message: "Hush puppies?" Then, "Tomato pie? Corn pudding?" Later, "Hummingbird cake? Divinity? Beignets? Moon pie?" And on and on. I'd had them all. And then, she hit on one I'd never had. I'd never even heard of it... 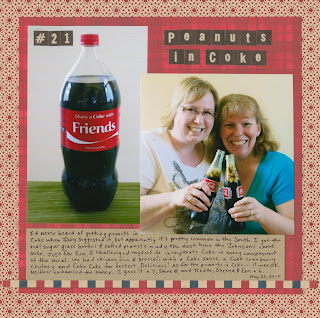 Apparently, it is very common in the South to open a glass bottle of Coke, take a swig, and then pour a packet of salted peanuts into the bottle. Check out this link from Coca-Cola itself, as well as this link from Serious Eats. And here's a fun link from Sprinkle Bakes.

Izzy went on to suggest that I try an entire menu of Coke. How fun! I'm always up for a cooking challenge. When my friend Sheena's family came over for dinner, I pulled out the peanuts and the Coke bottles and was surprised when Sheena knew all about it. She'd never had peanuts in Coke, but it was something her mom used to do.

Once the drinks were served, I plated up chicken, rice and broccoli with a Coke-pineapple sauce and an amazing Coke Cranberry Chutney. 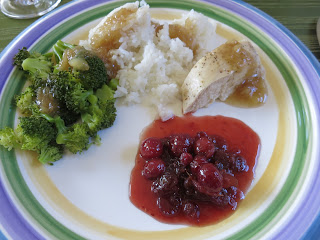 For dessert, I used this recipe for Chocolate Coke Cake. 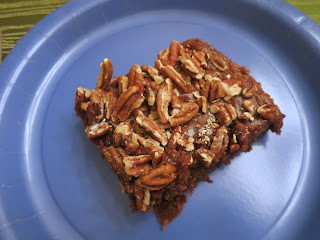 The cake and the chutney each deserve a 10 out of 10.... although I should have either served the chutney with a slotted spoon or added some thickener to it. But it was delicious with the chicken, rice and broccoli, so the extra juiciness was fine.

As for the actual 43 New-to-Me item of peanuts in Coke, it was fine. I drank it all and tapped the bottle to eat the peanuts at the end as instructed. I didn't think either the Coke nor the peanuts were improved by being mixed together, but they weren't made worse either. I gave this combination a 7. Steve rated it an 8, while Trevor, Sheena and Ken each gave it a 6.

It's been just over 3 months since I started my challenge and I'm at the halfway mark, not only with trying foods but with scrapping them too! It's been so much fun and I absolutely love the album. It's going to be great fun to look back on years from now.
Posted by Cindy deRosier at 5:00 AM