Crafts of my Childhood: Spirograph

Anyone else have Spirograph as a kid? 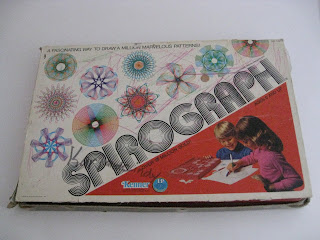 I LOVED it.  I thought it was so cool.  I spent countless hours copying the designs on the box and creating designs of my own.  I had a folder where I kept my favorite Spirograph creations, organized by which shape I'd used.  I wish I still had it, if only to take a picture.

Fortunately, my mom kept Spirograph.  The pens are gone, but otherwise the set is in good shape.  What a flood of memories when she brought it to me!  Trevor and I tried it out.  He liked it, but struggled with many of the shapes. 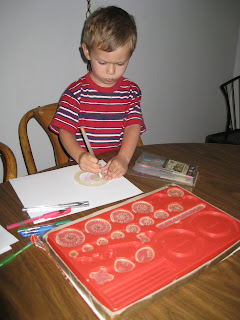 I also had difficulties!  I'd forgotten how challenging some of the shapes can be.  I suppose I could blame the pens, as we were using an assortment of gel pens instead of the official Spirograph pens, but I'm guessing that's it's simply a matter of practice.
Here's one of the better designs I did.  Plenty of mistakes, but just as cool as ever. 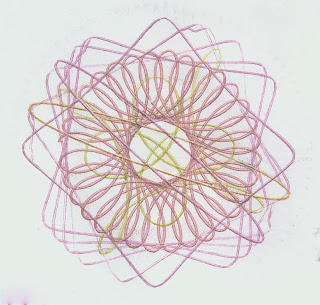 What a blast from the past!
Posted by Cindy deRosier at 5:00 AM
Email ThisBlogThis!Share to TwitterShare to FacebookShare to Pinterest
Labels: 1970's Craft Flashback, Crafts for Kids