When I went to my sister's house at Halloween, she gave me a Rotato.  No, we don't exchange Halloween gifts, and no, she didn't pay for it.  It was on the giveaway table at work and she passed it along to me. 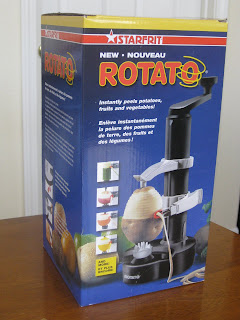 While we do have a largish kitchen, we don't have infinite storage so I'm somewhat picky about what I'm willing to keep.  I was skeptical about whether the Rotato would make the cut because I don't peel a ton of vegetables and, in general, I am not a fan of unitaskers. Still, I decided to give it a go. 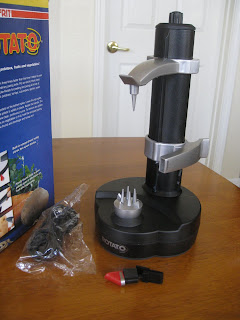 Actually, Trevor gave it a go.  He's been DYING to try the Rotato ever since Aunt Kari gave it to us. 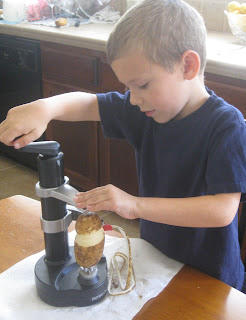 The pros: It was very easy to assemble and held the potato securely.  It peeled the potato cleanly in a long, continuous peel.  It was easy enough for a child to work it and much safer than a knife or traditional vegetable peeler.  The cons: It did not peel the top nor the bottom of the potato.  The directions said to put a paper towel under the Rotato to catch the peel, but that meant that the Rotato's non-stick feet didn't cling to the table as they should.  It peeled considerably deeper than a standard vegetable peeler, potentially resulting in more waste.

I say "potentially" because I couldn't stand wasting all that potato.  I sliced the long potato peel into pieces and threw them into some hot oil.  I pulled them out, sprinkled them with salt, and served them with ketchup on the side.  Delicious! 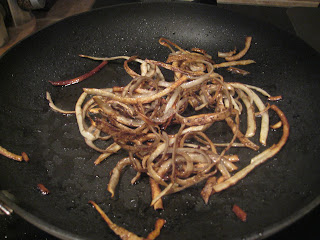 I haven't made a final verdict about the Rotato.  I still need to try it with a few other of the suggested fruits and vegetables before I decide if it has earned a spot in the cupboard.  By the way, the potatoes that we peeled?  I made something awesome with them, which I'll tell you about on Monday.  A little hint: they were part of Goal 33.
Posted by Cindy deRosier at 5:00 AM
Email ThisBlogThis!Share to TwitterShare to FacebookShare to Pinterest