My friend (and former dance partner) Adam Diament is incredibly awesome. What I love most about Adam is that he is always challenging himself, always learning (he has a PhD and a law degree), and is always accomplishing something new. I blogged about him and his super cool counties project here. His latest project was writing a book.


The Top 10 Jewish... contains over 100 ranked lists, ranging from the Top 10 Jewish Summer Olympians (Marc Spitz, Mitch Gaylord, Kerri Strug), the Top 10 Peculiar Commandments ("Do not destroy fruit trees, even in time of war"), and the Top 10 Gentiles Who Seem Jewish (Joy Behar, Jason Biggs, Robin Williams). The lists were fascinating.  Some were informative, some controversial, and some hilarious. Many prompted me to head to Google to learn more.

But of all the lists, the one that interested me the most was the Top 10 Jewish Foods. When I made my list of 40 Things, I decided that one of the things I wanted to do was try any of the foods on the list that I hadn't had before.

In case it isn't obvious, I'm not Jewish. But between my years of studying the Old Testament in Sunday School and an incredibly challenging Jewish Studies course in college, I feel like I have a general idea of the basics. I've attended three Jewish weddings (including Adam's), I've been to a seder, and I was at a friend's baby-naming ceremony at a synagogue, so I've had a number of opportunities to eat Jewish food. But there were still a few foods on the list that I had never tried. So, without further ado, here is my attempt to eat the Top 10 Jewish Foods.

1. Latkes
I've had latkes before many times. I've made them several times. They are, in a word, delicious.

2. Matzah ball soup
Believe it or not, I had never tried matzah ball soup until last month! I've always wanted to try it but never specifically made plans to make it or seek it out. We recently ate at a New York style deli and there it was on the menu. It was so good! 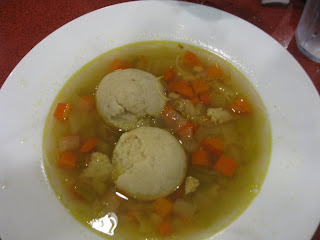 3. Bagels, lox, and cream cheese
I *love* bagels, with or without cream cheese. Lox, no. I've tried it before - a teeny, tiny, itty bite to get someone off my case about not trying it. I am open to trying most foods, but there are two categories that repulse me: insects and seafood. If you gave me a choice between eating a cockroach or eating catfish, it would be a tough decision. There's a good chance I'd choose the insect, as the thought of seafood absolutely nauseates me.

People always assume I grew up in a family that didn't eat seafood. Sadly, that is not the case. My parents love it and we had seafood at least once a week growing up. I was repulsed by it then and continue to be repulsed 40 years later. "But _____ is so good!" people tell me. I don't care. It's disgusting and shouldn't be a food and I don't want to eat it. I hear that grasshoppers are tasty, but I have no more interest in trying your calamari or salmon or mussels or trout than I would in trying your plate of grasshoppers, beetles, moths, or crickets. I have eaten a tiny bite of every seafood that exists to get people off my case. (A surprising number of people over the years have been bothered by my not eating seafood.)

4. Challah
What's not to love about challah? Bread is my favorite food, so of course I've had challah many times. I've made it once or twice as well.

5. Knish
I had a vague idea of what a knish was when I read the Top 10 list, but I'd never had one. I did a bunch of research and chose this recipe to make my own. There were a lot of steps - making the dough, making mashed potatoes (enter the Rotato!), rolling out the dough, filling and shaping the dough, then finally baking. At one point, I swore I'd never make them again no matter how good they tasted. But then I actually tasted the finished product. They were absolutely delicious. Imagine a thin, biscuit-like crust surrounding smooth and rich mashed potatoes. Fantastic. I'd planned to freeze the leftover knishes but we ended up eating them for dinner three nights in a row. Yum. 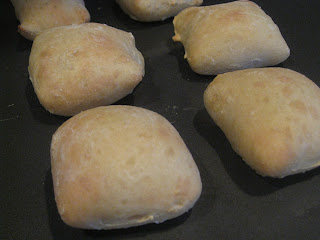 6. Gefilte Fish
I can't swear that I've tried gefilte fish, but it's highly probable (see #3). If I've never actually tried it, oh well. I will not be eating it in the future.

7. Hamentashen
When I first read the list, I had to Google hamentashen to find out what it was. Turns out it's a triangular-shaped cookie with a fruit filling. I *might* have had them before, but unlike the gefilte fish, I'm more than willing to try it again just to be sure. After reading a bunch of recipes, I chose this one to make. I added lemon zest to the dough (most of the other recipes suggested that) and used raspberry jam as the filling. They were SO good. 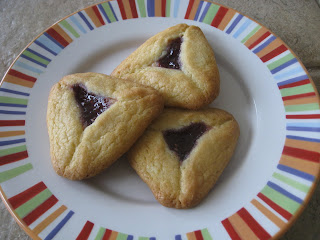 8. Matzah brei
Back to Google for this one. I know what matzah is, obviously, but I didn't know about the brei part. Well, it turns out brei means "fried" and that matzah brei is essentially softened matzah in scrambled eggs. I like matzah and I like scrambled eggs. As I read on, I learned that there are two factions when it comes to matzah brei: those who like a savory version with onions and those who like a sweet version with cinnamon sugar or jam. Wait, what?! Cinnamon sugar on scrambled eggs?! Sounds like crazy-talk.

I was wary about the sweet version and decided I was firmly in the savory camp. But the more that I thought about it, the more I realized I needed to try both versions since they are equally popular. I announced to my ever-tolerant family that we'd be having matzah brei for both dinner and dessert. Neither my husband nor my son was particularly enthusiastic.

Following these recipes, I carmelized some onions, soaked some matzah in water, and added both to eggs. A little salt and pepper, then I scrambled them up and served them for dinner. 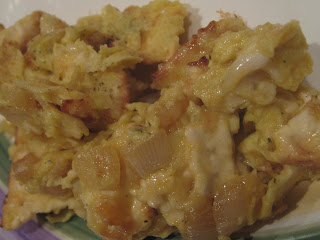 I thought it was pretty good. Steve and Trevor both picked at it, but eventually ate it and declared it ok. Then I returned to the stove to make the sweet version. This time, I soaked the matzah in milk, added a pinch of sugar, cracked in eggs, and scrambled that up. I got out raspberry jam and cinnamon sugar. I tried both the jam..... 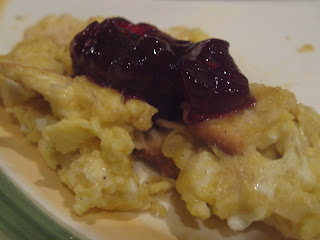 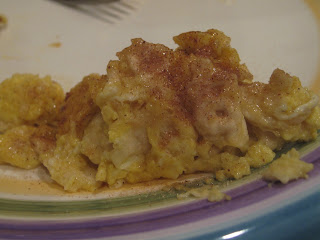 I was worried that sweet eggs with mushy crackers in it would be awful, but I actually loved it. The jam was good, but the cinnamon sugar was outstanding. Trevor agreed and ate every bite. Steve had the opposite experience. He could barely choke down the three small bites I'd served him. He absolutely hated it. Of course, he doesn't have a sweet tooth, while Trevor and I love anything and everything sweet.

9.  Falafel
I've had falafel a handful of times. I like it. I've never made them though - something to try in the near future.

10.  Hummus
I've had hummus many times and like it too.


So there you go! Goal #33 accomplished, just in time for (C)han(n)uk(k)a(h)! (You can find out the Top 10 Ways to Spell (C)han(n)uk(k)a(h) on page 5 of Adam's book.)  Thanks to Adam for the awesome book and the inspiration for this goal. I strongly recommend his book to any of you, Jewish or not. It's a really fun and interesting read!
Posted by Cindy deRosier at 5:00 AM
Email ThisBlogThis!Share to TwitterShare to FacebookShare to Pinterest
Labels: 40 Things, Recipes