Trevor has been in Scouts since he was six and loves it. He earned the Arrow of Light (the highest Cub Scout rank) in March 2017 and has been working on Boy Scout ranks ever since. He has completed all the requirements for First Class and is scheduled for a Board of Review on Wednesday. We're so proud of the hard work Trevor has put in to reach this milestone.

When Boy Scouts started, First Class was the final and highest rank, signifying that a boy was a complete outdoorsman. Now, in addition to the original four ranks, there are three additional ranks: Star, Life, and Eagle. With the completion of First Class, Trevor is officially on his way to Eagle. He has a lot to do along the path, but I'm confident that he will get there.

Why I am so confident Trevor will get there? Steve and I support and believe in him, of course, but it's much more than that. Trevor has the support of many others: his fellow Scouts, his leaders, other family members, and friends. Most important of all, he has mentors, those who have gone before him and reached Eagle. Cousin Ian. Peers Mateo and Charlie. Church friends Garrett and Les. And so many others. 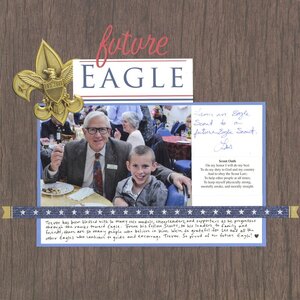 This photo was taken at a church event. Les and Trevor were seated next to each other and spent time chatting about Scouts. Les gave the print to Trevor and signed it "From an Eagle Scout to a Future Eagle Scout." I knew I had to scrap it. The wood grain background is from the Great Outdoors collection from Paper House Productions and the star border sticker is from their Let Freedom Ring collection. I cut the Eagle emblem, Eagle title, and Scout Oath from an extra copy of the program from a fellow Scout's Eagle Court of Honor. The script letters are from Websters Pages. I'm so happy with how this page turned out and can't wait to see all the great things Trevor accomplishes with so many people behind him.
Posted by Cindy deRosier at 5:00 AM