I was 16 the first time I met someone from Michigan. I was part of the California delegation attending the 1988 National 4-H Congress in Chicago. All 50 states were represented and we were all staying in the same hotel, so every elevator ride was an opportunity to ask the other teens where they were from. Everybody answered in words... except the people from Michigan. One after another, they answered my question of where they were from by silently holding up one palm and pointing to it with the other hand. It was weird and I had no idea what to make of this at first.

It didn't take long for me to learn that if a Michigander held up their right hand and pointed with their left, they were from Lower Michigan. If they held their left hand up sideways and pointed with their right, they were from the Upper Peninsula. The pointing finger told you exactly where. It's actually kind of brilliant, but not until the clueless girl from California was keyed in on the mitten situation.

Michigan was on my list to meet my goal of creating at least two crafts per state. Mittens seemed like a natural choice. My first thought was that it would be awesome to turn a Michigan baby's first pair of mittens into a darling Christmas tree ornament. I don't have a Michigan baby's first mittens, so I used felt. Affiliate links below. 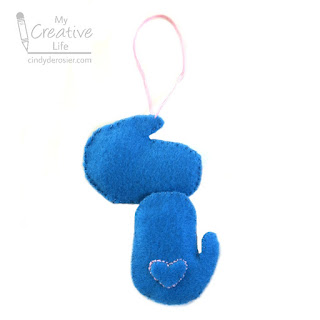 
If you have mittens, skip this step. Otherwise, cut mitten shapes from felt. You will need four identical pieces. Cut one small heart from the scraps.

If you have mittens, stitch a heart on one of the mittens in the location of your hometown. If you're using felt, sew the heart to your hometown. I chose the capital, Lansing, for my sample. We really enjoyed our brief time there.

Add Poly-fil to both mittens, pushing some into the thumbs. Stitch across the bottom to seal the stuffed mittens. 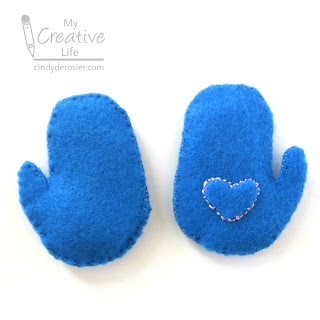 This makes me want to return to Michigan to explore the mittens state more thoroughly. Someday, I hope!