The Ten Most-Visited States in the US

After a closer look, I discovered subtle differences between the lists: some record international travelers only, some differentiate between lengths of stays (e.g., a single trip that lasts 5 nights 'counts' as five visits instead of one), some don't count visitors from within that own state, and some rank the states by amount of money spent vs. number of travelers spending that money. I even found one list that ranked the most-visited states based on surveys asking people where they like to vacation! It is clear that some tourism-based companies are motivated to get their state onto a most-visited list by tinkering with the data until it says what they want it to say. Obviously, there's no motivation to appear on a least-visited list, so finding accurate data is much easier.

In the end, I went with this list by the World Atlas. Before reading on, care to guess which states made the Top Ten? 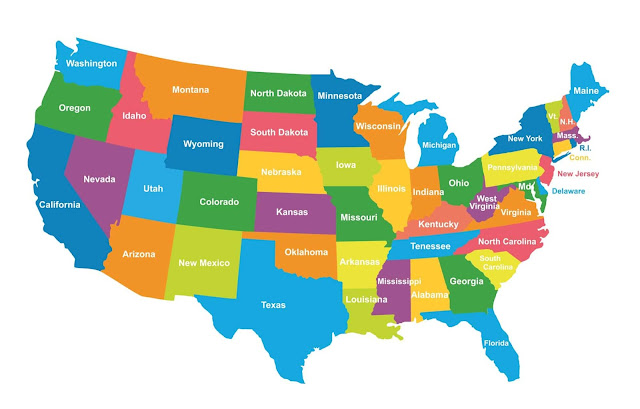 We love Hawaii! I'm not surprised it made the Top Ten, despite being so far from most of the US (although we're actually closer to Hawaii than we are to New England). We've traveled to Hawaii twice since Trevor was born and loved every minute. You can find all my recommendations listed by island here.

We haven't traveled to Georgia yet, but we can't wait to visit! Besides the Capitol, there are at least a dozen must-see places in Atlanta (MLK Jr. National Historic Park, National Center for Civil and Human Rights, Carter Presidential Library, World of Coca-Cola, Atlanta Botanical Garden, Ponce City Market, and so much more).

There is so much to do and see in Arizona! I've loved all of my visits there. You can read all about my favorite places to go in the Phoenix area.

I wouldn't have expected South Carolina to appear so high on the most-visited list, but that's probably because I've never been there and don't know everything it has to offer! I can't wait to visit and check it all out.

Virginia has the distinction of being the only state that all three deRosiers have visited, but never with each other! I hope to fix that with a family trip someday. In the meantime, you can read my recommendations from my own travels in Virginia.

I expected New York to rank higher than #5 on the most-visited list. There is so much to see and do! I haven't spent time outside of New York City, so even though I love it there, I'm hoping to tour the rest of the state someday.

We absolutely loved our Austin trip in 2018! But it's a huge state. There's a whole lot more of Texas that we need to explore in the future.

I'm sure that Las Vegas is the primary reason that Nevada ranks #3, although Lake Tahoe and Reno certainly draw people as well. If you're looking for somewhere else in Nevada to visit, we thoroughly enjoyed our time in the state capital, Carson City.

Disney World is the most-visited theme park in the world, so it's not surprising that Florida would rank so high. There's so much else to see in Florida, including fabulous beach towns along the Atlantic and Gulf coasts. I've never been to the Panhandle though, and hope to make it someday.

Did you guess that California is #1? I knew it! The Golden State has it all, no matter what you want to see. I love it here and am not surprised that people from all around the world flock to see everything that California has to offer.
Email ThisBlogThis!Share to TwitterShare to FacebookShare to Pinterest
Labels: US Travel