As COVID-19 has raged on for far too many months, I've been increasingly worried about what would happen here in California as summer approached. What would people do when temperatures soar and the usual cooling centers they depend on (such as the mall) aren't open? What about Public Safety Power Shutdowns (PSPS), when people flock to libraries for the internet access they need for work and school? While our libraries are technically open, the capacity is extremely limited and you have to make a reservation for a 1-hour time slot to visit. And the biggest concern of all - what if fires force people to evacuate? Where can displaced people go when social distancing means the usual places can only hold a tiny fraction of their usual capacity, and friends may be reluctant to welcome people into their homes? I desperately hoped that we would be spared the horror of a natural disaster occurring during a pandemic. We were not.

On Sunday, August 16 we were woken up at 4:00 am with crazy wind and lightning. Lightning is very rare here, but when it does happen, it comes with rain. Not this time. Dry lightning, strong winds, and golden hills mean that a single strike could start a fire that could spread quickly. I wasn't too scared for us, as there was quite a bit of time between the flashes and booms, but I was worried for wherever it was the lightning was striking. Over the next day, the so-called 'lightning siege' consisted of over 10,000 strikes that started hundreds of fires, including three in next-door Napa County. By the Tuesday, August 18th, those fires were sending a lot of smoke our direction.

During the very early hours of Wednesday, August 19, Steve and I each woke up and noticed our power was out. Around 2:00 am, Steve got up and checked to see if there was an obvious problem (no) and went back to sleep. At 5:14 am, we were still sleeping and didn't see this message:

This is an ADVISORY due to a wildfire north of Fairfield near Pleasants Valley Rd and Cherry Glen Rd. This advisory is for the following areas in Fairfield:

It wasn't until the 6:00 hour that Steve checked his phone and saw a message from a Scout friend saying, "If we evacuate, we'll need to leave the Scout trailer behind." And then a message from a different friend on my phone. "Are you going to evacuate?" Then I saw the advisory. After a brief discussion, Steve and I made the decision to evacuate. If the fire was coming this way, it'd be better to get out early. Even if the fire didn't come our direction, we couldn't stay with the power out.
We loaded up our cars with the things we most wanted to keep safe, packed enough clothes and bunny supplies for a week, and headed to our friends Ken and Sheena's house on the other side of town. We dropped off Trevor so that he could do his distance learning, parked Trouble in his carrier in front of a fan, and headed back to our house, where we did a few last-minute tasks. As we left our house around 11:00 am, Steve took this photo: 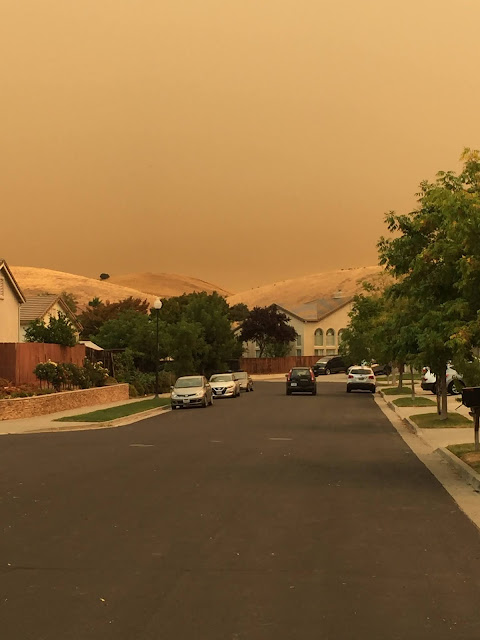 We picked up Trevor and Trouble and headed to our friend Suzzi's house in Sacramento. Traffic was surprisingly light and we arrived in time for Trevor to have lunch and then attend his 1:00 pm virtual class, his last of the day. (By this point, school was optional because of the evacuations and had been canceled completely for Thursday and Friday.)
The evacuation order for our area came at 2:42 pm. At that point, we'd been in Sacramento for two hours and were so glad we'd made the decision to evacuate when we did. I was hearing from friends saying there were too many cars and nowhere to go. The fire jumped I-80, forcing more neighborhoods to evacuate and making the traffic nightmare even worse. It's hard to express how grateful we were that we were safe with good friends who had welcomed us with open arms.
We slept surprisingly well on Wednesday night, considering our home was in danger. It was quite a contrast to my inability to sleep during the Atlas Fire. Staying with calming and caring friends, Trouble with us and our most important items safe made, made all the difference.
This is what we woke up to on Thursday morning: 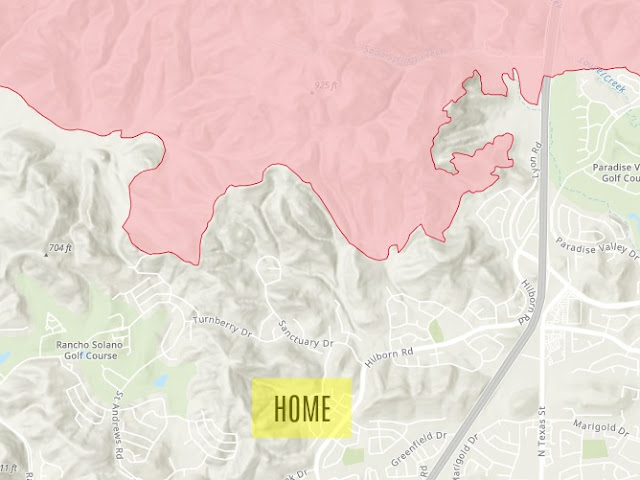 Thankfully, there were no structures or lives lost in Fairfield. Unfortunately, many in nearby Vacaville were not so lucky. My heart breaks for them.
At 10:00 am, we got notification that our mandatory evacuation was lifted. While we technically could go back, they advised evacuees to stay put due to risk of flare-ups. We decided to stay in Sacramento until the fire was officially contained in our direction and our power was back on.
On Saturday, August 22 our power was restored, but the forecast called for more dry lightning on Sunday. Since the last thing we wanted to do was go home and then re-evacuate, we stayed until Monday just to be sure. It turned out not to be necessary, but better safe than sorry. We really enjoyed the extra day with our friends.
It was crazy seeing all the burned areas once we reached Vacaville and into Fairfield. I took this photo from the car (Steve was driving): 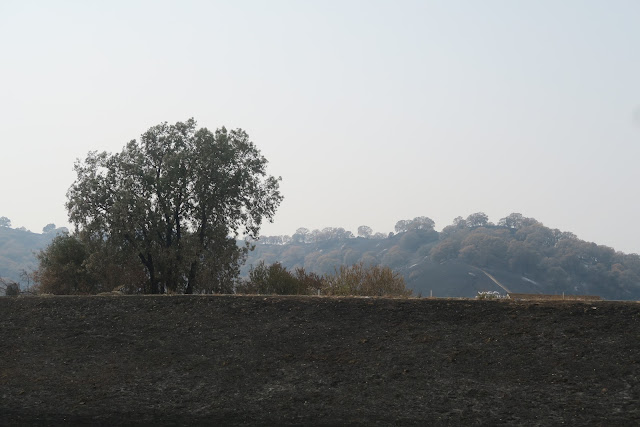 This is what our street looked like when we got home. The air was still a bit smoky, but not bad. You can see just a hint of a scarred hill. 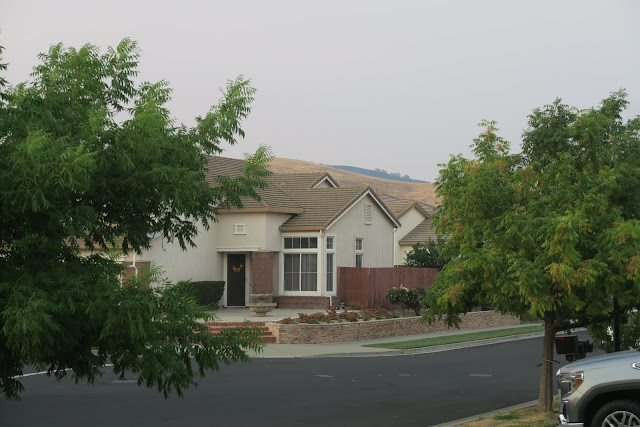 That hill ended up being the southernmost point of the still-burning LNU Complex. 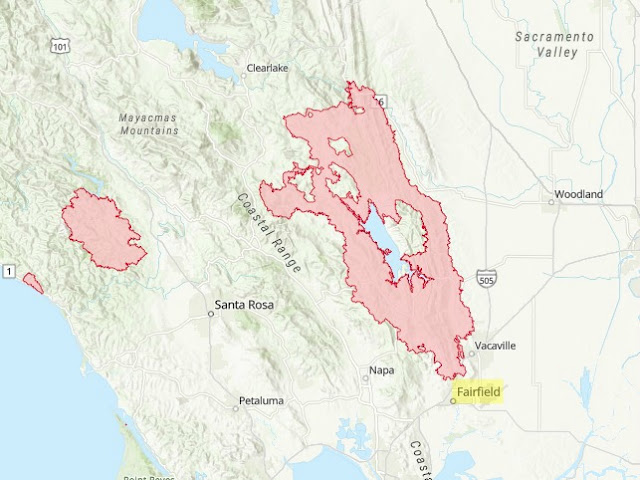 Here's that same hill, taken the next day from our upstairs window. As you can see, the air quality improved significantly overnight. 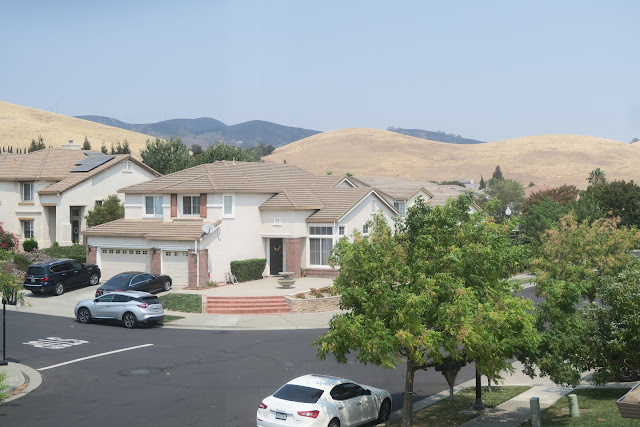 We are now settled back in to the routines of our daily lives. Things went perfectly for us: an easy evacuation turned into a mini vacation, but so many others weren't so lucky. It's too early to know what effect the fires might have had on COVID-19 in Solano County. We can only hope that we don't see a surge following this catastrophic fire. So many people stepped up to help not only friends and family, but strangers too. I am so grateful. This is what I posted when we returned home: 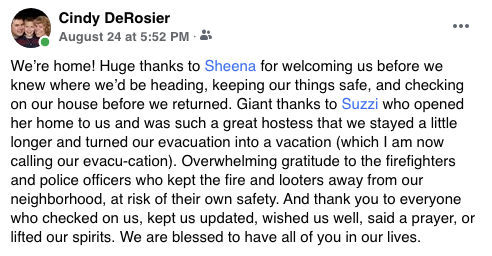 And thank you to all who are reading this. I'm so glad to have you in my life as well.
Posted by Cindy deRosier at 5:00 AM