The last time I documented a day in the life of Trouble deRosier was way back in 2014 when he was a much younger bunny. Quite a few things have changed since then, so I wanted to do an update.

Trouble's morning begins around 5:45 am, when I open the door to his cage. He hops out onto the carpet (we've added carpet to cover much of the hardwood floor as he's aged) and puts his chin down near my hand, asking to be petted. When I've groomed him sufficiently, he'll return the favor by licking my hand. He hops back into his cage and looks up expectantly, waiting for me to hand-feed him some pellets. I add a few more pellets (less than 1/4 c. total) to his dish and give him fresh water. 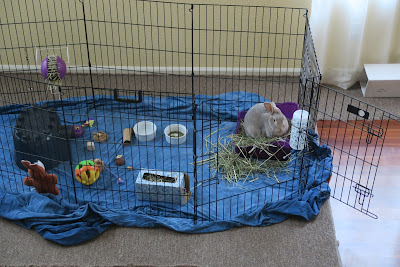 I head upstairs to my computer to start work. Sometimes Trouble follows me, sometimes he doesn't. On this particular morning (Monday 3/31), he didn't. Instead, he relaxed in his cage and played with his toys.

Trouble has trained Steve to give him a piece of Shredded Wheat each morning. When Trevor or I go in the kitchen and get out cereal, nothing happens. When Steve gets out cereal, Trouble is there like a shot. 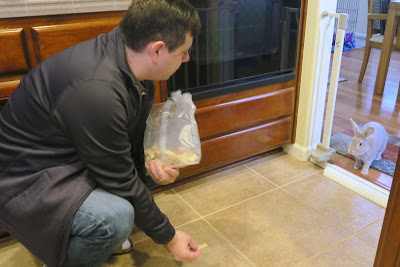 With a full tummy, Trouble headed to his farm box for a quick snooze. 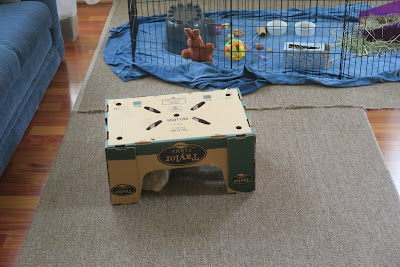 About 30 minutes later, he was back in his cage eating breakfast. 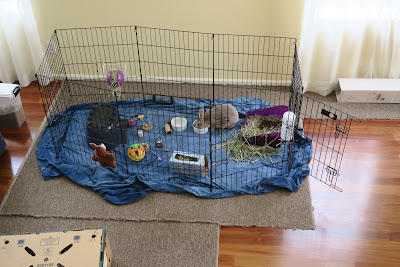 He came out of his cage and put his chin down for grooming. I took his picture instead (fully intending to groom him after snapping a quick photo).... 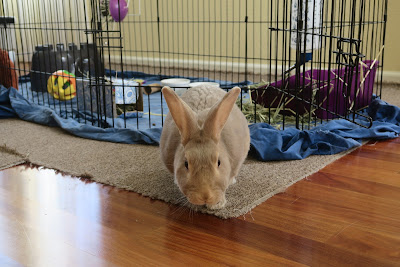 ... but I wasn't quick enough. Trouble was offended by the fact that I ignore his request (demand) and hopped two feet away, then slowly and deliberately turned his back to me, watching me the whole time to make sure I knew how offensive I'd been. 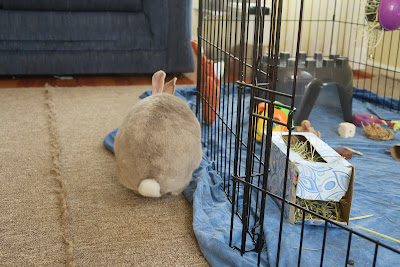 Of course, I apologized right away (after snapping that photo) and petted him until he forgave me. Steve walked by on his way to the kitchen, passing by the piano. That's where we keep the Healthy Snacker sampler set (affiliate link) that Steve bought Trouble for Christmas. Trouble darted away from me and started circling around Steve, begging for a snacker. 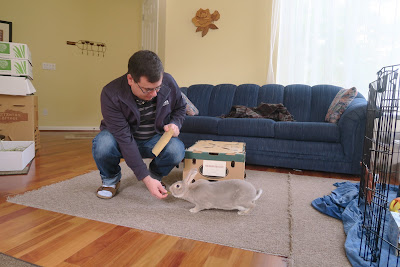 Despite living with us for 9 years (during which time we have NEVER taken a treat away from him after giving it to him), Trouble still darts away with his Snacker. 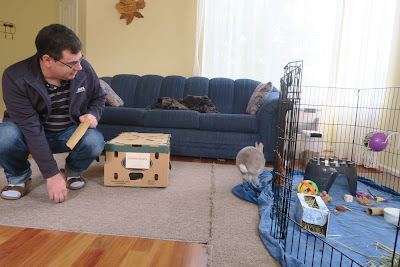 I headed back upstairs. Trouble moved to the rug at the foot of the stairs, watched Steve go back to his office, and then looked over at Trevor doing schoolwork in the family room. He played in his Cottontail Cottage for awhile, then made a stop at the Hay Buffet, and visited the litterbox. 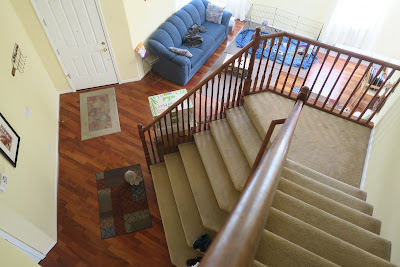 Around 9:30, Trouble joined me upstairs. 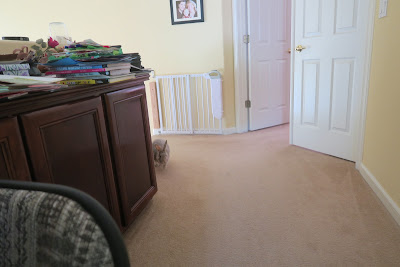 He spent some time playing in the master bedroom (allowed) and then snuck into the craft room (not allowed) before settling down beneath my office chair. Most mornings he does Predator Evasion Practice around this time, repeatedly zooming back and forth from under our bed, down the hall, then under Trevor's bed. As a prey animal, it's important to keep your escape skills sharp. 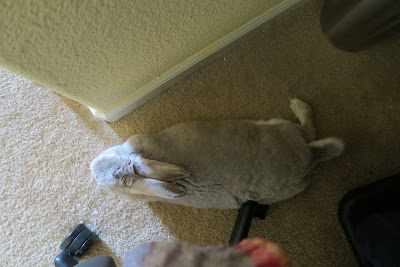 When Trouble is under my chair and wants my attention, he'll nose-bonk against my leg. I give him a scritch and that's usually good. But if I haven't gotten the correct message, or did an insufficient job petting him, he'll give a sharp tug on my pant leg. It's hard to ignore.

By the time I was ready for lunch, Trouble had moved under the folding chair which is now permanently next to my desk. The first time I put it there so Trevor and I could work together on something on my computer, Trouble made it clear that this was his new favorite nap location. And so it stays. 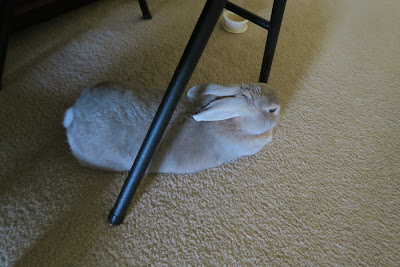 When I checked on him after lunch and PE (the three of us do a daily walk together after lunch now as part of Trevor's distance learning), Trouble was completely zonked. 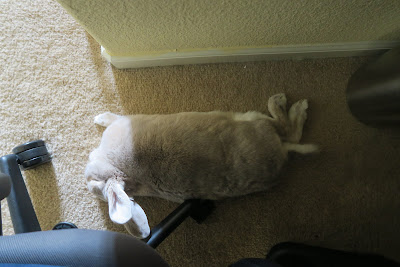 As I went about my afternoon in and out of the craft room, up and down the stairs doing laundry, and in and out the back door to do some gardening, Trouble stayed upstairs under my desk dozing.

I picked greens (carrot tops, dandelion leaves and flowers, beet greens, and mint) and scattered them throughout Trouble's cage. I used to put his greens in his food dish, but a few years ago I learned it is best to let rabbits use their foraging skills. So now I tuck greens in and around his toys so that he can discover them. 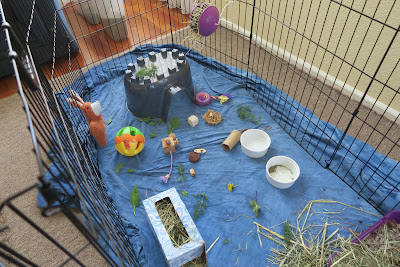 By 7:45 pm, Trouble was ready for playtime. Here, he's trying to get me to play catch with him with his beloved Spool. It is one of his very favorite toys. (And yes, I did put down the camera and play with him.)


Trouble stayed upstairs until around 8:00 pm. There he is on the landing. 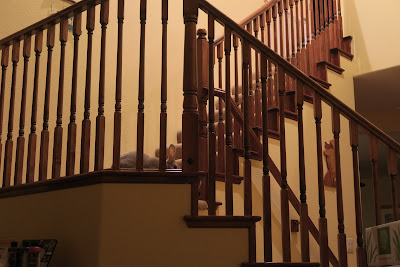 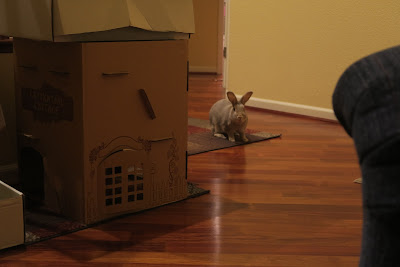 Around 8:30, I cleaned his litterbox, refreshed his water, and gave him his nightly banana ration (one very thin slice), which is one of his favorite treats. He hopped into his cage and immediately started foraging for his greens. Dandelions are his favorites, followed by carrot tops. He always eats those first. I locked Trouble in his cage and wished good night to the best bunny ever.
Email ThisBlogThis!Share to TwitterShare to FacebookShare to Pinterest
Labels: Rabbits, Trouble