Grapefruit Slice Felt Coaster: The Last (?) in the Set

I've had so much fun making and sharing my fruit coasters. With the addition of today's, which is a grapefruit, I'm up to seven. 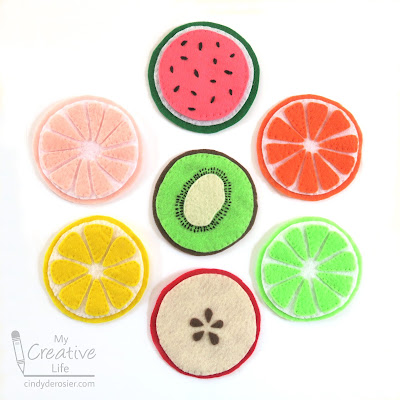 I think this coaster will be the last one (mostly because the rest of the common fruits aren't recognizable - or aren't round - when cut in half). Seven is a weird number for a set, but since we have a family of three, it's actually not all that uncommon for us to serve a meal for seven. Well, before COVID-19, that is. Now it's always dinner for three.

Here are the tutorials to make the watermelon, orange, lime, apple, lemon, and kiwi coasters. Read on for the instructions to make the grapefruit coaster. It's not grapefruit season (approximately December to May here in Northern California) so I don't have a new recipe to share, like I have with many of the previous coasters. But if you're looking for the best-ever thing to make with grapefruit, you can't go wrong with this amazing grapefruit sorbet. Affiliate links below. 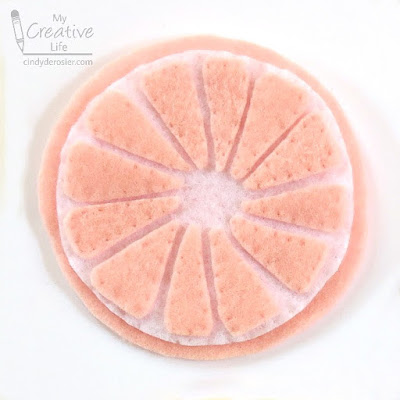 Cut out a circle of pink felt, approximately 4" in diameter. Cut out a circle of white felt that is slightly smaller than the pink circle. Then cut out another pink circle that is slightly smaller than the white one.
Set the large green circle and the white circle aside.
Fold the smaller pink circle in half, then cut along the fold. Fold each half again and cut so that you have four pieces total. Cut each piece into thirds, giving you a total of 12 triangles. The triangles don't need to be identical in size. Snip the edges of each triangle so they are rounded, then space them evenly on the white circle. If necessary, trim them until they resemble the segments of a grapefruit.
Use pink thread and a very short running stitch to sew the grapefruit segments to the white circle. It is easiest to start at the tip of one segment, work around it until you reach the tip again, and then move over to the next segment.
When you have attached all the segments, use white thread and the same short running stitch to sew the white circle to the large pink circle.
Email ThisBlogThis!Share to TwitterShare to FacebookShare to Pinterest
Labels: coaster, Crafts for Kids, felt, fruit, grapefruit, sewing